Well, it only took 30 years for this to happen: a port of the first Darius for the Mega Drive. The story behind it is nothing short of a fan-meets-developer's fairy tale. It all started with a fan-made conversion that was eventually picked up by Taito and M2, came out in the game roster of the Mega Drive Mini and was later fine-tuned for a last, definitive version released in cartridge format by a few different publishers.
Besides the absolute class of the porting job, this release allows players to experience the game in any of its three variants, which are directly based on the original arcade boards: Old Version, New Version and Extra Version. That’s the reason for the Darius Extra Version title, which by all means represents a step-up from previous ports Darius Plus and Super Darius, released for the PC Engine Hucard and CD formats a very long time ago.
For those who never played many shmups before or have lived under a rock in the last decades, Darius is an all-out space battle of the stylish spaceships called Silver Hawks against an enemy race empowered with huge battleships that mimic aquatic/marine creatures. Pretty much all aspects that define the series are presented in this first chapter, from the now famous WARNING messages prior to boss fights to the branching path mechanic that makes you choose different routes as you progress through the game - just remember to keep the ship off the centerline when the boss goes down or you'll crash against the rocky splits.
Darius for the Mega Drive as seen in the first release for the Mega Drive mini
(courtesy of YouTube user ElyPhanti)
Of course the basic gameplay does not change from one mode to the next. The Silver Hawk is able to fire a main shot and to drop bombs, naturally mapped to different controller buttons (A and B, respectively) or both to a single button (C). Buttons X, Y and Z have similar functions but with higher firing rates, just check the options to see how they differ. By collecting colored orbs released by specific enemies you're able to improve your ship's capabilities separately according to an upgrade bar that displays your current power level. Whenever each of these bars is completed you start a new upgrade cycle, and the default levels of the new bars will determine the ship's firepower when you are respawn after dying.
With red ords the main gun evolves from "missile" to laser and then wave. Green orbs make you go from bombs to twin (frontal bombs downwards and upwards) and "multi" (four-way bombs on both sides). Blue determines the efficiency of your shield, which goes from "arm" (green) to super (gray) and hyper (golden). Other orbs are hidden in the scenery and must be shot at to be released and picked up: the gray one gives a random bonus from 50 to 51.200 points (there's no logic behind it, don't even try to figure it out), the golden one serves as a smart bomb that clears the screen from bullets and cannon fodder and the orb with a tiny spaceship inside grants you with an extra life. By the way, scoring also grants you a single extend once you reach 600.000 points.
In terms of the overall design there's not much variety in the game's backgrounds, which recyle four themes over and over with different color palettes and textures (cavern, planet surface, inside fortresses and undewater). The music is equally restricted but what's there serves the game's motif very well. Fortunately these design limitations are duly compensated by all sorts of hazards from several types of enemy waves and huge bosses. Following the standard set by Super Darius, each stage has its specific boss so there's no repetition of bosses as is the case of the arcade original (the default setting in the options for BOSS TYPE is "26 bosses", as opposed to the expected 11 bosses of arcade Darius).
For every complete enemy wave destroyed you earn a few more points, in what represents the most important aspect of the scoring system in the Old and New versions of the game. Boss parts are also worth many points, so whenever possible try to dismantle them before going for the main kill. A mild degree of projectile milking is possible, just remember that the timeout cubes will eventually get angry and turn into extremely fast bullets that are nearly impossible to dodge. 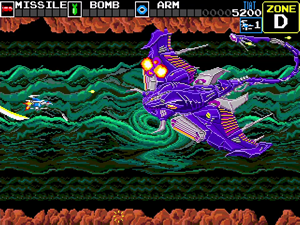 Tiat takes on boss Big Rajarnn at the end of stage D
And what's the difference between the three variants of the game included in the cartridge? The common ground between all of them is that there are no checkpoints, unlike the original arcade version. The main draw of the Old Version is that it has much stronger bosses, to the point where you must be really aggressive with some of them lest the fight drags until the timeout cubes become angry. New Version corrects this by toning down boss health and applying minor adjustments to the rest of the game. The definitive iteration is Extra Version, which completely reworks enemy formations in a few stages, alters some boss attack patterns and gives you one million points per spare life remaining at the end of the credit. Extra Verson is also the only one that allows the use of three continues.
The quality of this port is evident from the game itself but the people behind it certainly went the extra mile, as we can see from the boss rush campaigns for each mode and some nice functional aspects and tweaks you can apply to everything. Besides the choice for boss roster mentioned above, you can also alter rapid fire rates and choose from pilots Proco (default red Silver Hawk) and Tiat (blue Silver Hawk), which serves as an easy difficulty of sorts since it doesn't power down when you die. Note however that playing with Tiat doesn't allow players to register their results/initials. Finally, each mode has its own high score table and a soft reset function is available with A+B+C and START.
My best results in each mode of Darius Extra Version are shown in the pictures below, all of them one-life clears. For these runs I adopted the same route (ACFJOUV', always taking the lower path) so that I could better notice the differences between modes. Obviously beating the game in one life is only important for scoring in the Extra Version. 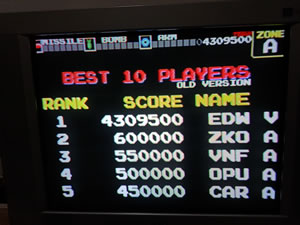 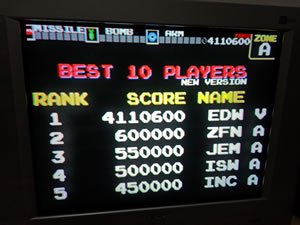 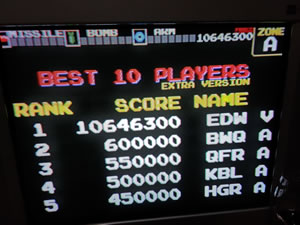 Final note: let's not forget that the Mega Drive has an awesome port of Darius II (a.k.a. Sagaia), which now makes for an amazing shmup duo with Darius Extra Version!
Posted by Edward at 11:21 PM