I don't have a nice recollection of Star Soldier. For a number of reasons I didn't enjoy playing it as I thought I would have, but regardless of my appreciation the game fortunately spawned a series that continued in the PC Engine platform with remarkable success. However, besides the main Soldier franchise a few spin-off titles were also released by Hudson Soft, and Starship Hector is one of them (the others are Star Parodier and – unofficially – Gunhed / Blazing Lazers). Known in Japan as Hector '87, it's probably the one with least similarities with Star Soldier, which is of course quite interesting in itself if you fancy the other games mentioned in this short paragraph.
With typical Hudson Soft tunes that fit perfectly into the Soldier universe, a creative boss gallery comprised of weird monsters and a difficulty level that doesn’t come off as extreme (provided you have a turbo controller, of course), Starship Hector is certainly bound to please NES shmup fans. All I can say is that I enjoyed it much more than I did Star Soldier, even with the occasional bouts of flicker and slowdown.
The setting is a mix of sci-fi and desolate landscapes. Your starship’s mission is to rid the Earth from alien biomechanical creatures that have dominated the planet after yet another world war. Each stage is labeled “history”, with levels that alternate between vertical and horizontal and are loosely based in ancient civilizations such as the Incan, Mayan and Egyptian empires. Gameplay sounds way more straightforward than any of chapter in the regular Soldier series, even though the general pace is a little slower. There are no power-ups to be found in Starship Hector, and the only items you’ll come across are energy-refilling pills expelled by ground totems hit by your ground bombs. 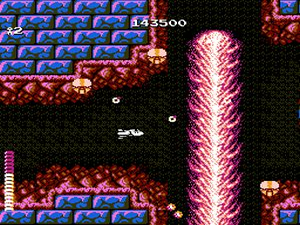 Pillars of purple doom in History 2
Ground bombs have a crawling abilitity and are fired with button A, whereas the main shot is fired with button B. It’s a variation of the classic formulas first presented in Xevious (vertical) and Gradius (horizontal), with each type of level characterized by its own set of rules. Horizontal parts are often full of walls and obstacles you need to avoid, which are naturally absent from vertical areas. On the other hand ground bombs will only damage ground targets in vertical stages, but they can destroy everything in the horizontal sections. The most important thing about the firing inputs though is that Starship Hector definitely requires a turbo controller to be properly played. Mashing buttons will get you nowhere, on top of giving you serious wrist injuries if you insist on doing so.
Each life comes with an energy/health bar that gets depleted as you receive damage from bullets and enemies. Bullets take away two to four energy cells, but collisions are deadly because if they don’t kill you right away you’ll be left with no spare energy, which means a life will be lost on the next hit. Unless of course you’re able to retrieve and collect the abovementioned refilling pills from the ground fountains. Some enemies have the nasty habit of trying to ram into you either in frontal attacks or by flying behind the ship, so take that in consideration when establishing target priorities while applying at least a minor level of crowd control. Killing the most dangerous enemies quickly is also essential to manage bullet count, especially in the vertical stages. Just beware of exploding mines coming up from below in areas that resemble ravines. The safest strategy is to steer away from them, since they’ll kill you instantly if they take you by surprise.
Perhaps due to the fact that a lifebar is in place, whenever you die you're sent back to the start of the level even during a boss fight. Since stages get tougher as you advance and enemy behavior becomes increasingly more erratic, as I hinted above the best way to go the distance is to play aggressively while memorizing the most threatening enemy patterns. Of course long checkpoints lend themselves to milking once you’ve got used to the stage layouts, and you certainly can try it with the three extends achieved with 200.000, 500.000 and 1 million points.
History 1 - The "Incaic" empire
(courtesy of YouTube user The VideoGames Museum)
Regardless of the amount of milking you can perform, the bulk of a high scoring run comes from the million points awarded to players who can uncover all characters from the name HECTOR, which are hidden exclusively in vertical levels below circular ground areas the same size of regular turrets. Hit these spots with ground bombs to reveal them, then hit them again to uncover the letters. There's more than one of the same characters within the same level, which gives you the chance to collect the bonus in stage 5 even if you miss one of hidden spots. Another bonus of finding them is that they're worth lots of points.
Concealed ground targets are also important in another context. In vertical levels a few extra hidden spots work as triggers that destroy all turrets in the vinicity, thus making your life a lot easier. These aren't as easy to find as the HECTOR characters though, so try to remember whenever you happen to come across one of these precious secret locations.
The picture below shows my final 1CC score, which is kept in the "Score" choice from the start screen. If you pay close attention to start screen once you've beaten the game you'll notice that it changes colors. If another credit is started right away you'll then be surprised by your avatar, which changes from the regular spaceship to an astronaut in a jetpack! It's just a cosmetic thing though, everything else about the game remains the same. Note: besides the main course in Starship Hector there are also 2 and 5-minute caravan modes for players who enjoy these extra scoring challenges. 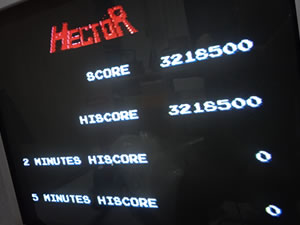