The history of this game is quite an interesting one, according to the info on Wikipedia. Developed for the arcade market by a French company, ExZeus was ported one year later for the Playstation 2 exclusively in Europe. Then it was published again for arcades, only now running on the more famous Sega NAOMI board, before appearing for the Nintendo Wii under the title Counter Force. After showing up on mobile phones, a decade later it was again taken out of obscurity by a joint release with sequel ExZeus 2 for Steam (PC), Nintendo Switch, Xbox One and the Playstation 4 (also on physical media).
ExZeus is a futuristic sci-fi rail shooter with a post-apocalyptic setting about humans retreating to the underground and sending powerful robots to the surface in order to repel the alien invaders. The art style in cut scenes and during the game is decent enough, if only a bit unpolished in parts. However, the gameplay itself has a very particular flow and doesn't play like the majority of rail shooters out there. You won't get anywhere just by performing circular movements in order to avoid incoming bullets, for example, as you would in games like Space Harrier. Evading and blocking enemy attacks requires a slightly different mindset here.
Besides what I mentioned above, going into the game blindly can be disorienting due to the shaking effect that takes place on pretty much every action you take. Frankly, it's hard to even know what's going on. Fortunately you can disable this by switching off all screen swing/shake settings in the options menu, and I strongly recommend doing this before even starting to play. If you're not from Europe a proper 60Hz option also gets rid of the screen shimmering related to the native PAL encoding system. 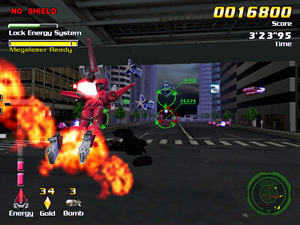 Calista below a passageway in the town of ruins
Every credit starts with the choice of a robot. Sophia is the more balanced of them, with equal stats for power, speed, weapon and armor. Dynamis is the strongest one at the expense of speed, whereas Calista is the opposite. Since the only function of button △ is to toggle the view from behind the robot to a little above/behind its position, the actual gameplay uses five buttons: × fires the main gun and charges the laser whenever it's available, □ deploys the lock-on attack, ○ drops a megabomb and L1/R1 provide fast evasion maneuvers left or right (also accomplished with double taps). Charging up the laser happens automatically, with two available power levels that render you invincible when this attack is unleashed.
Death can happen in two ways: by allowing the energy bar to deplete completely or by timing out the stage (a message will warn you to hurry up). An uncommon feature of ExZeus is that the robot actually has two health bars instead of one: the uppermost gauge on the top left is the shield and serves as the primary barrier against damage, whereas the leftmost indicator down below represents the actual player energy, which starts going down only when you have no shield energy left. Both shield and energy have specific refill icons in the item gallery, which also consists of lock-on energy, speed boost, gold (to purchase upgrades/refills between levels) and power-up (increases the firing spread). Most of them are randomly released by destroying enemies. You just need to fly close to the items to pick them up, they will be automatically sucked into the robot when within a certain distance.
The reason why circling around isn't effective in ExZeus is that enemies have attack routines that are mostly independent from aiming directly at the player's position. These attacks are also unusual, with melee-like laser approaches and bullets fired in clusters, yet sometimes you need to face heavy artillery that leaves trails of energy behind. Some of these enemies must either be destroyed or avoided at all costs, especially since successive or powerful blows can drain a huge chunk of your energy. On the other hand, if enemies are destroyed after they have fired, all their bullets will turn into gold. Additionally, enemies destroyed in quick succession add to a hit combo that gives you a few extra points, in what's the only worthy aspect to point out in the game's rudimentary scoring system.
Gameplay on bosses is a tad different. They don't fire a single bullet at the player, a task that's left for occasional enemies that appear throughout the fight. All bosses have a set of attacks that include all sorts of variations of laser beams, fire breathing and melee strikes. The general strategy is to find their rhythm and hit them between these attacks, but note that whenever they're blue they're invincible to regular fire and only vulnerable to lock-on shots. The most important thing to have in mind, however, is to not panic with their initial levels of aggression and the inevitable loss of your shield. For some mysterious reason boss attacks have an extra reach regarding the shield, which is meant to be lost during the fight. Once the shield is gone it's perfectly possible to take advantage of the gaps in their attack patterns, just remember to use L1/R1 to quickly move around when needed.
Continuing through the town of ruins and the cave to hell
(courtesy of YouTube user 10min Gameplay)
I admit it took me a while to finally understand what I just mentioned above. After all, ExZeus is keen on draining the player's resources in a snap if you're not careful enough. One example is the power-down penalty whenever you get hit. It takes two power-ups to achieve the maxed out 5-way spread shot, and normally for each hit the robot takes you're downgraded one level, first reverting to the 3-way pattern and then to the default single shot. However, if the blow is too powerful you'll be instantly sent to the default shot, and this can be a severe handicap in certain areas. At least the game throws more power-ups a few moments later, except during boss fights.
My primary assessment of ExZeus is that the price of admission to the fun side of the game is a bit too steep. Even though the gameplay is rather unorthodox, after a while I started digging the intensity, the flashy nature of the visuals and the fact that the enemy gallery keeps you on your toes at all times. The music is energetic and vibrant, although not memorable as a whole. Most of the levels take place in wide open areas, but every once in a while you'll be flying inside closed chambers or tunnels. Cities, forests, icy ravines and even an underwater passage complete the environment selection. The upgrades to be purchased with your hard-earned gold are extremely helpful, with the most important one being the extra energy block (you can have a maximum of six blocks). It's also possible to increase the length of the shield gauge, but I always preferred to spend the rest of the cash on shield and lock-on shot refills.
Difficulty settings in ExZeus are spread across a spectrum that grades alien and boss attack speeds (50%, 75%, 100%, level progressive and game progressive). 75% is the default, which I considered to be the Normal difficulty setting. There's also something called "collision accuracy", which ranges from 50% to 100% and has 75% as default. I played on full defaults (75% in all three settings) and got the final 1CC result below with robot Calista. Quick observation: ExZeus on the PS2 is yet another case of a game where the score isn't reset when you continue. 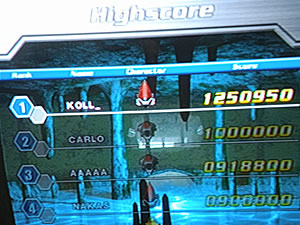 When the time comes I'll probably tackle sequel ExZeus 2 on the Playstation 4.
Posted by Edward at 9:13 AM