After its debut on the Super Famicom, it wasn't expected but it was certainly nice to see the fourth chapter of the Parodius franchise finding its way to both 32-bit platforms. Also unofficially known as "Chatting Parodius", 16-bit Jikkyou Oshaberi Parodius introduced a few new features while considerably increasing the character roster. Both 32-bit ports were released only in Japan but received the ~Forever with Me~ subtitle while applying graphical, audio and performance improvements with minor extras on the side. The constant chatting of the narrator is of course kept in all its comical (or annoying) nature, yet you can still shut him off with a specific switch in the options menu.
This is the third version if this game that I play, having previously looped the SNES original with Soitsu and the Saturn port with Upa. This time I had the idea of just pressing START from the opening screen until entering the game, which naturally made me begin the adventure using the classic Vic Viper ship from Gradius, the primordial mold upon which the Parodius series is actually built. The level of parody and wack with Gradius and other Konami games has obviously gone a long way ever since the franchise started, so players can obviously expect all sorts of bizarre enemies and situations here.
The menu in Japanese is a bit intimidating, but as I mentioned above it's actually quite simple if you just want to dive directly into the game. Choosing the first option will lead you straight to the single player character selection (the second option activates 2-player mode, which now works in co-op as opposed to the alternate turns of the 16-bit original). By default there are 16 selectable characters, but you can also choose secret players Dracura (sic!) or Kid-D(racura) with the aid of a special button code to be inserted at the main Japanese menu (←, →, ←, →, □, ○, ↑, ↑, ↓, ↓, L2, R1, L1, R2, ○, □, ←, →). You could also do it the hard way, but that's just stupid and doesn't make any practical sense (keep reading). 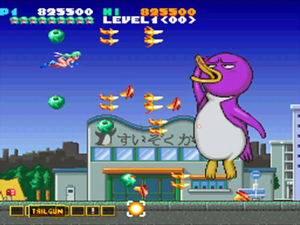 Memim against Penkuro, the second boss in the nonsensical Boss Rush of stage 7
Once the character is chosen you must select between auto or manual power-up mode. In manual players are supposed to activate the desired upgrade in the weapon array just like in any Gradius game, thus having full control on how the character is supposed to evolve. Auto power-up mode, on the other hand, gives the game almost full control of the power-up process, leaving little to the player to decide. In a nutshell, it will activate only one speed-up (or two in the high speed stage) and prioritize laser over double, so if you want to have an extra speed-up or use the equivalent to the double shot just activate the power-up as usual. As always, upgrades in the weapon array are shifted by collecting orange capsules, while inputs consist of shot/missile (mapped to the same button by default), power-up and bell power.
What's mostly interesting in Parodius titles, and particularly in this chapter, is the fact that the chosen character can have a huge influence over the difficulty and the scoring potential of any run. This gap is somehow shortened with practice, but it's undeniable that characters like Soitsu and Dracura have the primary edge both for survival and for scoring. When they are maxed out in power bosses become less troublesome and hidden fairies can be found and collected more easily. Fairies are after all a great source of scoring since each one is worth 10.000 points. The same conclusion about the scoring aspect of the game sort of applies to the other main source of extra points: yellow bells.
Reminiscent of the TwinBee series, bells are released regularly in between power-up capsules and are mostly generated in the yellow color. However, at every four shots taken they will switch to a different color that endows the character with a special power: green (inflate+invincibility), white (bullet-cancelling kanji messages), brown (three bullet-blocking barriers), purple (turns all small enemies into power-up capsules or bells) and blue (screen-clearing bomb). Special notes: green forbids you to fire or collect any bells; green and white are instantly activated when collected and cancel all defensive upgrades; brown and blue bells are stored for later use and need to be triggered with the bell power button; whenever brown and blue are in stock you're forbidden from using the character's shield or force field.
Together with hidden fairies, yellow bells are the bread and butter of the scoring system. Don't let any bell fall of the screen and see the value from yellow bells quickly increase from 500 to 1.000, 2.500, 5.000 and then 10.000 points each. If one of them is lost this value is reset to 500. Juggling bells is obviously easier said than done, especially when you destroy those mid-sized enemies that often appear right after the pre-stage and explode into lots of bells of different colors, or during the whole high speed level themed after Lethal Enforcers. The total number of fairies collected can be tracked in a special option in the menu, and one of its purposes is probably to see how close you are to finding 140 fairies in order to naturally unlock secret characters Dracura and Kid-D. Damn it, Konami, at least we can thank you for the button code, huh?
Soitsu on auto power-up mode
(courtesy of YouTube user Tiza)
When compared with the 16-bit original, 32-bit Jikkyou Oshaberi Parodius (often abbreviated as JOP) is certainly a completely different beast. The complete elimination of slowdown is the obvious highlight, but the extend routine that goes beyond the million points is another important change since now you can amass many more extra lives as your score goes up (first extend comes with 20.000, then you get a new one after every 100.000 points). Since the game is much more easygoing than any chapter originated in the arcade platform and has a considerably mild rank progression, JOP is also the choice to go if you're new to the series and you'd like a more approachable starting point with many characters to choose from.
Just like with the other versions of the game, this port has a built-in checkpoint-based save function. Three save/load slots are available at the press of the SELECT button. In the title screen you also have the choice of two new special game modes: Omake 1 is a completely new single stage where you're supposed to get high scores, whereas Omake 2 works as a racing mini-game where the objective is to get to the end of the area as fast as possible. Even though both 32-bit ports appear to be very similar, there is a specific switch in the options screen that alters the gameplay significantly in each version. In the case of the Playstation this tweak is called "Accident", and its function is to add polygonal-based bonus areas to the end of each level. On the Sega Saturn this is replaced by "Extra", which changes enemy formations completely. Besides these interesting tweaks to the base game, both ports allow the OH! bogus power-up to be replaced by a slot machine for bells if you turn "Slot!" on. As for "Duet", "Ikari" and "Nage", they are specific tweaks for co-op play.

Click for the main menu translation for the Normal game in Jikkyou Oshaberi Parodius - Forever with Me on the Playstation
Despite the comical aspect of the ship, playing with this version of Vic Viper is actually very much like going back to the first Gradius. On the other hand I never thought much of its weapon set-up for a Parodius game prior to now, but it was interesting to notice after all these years how good it actually is against some of the bosses. I played on full defaults (difficulty 4, Roulette ON, Slot!/Accident/Revival OFF, Oshaberi ON) with auto power-up mode and reached stage 3-2 with the result shown below. Note: while you're playing you can always see your difficulty level and loop below the indication for the hi-score at the top of the screen. 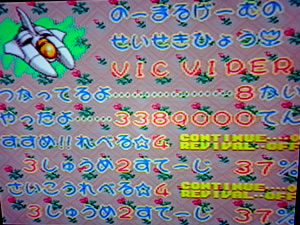 Next in line is definitely Sexy Parodius.
Posted by Edward at 11:24 PM