It's a cyclic thing. Every now and then people start claiming that "the old is new again", throwing nostalgic testimonies everywhere. Video games are no different. A game like Spacewing War fits the bill and is certainly bound to tickle a few soft spots if you're a fan of old systems like the Game Boy and the Game Boy Color. Even the cover art of the glove that comes with the Playstation 4 release evokes this association, to the surprise of younger audiences puzzled by its odd layout. The fact the game design does stick to primitive graphics where each pixel is clearly visible on the TV screen isn't a surprise though, just like the 4:3 ratio adopted by the developer.
Visual simplicity notwithstanding, Spacewing War doesn't do anything to deviate from the very basic rules of a shmup, i.e. fly a spaceship, shoot enemies, defeat a boss and advance to the next stage. That's the structure of the initial and main game mode (Story), which comes with 7 levels divided in several sections each. The first one is very familiar since it's filled with landscapes that seem to have been taken directly from Super Mario Bros, only you're flying instead of jumping over pipes and grassy platforms. Later on you'll see echoes of Wonder Boy and Mega Man, as well as wacky bosses certainly inspired by the likes of Parodius, all rendered in a dual color style that can be changed any time by pausing and choosing a different color palette.
In Story mode a brief sequence of panels introduces the Spacewing ship and its mission to repel alien invaders from planet Mavros, then a short tutorial shows almost everything you need to know to play the game. Select one of four weapons with △ and shoot with ○ (single shot) or □ (autofire). Weapons consist of a pea shot, a two-way boomerang, a powerful bomb or a thee-way + backward shot combo with reduced reach. A health meter is given for each life, score-based extra lives are given at every 20.000 points and deaths happen when the health meter depletes or when you get crushed by a scrolling obstacle. There are no power-ups to be collected, and the only items you'll come across are hearts (for health refills), coins (bonus points), 1UP (extra life), a large S (extra shield) and a large H that increases the firing rate slightly. 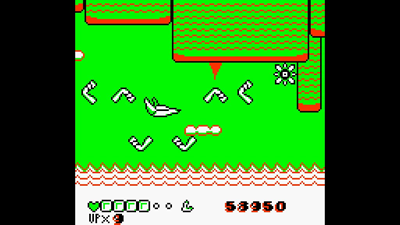 Battle against the Avanto-darks with a green Spacewing
Some aspects of the gameplay are a little more intricate, such as the fact that you can be damaged by the explosion of your own bombs (the third weapon). Since they travel a certain distance and explode, players need to pay special attention in levels where the scrolling is faster than the bomb displacement (they go backwards a little prior to exploding) or in that level where you're being pushed forward by snow or rain. Some levels also have specific gimmicks, such as bombs that explode blocks à la Bomberman and bells that clear access gates. These are harmless though. Minor shifts in scrolling speeds and small portals that lead you forward can also appear here and there.
If only Spacewing War had a more enthusiastic and uplifting music perhaps it wouldn't be so underwhelming. The idea is interesting and the lighthearted humor is okay, but the action is stale, the sound effects lack punch and the game's execution follows a flatline that never deviates from average or mediocre, on top of being really confusing with walls at times. The colored star you take in the final stage is a glimpse of what the game could actually be, with an all-out destruction effect that feels great but is nerfed by the lack of opposition from the enemy gallery. This star upgrade seems to be there just to grant you lots of lives prior to facing the final boss, which is the only one that proves to be a real challenge.
By completing Story mode you unlock two additional game modes, which will also unlock further modes if you beat them. The extra modes available are:
Release trailer for Spacewing War
(courtesy of YouTube user and publisher eastasiasoft)
I beat Story mode, Captain Uufoo's Quest and all Break the Targets in the Normal difficulty. Then I got lazy and bumped the difficulty down to Easy to get the other unlocks and see what those two mysterious switches in the Options were. One of them turned out to be "color mode", which does away with the monochromatic color palette thing and paints the whole game with regular colors. Note: Normal difficulty has 6 health slots, Easy has 12, Hard has 3 and Extreme has only 1. On Easy your own bombs don't harm you anymore, and on Hard/Extreme you can't refill more than the initial amount of health even though there are 6 slots in the health meter.
Spacewing War keeps track of only a single high score for each game mode, regardless of the selected difficulty. Below are my final results in the Normal difficulty for Story mode and Captain Uufoo's Quest. I played them only once, which means they were both first attempt 1CCs. The high score shown at the start screen will always be the one you get for Story mode. 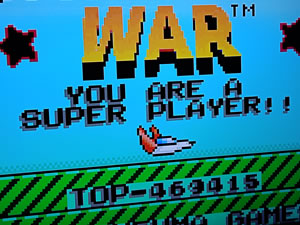 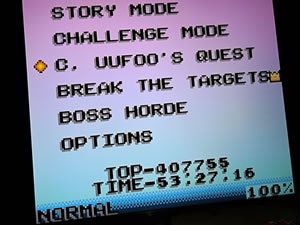