Having never seen a Game Gear personally, it was always hard for me to get a feeling for this long dead handheld system. All I've ever known is that it had a serious problem with battery life. GG Aleste is my first indirect experience with it, thanks to the fine folks at M2 and their undying love for the Aleste series. Part of the M2 Shottrigers series, Aleste Collection brings back all chapters of the franchise originally released for the Sega 8-bit platforms plus a brand-new sequel developed with the Game Gear in mind. Unfortunately for many shmup fans, this means none of the MSX or 16-bit games are included. Reserved for a further release, perhaps?
All the old titles in Aleste Collection are somewhat rare in their original incarnations, so this release is an excellent way to experience them in a real console. As usual, the amount of tweaks and gadgets provided by M2 in the porting process is a great differential. The only criticism I have on the Eastern Playstation 4 version is the lack of a language switch for the menus. They're partially in Japanese and partially in English, which in the end makes no sense at all. Anyway, once the desired game is selected from the initial screen, just press the touch pad button in the center of the controller to go to the options.

Click for the option menus translation for GG Aleste in the Aleste Colletion
GG Aleste was the first title made by Compile for the Game Gear. Generally regarded as technically impressive for the system, it adapts many elements seen in previous entries in the series such as Power Strike (also included in the Aleste Collection) and MUSHA. Even though GG is widely considered to be an acronym for Game Gear, it's in fact a short for Galvanic Gunner, in a very smart move by Compile to firmly position its well-known shooting brand in the new platform. It must have worked somehow, after all GG Aleste II followed a couple years later and now we have the brand-new GG Aleste III out in full 8-bit glory for the current generation of HD consoles. For many shmuppers GG Aleste III is the main reason to own the Aleste Collection.
Adapting the frantic Aleste gameplay to the small screen of the Game Gear did require some cutbacks, but nevertheless GG Aleste manages to keep the atmosphere seen in previous chapters. It might lack the enemy density, but everything is there otherwise. Only button 1 is used to fire. Amidst the constant arrival of aerial foes and several arrangements of ground turrets, power-ups are released either by incoming carriers or at specific ground spots. The main frontal shot is upgraded by taking power chips, small tokens that fall down the screen pretty fast, whereas the auxiliary shot is acquired and changed by picking up green icons with letters. There's L (Laser), H (Homing), W (Wave), D (Defence fire), N (Napalm runner) and S (mag Spread). Auxiliary weapons can only be upgraded by taking a red P power-up. 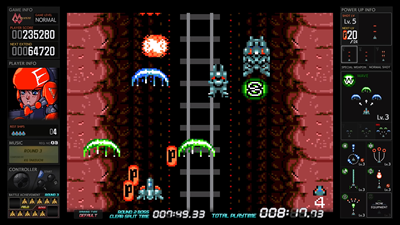 Where have we all seen this before?
There's nothing particularly outstanding about the stage design, which follows the rulebook of standard backdrops with a boss waiting at the end of all eight levels. It's all very well made though, with fast and varied scrolling directions all around. From a floating space city you go directly to an ocean stage, then followed by a ravine passage in the third level. The graphics for this specific stage are lifted directly from MUSHA, as are other parts of the game such as the intro panel showing heroine Ellinor preparing to take off. A huge battleship must be neutralized in stage 5, and in stage 6 you start a long stretch over the surface of the moon towards the chamber of the final boss. A bonus area appears at the beginning of stages 4 and 6, where you're expected to destroy a series of waves that release power chips and power-ups (kill them all for a special reward of 200.000 points each).
Despite the shooting fun and the decent amount of action, GG Aleste's main game mode is clearly an easy shmup that can be beaten almost blindly if you're an averagely skilled player. I beat it on my first try solely by using the homing weapon, for instance. The punishment for dying is losing one power level of each shot (main and auxiliary), extra lives are granted at every 100.000 points and the invincibility short window you get when taking an item is certainly something you can work into your play style with a little practice. That said, the gadgets provided by M2 are an excellent help to understand these and many other aspects of the game, so I definitely recommend keeping them on screen at all times (just to have an idea of how useful they are, in the original Game Gear game you could only see your score in between levels).
Release trailer for Aleste Collection
(courtesy of YouTube user LimitedGameNews)
Aside from gadgets and expected features such as replay save/download, M2 also provided this collection with several other improvements worth mentioning. One of them is the so-called "comfort mode", which takes care of the sprite flickering and removes all the original slowdown when activated. Another welcome tweak is the possibility of applying an obscene amount of rapid fire to the shot input, capable of obliterating bosses in less than a second if you're using the appropriate weapon. Of course it's not necessary to use these rapid fire settings to beat the game, but it becomes a mandatory resource if you're trying to climb up the ranks in the online/offline scoreboards. Since GG Aleste can be indefinitely exploited for points during certain boss fights (3rd, 6th), completion time is the only performance tracking made available by M2.
The main game mode I mentioned above is aptly named Normal. However, apart from opting for Normal you can also select Special before starting the credit if you want to try a much harder challenge. In this mode every single flying enemy (except for mid-bosses or bosses) releases a suicide bullet upon death, which turns the game into a real nightmare very soon. Some weapons are capable of nullifying bullets but that's it. For example, in this mode there's no such thing as a sealing point-blank distance, a resource generally used in many other shmups to avoid suicide bullets from appearing. Those drones will shoot you in the face no matter how close you are when you kill them.
Once I beat Normal mode a couple of times I dedicated myself to improve my completion time with rapid fire set to 30 shots/s. As of the writing of this short essay I got the final result below, with no milking whatsoever and comfort mode always ON. I did get a better completion time after this one, but for a mysterious reason it didn't get transferred to the online leaderboard. I wonder if it's a system fluke or if it's because I got a slightly lower score then the one below. 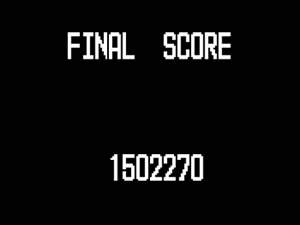 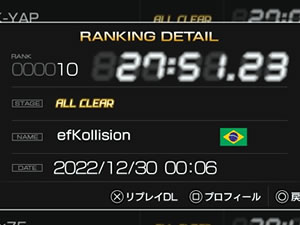