Keeping up with my campaign to play all the classics I never had the chance to play in the past, this was the time for Fantasy Zone, one of Sega's most beloved franchises ever. I started my journey with the Master System port, since the Master System was one of the platforms in which the game succeeded the most.

Let me start this by being honest and saying I always thought this game was not worth my time. Back when the SMS was on its peak, either I wasn't able to have access to a copy of the game or it didn't attract my attention that much. What a fool I was, my friends... Not only have I really enjoyed the time I spent with this shiny, addictive little title, but it also ignited my hunger for all other existent ports and sequels, most of which I already own. 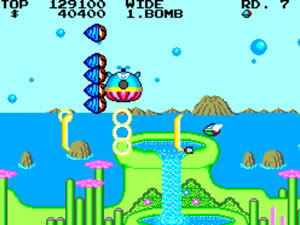 Any screenshot will tell you how colorful Fantasy Zone is. Combine it with the catchy music (love the music for the 6th stage!) and the twitches in gameplay and you have a very original shooter. For starters, scrolling is controlled by Opa-Opa the player, who can go left or right in his quest to destroy the enemy bases (or generators, some might say). When all of them are gone, the boss appears and must be defeated for the next stage to be played. Weapons can be upgraded with the coins you get when you go into the shop - an icon that appears from time to time. The most powerful items can be used only once or for a limited amount of time, and that gives the game an strategy feel that must be honed if you really want to perform well.

Trying to convey in words how addictive this game is ain't no easy task, I'll tell you that. I have no idea whatsoever of the most intricate differences between the SMS port and the original game, I just know they exist (main one: the bosses for the 4th and 6th stages change from their original forms to a big fish and a giant turtle - EDIT 6-NOV-2010). In the original, for instance, you have a radar that tells you how many enemy bases are left to destroy. Here the boss fights take place after the stage fades, an obvious constraint imposed by the hardware. Being as simple as it is, the SMS version still amazes for its ability to suck you in. There are no continues, so when you start out you can definitely expect lots of game overs followed by new plays. 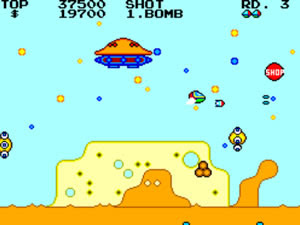 It took me a little while to figure out which special weapons were best. This is of course part of the fun, so I won't tell starters which ones they are. There is something I learned from the web though that is not mentioned in the manual and I think everybody should know up front: in order to have infinite ammo on all main special weapons (except bombs), buy all the speed power-ups when you have enough money (big wings, jet engine, rocket engine, etc.). It's possible to adjust the speed before leaving the store!

At the end of the game each remaining life is worth 1.000.000 points. That's why it's easy to get to the situation you see below, where the score counter stops at 9.999.990. So I'm adding two photos here, one for my frozen score and the other showing which round I reached (21 equals loop 3-5).

Next: Fantasy Zone II.
Posted by Edward at 7:41 PM