Weird and wacky are qualities that come to mind when someone thinks about the Parodius series. Only recently I knew that it was actually born in the MSX computer game roster, and that Parodius Da! was the second outing in the series. The important thing to have in mind here is that, for its time, Parodius Da! was a huge step in terms of graphics and gameplay, no matter in which of the various platforms it ran on.

For Gradius fans, this Gradius parody was a wonderful idea. Why? If you don't bother the way things are set in a Parodius game - theme, design, music - it's certainly sure that you have another Gradius game in your hands! Later on the series started making fun of other Konami titles as well, but the emphasis on Vic Viper's adventures was never abandoned. Lucky me! 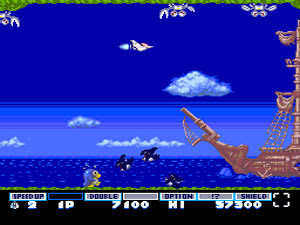 It can be said that the PC Engine port for the arcade game holds up well, besides the fact that 2 out of 10 stages are absent (the moai spaceship and the penguin ice cave stages). It's got everything gameplay-wise, and while the graphics lack lots of parallax they don't take a huge hit. The only part where the lack of parallax really bugged me was in the volcano stage... I died a lot crashing on volcanos and trees because it was a bit difficult to separate foreground from background. And you know, Parodius games are well known for being very colored!

Having beaten the superior SNES version with Vic Viper, this time around I approached the game with Pentaro the Penguin, one of the four characters with which you can play. I didn't know you can only get 3 options with him instead of 4 - this also happens with the Twinbee ship. I didn't have much time to see if it's the same with the Octopus, as I really don't like that ripple laser at all. Pentaro's daggers are a lot more effective. For me bells are exclusive for scoring (worth 10.000 points after the 5th bell in a row), but sometimes it's nice to get the one that gives you temporary invincibility. 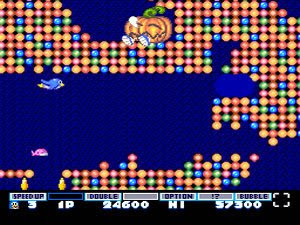 Over all the characters I still prefer to play with Vic Viper, for the Gradius-like atmosphere you get. Additionally, Vic Viper's options will just follow your ship without sinking back to the hitbox when you stop moving. This happens with all other characters, something that's annoying and gives you trouble in places like the candy wall of the 3rd stage. There's an extra special stage that you can play out of the main game, but I really didn't bother trying. I noticed though that it contains music from the stages that were left out of this port.

A quick look into further entries in the series will tell you that the formula presented in Parodius Da! was improved a lot in later titles. I like to play game series in chronological order, and I definitely look forward to when I finally get the chance to face Otomedius Gorgeous in the Xbox 360. It's gonna be a long and fulfilling ride, I'm sure!

My high score on NORMAL, playing with Pentaro (loop 2-3): 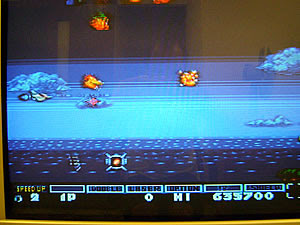