You know there's something terribly wrong when a software company launches an unlicensed title that has one name in the box and a different name in-game, even more when one of the names is spelled wrong. The game in question is the horrendous Earth Defense or "The Earth Defend", as you'll see when you power it up. Just to get it out of the way, don't try to play this game with a Sega 32X setup, because it just won't work - you'll have to use a plain good old Mega Drive.

Of course name problems should never be an indication of game quality, as the outstanding "Lightening Force" will surely tell you. However, and without incurring in its uninspired technical achievements, Earth Defense is notorious for its atrocious programming, which is responsible for such things as almost permanent slowdown, high score resetting with RESET button, unbalanced weapon distribution and boss disappearance followed by an irreversible game halt in the first stage! 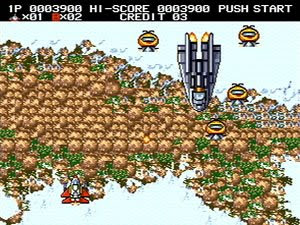 The gameplay is bland and overall very boring. Two types of weapons allow you to use a forward blade-type shot and a spread shot. The first one is useful from the start, but the spread shot only shows its potential after 3 power-ups collected. There are also icons for options, 1UPs and bombs/shields (that work in the same vein of the mecha arrow flash in Arrow Flash). All icons appear randomly after you destroy a trademark enemy, but the AI is so awkwardly unbalanced that you might sometimes get 3 or 4 lives in a row, or spend a whole stage collecting just one type of power-up. If you get to the bosses with a good power level they will give in pretty fast, especially if you fly over them using the "arrow flash" shield. Otherwise, if you die and have to use the stock weapon, be prepared to spend some long minutes fighting bosses.

As far as unlicensed 16-bit shooters go, this one carries a strong resemblance with Magic Girl in the way enemies appear on screen. In fact, if you exchanged the main ship's sprites it would be hard to notice which game is which from a screenshot. Slowdown feast aside, at least Earth Defense doesn't suffer from the awful frame rate Magic Girl is famous for. Another annoying feature is the way controls are implemented. It is common knowledge that the crushing majority of shooters use the B button for bombing, but here you have to press the C button. Human conditioning is really amazing: I lost count of how many times I died when trying to panic by pushing B! 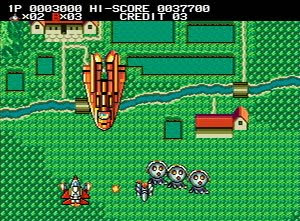 This game has a misleading nice intro and tricks you into believing it could actually deliver more than it does by allowing 2-player co-op action (I don't even want to imagine how bad slowdown would get in this mode...). There are also no useful remarks to be made about the music, except for the rather cool 5th stage BGM.

At least it makes for a mild challenge if you want to beat it with just one credit. I've always heard horrible things about other AV Artisan/Realtec unlicensed Mega Drive releases such as Funny World & Balloon Boy, and that's why I feel relieved to know that Earth Defense is the only shmup they ever did for the console.

Here’s my 1CC high score for this turd (played on NORMAL): 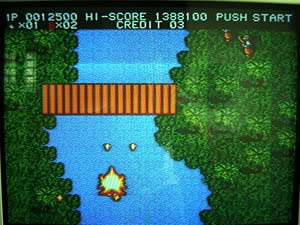