Wow, a Mega Drive launch shoot'em up! Wouldn't that cover make you anticipate the best from it if you lived in 1990 and were to experience it for the first time? That monster in the box is just the last boss of this brick hard game, one that I honestly overlooked for years, deeming it as another run of the mill effort that didn't really show what Sega's 16-bit machine was capable of. Come on, back then we had Thunder Force III and Darius II. Who would give a shit about a vertical shooter with poor visuals?

Only recently did I dust this game from my glorious MD shelf in order to see what some people regarded as one of the most underrated shooters ever, even for a port of a very famous arcade game. Damn, was I really blind for all these years? Was I to swallow my pride and finally pledge some devotion to a title that I could not beat (or don't remember beating) when I was a teenage 16-bit video game nerd? 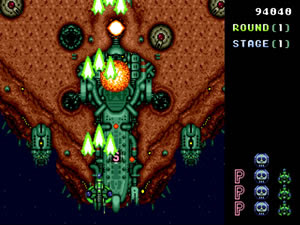 Graphically, Truxton is a mixed bag of poor backgrounds, some nice textures in the middle and great boss designs/battles. From what I've seen, it's not that far from the arcade original. The 1st BGM is one of the cheesiest yet most adequate space-themed songs ever, and I also love the tune for the last stage, for it does convey the danger of reaching the final boss amidst lava and spikes while being extremely cool.

Upon firing up, Truxton does not try to overwhelm anybody. In fact, it does quite the opposite: what you get is a slow lone spacheship with a weak vulcan weapon flying over a dark blue background dotted by tiny sprites that should resemble stars. This must be one of the most modest initial stages I've ever seen in a shooter, and at first it seems frightening because it takes a little while until you reach a different scenario.

Fortunately, the slow beginning later on develops into a more action-packed flight, as you start collecting speed-ups (S) and power-ups (P). Your firepower is augmented with each 5 P icons collected, to a maximum of two upgrades. After that the power-ups are stocked for an eventual respawn. Three types of weapons are at the player's disposal and can be changed with the appropriate icon: the red one is the standard vulcan, the green one is a straightforward shot and the blue one is a visually stunning laser beam that latches on more powerful enemies until they are killed and covers almost the whole screen when maxed out. Each weapon has its strenghts and weaknesses, but I found myself using more of the red, due to the shooting shield that surrounds the ship with maximum power, and the blue, in order to protect myself from the space enemy blizzard that takes over the screen during the last stages. Let's not forget about Truxton's famous bomb, which has the shape of a skull and obliterates all bullets and weak enemies during its brief detonation time. 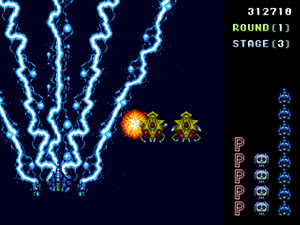 This is a game that tricks you into thinking it's easy. Enemy bullets are slow at the start, and there are instances in which no enemies at all approach you. All 5 stages are really long and demand some memorization for you to succeed. One/two speed-ups are enough in order to dodge the incoming fire, but to maximize your score it's necessary to take all speed-ups (after the 5th one you get 5.000 points for each additional icon). The problem with this is that the ship gets too fast and makes it almost impossible to maneuver your rather large hitbox during boss battles. And they're all huge, menacing and tough to dispatch! The game also has a rank system that boosts bullet speed if you perform well, and the last two stages offer some of the most difficult shmupping tasks you're likely to find among all Mega Drive titles. Unfortunately, that stems mostly from a horrible choice of colors, one that makes it almost impossible to see the bullets and provides an unfair extra difficulty that ultimately hurts the overall experience.

To the player's relief, one extend is granted at 70.000 points and then for each 200.000 points after that. Special 1UPs are triggered if you reach certain areas with the right weapon and destroy a central pod that moves upwards when shot (pay attention to some 2UPs though!). With so many extra lives, it's perfectly possible to fill the life meter to the top if you play well enough, stocking some precious ammo against the final waves of the enemy forces. Make no mistake, you'll need it: this is a tough game.

I could reach the first stage of the second loop with the score below (NORMAL): 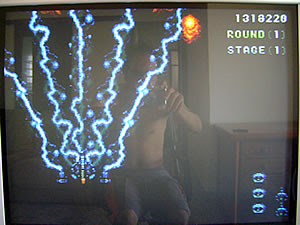