The Sega Dreamcast was released in 1999, but I only got mine roughly 2 years ago. I had never seen one in action, and Giga Wing was the first shooter I bought for it. Imagine my reaction as this game was my introduction to bullet hell, one that gave me countless days of fun and punishment as I strived to beat it. By then I was unaware of genre conventions, so I was only able to do it while tweaking the starting number of lives and bombs. Of course there was no merit in that accomplishment, but I didn't know it then. And that's the reason why recently I dove into Giga Wing again in my pursuit for an honorable default 1CC.

At the time of its release, Giga Wing was memorable for standing as a separating line between those who understood the new era of shmups and those who didn't, simply because it was the first bullet hell that got a decently localized US home port. Casual gamers and stupid reviewers trashed it as having no replay value, simply because you're allowed to breeze through the game in less than 20 minutes on the basis of unlimited continues from the get go. Misconceptions exist in any media, but believe me when I say I get furious when I hear or read stuff like this. Players felt cheated for the wrong reasons, all of them showcasing the growing gap that would eventually exclude shooters from mainstream gaming. They should've felt cheated, for instance, for not knowing there's a 7th stage accessible only by beating all 6 stages on one credit.

But then... Who am I trying to fool here??? Let's be honest, the only ones who play stuff like Giga Wing and have fun with it are shmuppers and sympathizers. We all know that what drives us is the search for a higher score, the rush, the excitement of weaving though crazy difficult bullet curtains! 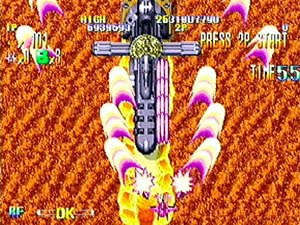 There are 4 available ships/pilots in Giga Wing, all of them with their own reasons for destroying an evil medallion. The war takes place against a huge horde of enemy craft that fires relentlessly and lays down all sorts of bullet waves against you, in an explosion mayhem that not rarely overloads the senses. The player counts on his/her own firepower, on the obligatory force bombs and also on the Reflect Force (henceforth referred as RF), a shield that's activated by holding the fire button - it reflects all bullets that touch it and renders the ship invincible while it lasts. RF triggering isn't instantaneous (there's a slight delay), and once deployed the RF bar has to be refilled before it is again available for use. That's the basics of what the player can do, and lots of enjoyment can be had just by shooting, reflecting and bombing. The real fun, however, starts when you get a hold of the scoring system and realize how to get even more points than what the inflated display already shows you.

All flying enemies release medals, and all reflected bullets that hit something are also converted into medals. These medals vary in size and value, and collecting them will increase a multiplier that's used to calculate everything from the bulky end of stage bonus to the points given by a measly popcorn airplane. Every stage has a multiplier counter that starts from zero and continuously adds to the overall multiplier. This stage multiplier is reset after each boss battle or when the player dies. The higher the multiplier the higher the score, so there you have the motivation for collecting/extracting the highest possible number of medals from enemies and bullets. It's such an addictive mechanic that soon I found myself to be measuring my performance not by score, but by the score multiplier alone.

The main weapon can be powered up 3 times with the bouncing P item, and extra bombs are also granted in specific points in the game. Under regular circumstances, there are no extra lives at all. The only possible 1UP can be acquired by destroying all outer orbs and then the red central orb in a certain part of stage 4 - only if you are in your last life. Otherwise, this strategy generates a series of huge medals worth 200 multiplier points each. This is one of the most important secrets (from many) lying around in the game, and I must say I didn't bother discovering the majority of them. I know there's rank in Giga Wing but I don't perceive it that much, especially when comparing it to other bullet hell shmups. There are theories saying that dying in the beginning of the game makes it easier later on, but I can't imagine myself doing that when I'm able to clear the game without suiciding.

From all available characters, my favorite one is Ruby. She flies the fastest and strongest ship, and her weapon is great to collect medals. Weak and slow Sinnosuke is worthless; Isha is cool, but her homing missiles confuse me a lot; Stuck's ship is also very strong, but I don't like the fact that his bomb pods move whenever you stop shooting. The order of the first 3 stages is changed depending on the selected character, and co-op play results in a different storyline for the character duo. Exclusive to this port, there's also a 5th ship that's unlocked after beating the 7th stage - it's the fastest and strongest of all, and its pilot is Sinnosuke. All voice acting during intermission dialogues was removed in the US release, but can be found in the Japanese version. Not that it matters much, but at least Giga Wing didn't get the kind of treatment Shikigami No Shiro II received when it was released in the west as Castle Shikigami 2 for the PS2.

Graphics in Giga Wing are pure 2D bliss, with great settings soaked with bullets of all colors. Though it doesn't push any of the well known 2D design boundaries, it's one of those titles that proves how much of a processing powerhouse the Dreamcast is. Slowdown only sets in during brief spells of overwhelming screen bullet count, and do not affect gameplay at all. While the music isn't outstanding, some tunes are really cool and stick like glue after just a short listening (volcano stage, end of stage bonus). One excelent extra in the Dreamcast port is the addition of a Score Attack mode for isolated stages. They are unlocked as soon as the levels are reached in Arcade mode but, more than its original purpose, Score Attack actually served me as a welcome training aid. An art gallery and a brief tutorial are also included in the disc, which is, as far as I can tell, one of the noisiest discs I've ever played in my life. While this does not happen to any other Dreamcast game I own, the console seems to be scratching all its innards when reading Giga Wing. So far it's been harmless to the hardware, but it's sort of scary when you boot it up for the first time. 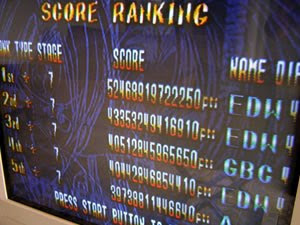