I'm sure a lot of people out there share the same opinion I have towards the Space Invaders series. Taito created the first game in 1978, and it soon "invaded" every single gaming platform that came along ever since, eventually saturating the market with endless ports or variations that didn't actually add anything noteworthy to the basic formula (with a few exceptions only known by hardcore players). Of course I do acknowledge the importance it had to our beloved genre, but at the same time I'm obliged to confess that the vast majority of the Space Invaders titles represent nothing more to me than pure boredom. Imagine our surprise, mine and of those who also find the series boring, when we laid our eyes on one of the available versions of Space Invaders Extreme.

Released to celebrate the 30th anniversary of the original game, Space Invaders Extreme simply materializes a lot of what I believe should've been done years ago with the series. It's a major departure from the slow moving aliens from before, but it also preserves the core aspects of the gameplay that made so many people happy during the 80s. There lies the secret Taito unleashed on both casual and hardcore players alike, since this awesome title can be enjoyed by both factions to great extent. It's a visual and aural feast for the senses, a massive overhaul with a huge potential to please everybody. 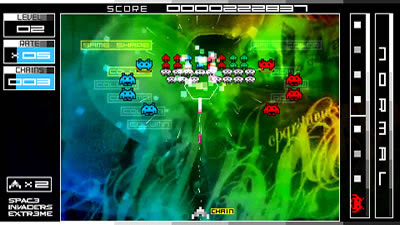 On the outside, the game plays just like a regular Space Invaders chapter. With the exception of the barriers, which are totally absent in this version, all well-known invader sprites are there hanging above your lonely ship. The first notable difference, besides the pumping music in synch with your shots (much like in Rez), are the crazy psychedelic backgrounds. Then you have the aggressive use of colors. A few invader waves into the game and you get intermission screens such as "bonus", "roulette" or "boss", this last one followed by a huge invader that must be hit on a weak spot. Oh yes, you have just found out Space Invaders Extreme has stages, five to be exact. And starting on the 3rd stage the game branches much like in Darius, depending on how good your performance is.

And while the game can be played for fun only, its intrincacies regarding scoring are what elevate it above its predecessors. Each division in the HUD means something and since covering them all would take too long, let me just point out the most important things I learned in this brief playing period:
All other quirks in Space Invaders Extreme are not so hard to grasp. There are people who complain about all the stuff going on in the backgrounds, but it didn't bother me at all. Fortunately for the unhappy ones, background brightness can be set to zero.

At the end of a stage the player's performance is given a rank note. After stage 2, a rank of at least B will allow you to choose a different path for the 3rd stage, 3A or 3B. All alternate routes from here on are considerably harder, so mastering the A routes first should sound as good recommendation. Every stage that's completed in the main game (Arcade mode) is unlocked in Stage mode for isolated plays. Beating Arcade mode will unlock Extra mode, which is in fact a much harder version of the game. Continuing sends you back to the start of a stage but preserves the score - not a manly way towards a better achievement at all...

The default high score is awkwardly high, and it's perfectly normal to beat the game and still not reach the 5.000.000 top score. My best run through the upper route resulted in the following number: 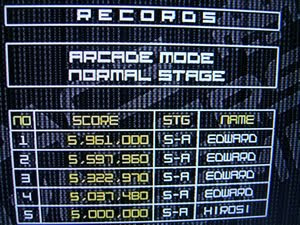