This one had been lying around for a while and I wanted to play it to finally get a notion of what everybody calls an euroshmup - even though my copy is the Japanese, not the European one. X2 - No Relief is always brought up in any conversation related to this dreaded term, which is in most cases used with a negative connotation towards the game labeled by it. When released in the Japanese market, X2 received a few trimmings in order to make it less "euroshmuppy", and therefore the Japanese version is considered to be the easier and most accessible one. Trimmings aside, I assume the core experience still remains the same.

X2 is the sequel to a game called Project-X, released for the Amiga, but they seem to bear no resemblance with each other besides being scrolling shooters. The graphics in the first stage of the Playstation game immediately reminded me of Einhänder, though they lack the polish Squaresoft's shmup masterpiece is well known for. This impression vanishes as X2 progresses, being replaced by the more obvious similarities in music, for electronica/techno is the word in X2's score. I like some of the tunes, and I wouldn't mind getting the soundtrack CD for my collection (assuming it exists, of course). 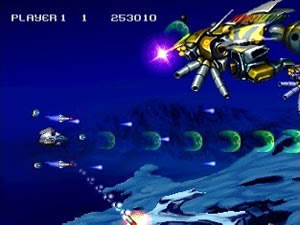 Fighting an alien invasion is the character's main mission, as shown in the rather lengthy animated intro. It's possible to choose between 3 available ships with different characteristics for speed and power, but all of them will have to go through lots of power-ups in order to achieve the required firepower for each stage. Power-ups are released by certain enemies and come in 4 cycling distinct icons: main weapon, missiles, side shots and shield/energy/speed. Now this will please players who complain about losing their power-ups when dying: in the Japanese version of X2 you never - EVER - lose your power-ups. Even the speed remains the same when you're respawned. There's also an energy bar for each life, and on top of that this bar gets replenished whenever a new stage starts.

Every power-up needs to be obtained a few times (2 or 3) in order to reach its full power. Getting a maxed out power-up will cause a minor explosion that damages enemies nearby, in a smaller version of the bomb attack. By the way, bombs can only be stocked up to 3. You always get extra bombs when defeating bosses, so there's no need to refrain from bombing during boss fights. Up to 4 Gradius-like small options will also be integrated into the ship's firepower, and their formation can be selected at the press of a button.

There are some interesting aspects in X2's gameplay. One of them is how the different power-ups are distributed. Newly acquired main weapons are never lost and can be selected at any time. However, just like missile and side shot upgrades, you don't get them all up front. They are all scattered throughout the game. The beam weapon, for instance, only appears in the 4th stage, as well as the icon for auxiliary side shots. The final weapon (twin) is only released during the 6th stage, and only then you can use the shoulder buttons in the controller to adjust its opening angle. Instead of being depleted by a certain number of hits, the shield has a limited lifespan, during which you can ram into anything in the screen without losing energy. Getting the shield icon requires special attention though. The cycling order of the icon is shield/speed-up/energy/speed-down, and taking the wrong one in the wrong place can be disastrous to an otherwise mighty hitless run. To sum it all up, gameplay in X2 relates strongly to brute force: simply power up the ship as fast as you can. An unwise selection of power-ups is the main reason for the loss of a credit. Being hasty and careless equals failure, while patience and attention often leads to a pleasant and massive destruction campaign. All of this contributes to make X2 a mildly strategy-laden ride, one that will turn the ship into an impressive powerhouse by the time the game reaches its last stages.

X2 - No Relief is a bit long. There are 10 levels in it, but luckily they are varied enough to avoid boredom. Scrolling alternates between horizontal and vertical during gameplay, which is a cool touch I'd love to see more frequently in the shoot'em up world. There's an end of stage bonus, but there are no special scoring techniques whatsoever. Last but not least, it's important to mention that the game unfolds without a single ounce of slowdown, even in co-op play (as seen in the attract mode).

Most of the aspects of the euroshmup definition are strictly subjective, such as a presumed mediocre level design, unbalanced difficulty and complicated controls. The only objective checks I see against X2 - No Relief are the presence of a health bar and the granting of stage passwords (unique ones, no complete saving, starts with a pre-defined power level). Those who use the term extensively say the health bar is used to mask bad level design, but I don't think it applies here. Maybe to a few sections, but the overall result is decent enough. Truth is that bad design can be found anywhere. It doesn't matter where a game comes from, fun and frustration can be had with all sorts of different styles and settings.

The high score below was achieved on NORMAL difficulty. I also did it on HARD (enemies get more resilient and you take more damage when hit), but with a lower score. 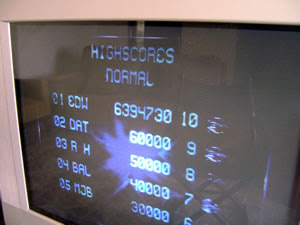 Want to know a curious thing about this game? It was slated for a Sega Saturn release, but we all know it never came to be.
Posted by Edward at 6:57 PM