As decent a port as Raiden Trad is, the coolest thing about the game for me is its name. Back when it came out I had some access to arcade machines but I didn't have a deeper understanding about them or anything related, and it would take years for me to find out the name of the series was just plain Raiden. So Raiden Trad always felt like the definitive title to me, and to this day it rings better in my ears than the original, somewhat generic Raiden.

One of the several conversions that came out during the 90s, Raiden Trad for the Mega Drive is sadly also one of the most underrated shooters on the console (at least that's how I perceive the general feeling towards the game). I believe this has something to do with the old-style graphics, the well known slow speed of the ship and the checkpoint-based system, which is the main gameplay change from the arcade original. The resulting high level of challenge is probably to blame for turning off casual players from digging deeper into what the game has to offer. For years I've been wanting to finally beat it but at the same time I dreaded the checkpoints, a fear originated from past experiences and from playing the game on the EASY difficulty, the default setting. Yeah, I know… I was young, I was uninformed. 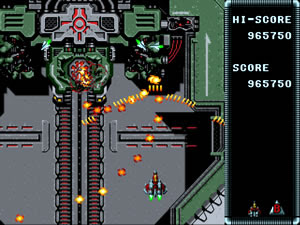 Hard choice: weaving through the pattern or using the last bomb in stock?

In a nutshell, the gameplay revolves around getting power-ups for two types of weapons: red (vulcan) and blue (laser). They're not selectable, and can only be changed when the next power-up appears. Then there are the missiles: straight (M) and homing (H). And then there are the bombs, which influence the end of stage bonus in conjunction with the number of medals collected. This is exactly the same basic structure found in the arcade version, which I explained in full detail when I wrote about the Playstation port. Raiden Trad on the Mega Drive has only minor, insignificant gameplay differences, such as the value you get when uncovering and grabbing the miclus (5.000 instead of 3.000 points) and an assumed toning down of the laser's and straight missiles' power. Because it's a checkpoint shooter, dying during boss fights will reset the number of flags/medals collected, thus considerably reducing the end of stage bonus. For some people the lack of a 2-player simultaneous mode might be a serious drawback, not for me though.

As for other aspects of the game, there’s no denying Raiden Trad bears a remarkable level of faithfulness to the arcade version. I noticed only very few (maybe 2 or 3) medium-sized enemies are missing, while everything is graphically pretty close to the original, down to enemy placement and boss patterns (some of them are actually tougher). The soundtrack takes the biggest hit but still manages to convey what the game is all about musically. Sound effects are sort of a mixed bag, yet I'm really fond of those slightly muffled explosions you hear when the missiles hit something. The screen gets a little bit jerky when a fully powered vulcan weapon is tearing everything apart, but in general the scrolling is fine and fluid.

Reminiscent of early Toaplan vertical shooters, it's important to mention that this game shares the same reputation they have for being very difficult. Dying in later stages with no fairy recover in stock makes it almost impossible to go on, even if it resets rank - which makes things nasty if you play well enough and don't die. One of the features that makes the Mega Drive port a bit special is the extra stage included by Micronet after the end credits roll. This is hands down one of the hardest challenges ever posed to a gamer in shmup history. Unless you beat the last boss (stage 8) while preserving all power-ups there's no chance you might ever be able to see the end of this extra 9th stage. In case you're wondering how it plays you can check this video, recorded in the HARD difficulty with the aid of save states.

I don’t usually care to write about game covers, but in the case of Raiden Trad I feel forced to say that the Genesis version is just hideous. I’m very proud of my Tectoy variant, just check out how awesome it is. Notice how it sort of turns the Japanese art upside down. Beautiful!

Here's my 1CC high score for Raiden Trad on NORMAL (didn't even get past those four starting enemies during special stage 9): 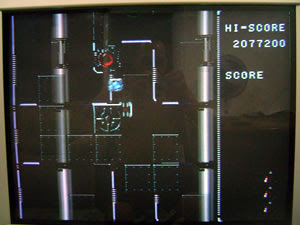