There's no doubt that today's shmup scene belongs to bullet hell shooters. If you think about it, the genre is currently sustained and supported mostly by one developer alone, and that developer is Cave. Cave was one of the companies created from the ashes of the bankruptcy from Toaplan, another pivotal company that prevailed in the arcade scene of the golden era of shmups, and the connection between the two is mainly related to the inevitable question that lots of people (shmuppers or not) sooner or later come up with: where and when was bullet hell born? If you ask the most knowledgeable about it, there's a great chance they will mention Batsugun, the last shmup developed by the once great Toaplan.

Batsugun is a fast, frantic and straight-to-the-point vertical shooter that saw the light of day in 1993 and was ported to the Japanese Sega Saturn three years later. It's at the same time a testament to the characteristic style of shooters from the early 90s and a step forward in a new direction, which is the main reason why it is regarded by some as the first bullet hell in shmup history. Though this statement is open to debate, I do comply with the fact that Batsugun is the mold which would later be used as main inspiration to DonPachi, the first title in Cave's most prestigious series to date (not forgetting that Grind Stormer also had a strong influence over the style of DonPachi). As such and being obviously less famous that its successor, Batsugun comes highly recommended for everyone who's into Cave's portfolio and appreciates solid old school blasting fun, with nice crisp graphics and a pleasing soundtrack to boot. 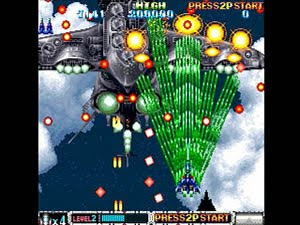 Jeeno pilots the type A ship against 2nd boss Madzella

This game is well known for its huge, astounding weapons. Initially you won't notice that, since they are upgraded in a very original fashion. Besides collecting power-ups, the ship "evolves" every time the experience bar gets filled up by consistently destroying enemies (RPG-like my ass!). This means the more enemies you kill the faster you evolve. This evolution is signalled by an explosion, a big LEVEL UP message and a considerable change in the weapon's graphics. The ship can evolve three times and power up five times within each experience level, with all surplus power-up icons being converted into points (starting with 1.000 and peaking with 10.000 points each). When in experience level 3, further fillings of the experience bar result in extra bombs, which can be stocked up to 7.

Of all three ships to choose from my favorite is type B, whose pilot can be Beltiana (player 1) or Alteeno (player 2). This ship is the strongest and best one all around, period. The starting level for it is just a continuous straightforward lightning stream, but in the maximum level it fires an additional powerful dual round shot and a secondary homing flux that's really useful in later stages. It's mostly a concentrated weapon when compared to types A and C, which behave completely different and have a spread-style to them. From what I've noticed all ships share the same speed, but types A and C are overall weaker. However, types A and C can also be devastating when used in point-blank distance. No matter which one you choose, they're all a sight to behold when working in full power, since all of them cover a great area of the screen without ever causing any slowdown, be it playing solo or in co-op (tip: the shoulder buttons toggle the lower hud display, which impairs ship visibility if you remain in the bottom of the screen).

Adding to the simple gameplay mechanics, an easy scoring system is also in place to boost the fun factor. Certain enemies release V-shaped golden medals, which in turn award bonus points when completing a stage. You have to be careful not to die during boss battles, because that will result in no bonus at all - only the medals collected since the last death are accounted for. In certain occasions ground pigs will be revealed, and hovering over them will grant extra points. There are other intricate ways to score higher, mainly involving bombing + boss milking, but these are extremely risky or difficult to pull off (check the Shmups Forum strategy thread if you want to know more about them). With just a single extend given with one million points, the rest of the gameplay consists of getting used to the rank progression if you don't die and the sudden difficulty ramp that starts in stage 3. I was sort of scared by how fast enemy attacks become later on, but I assure everybody that with some practice Batsugun can be properly beaten by anyone. The game is great fun to play, and after a while it's easy to notice that it does carry some of the traits that would eventually be incorporated by bullet hell shooters. It isn't as overly difficult as it seems, and I think several previous Toaplan games are much more demanding.

Included in the Saturn release is also an optional arranged soundtrack and Batsugun Special Version, the precursor to all Arrange Modes you see in today's shooters. The main differences from the regular game are: different colors, reduced initial difficulty, smaller hitbox, total of five asymmetrical loops (15 stages), suicide bullets starting in the 2nd loop, more continues, different behavior for uncovered pigs, different bombs and a 1-hit shield granted when levelling up. This lengthy mode should definitely please those who're game for a considerably harder and longer shooting challenge.

My initial aim was to beat the main game, so here's the final result I got on NORMAL: 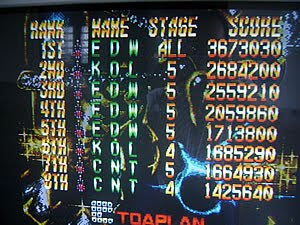