Every shmup fan who's got a modern video game console knows that the Playstation 3 is absolutely no source of new material when it comes down to retail releases. After all, as of today it has none. However, its downloadable shmup catalog is steadily moving away from the void, led by one of the first games in this era to offer full-fledged 2D HD sidescrolling shooting action: Söldner-X - Himmelsstürmer. At one point in this blog I mentioned this game was the reason why I decided to finally take the plunge into the world of downloadable software. For a while I had only sparse runs that would always end on the 2nd boss, but a couple of weeks ago I decided to finally go the whole way to save my endangered planet from the bad guys because, you know, the sequel Söldner-X 2 - Final Prototype is right out the door (it’s in fact being released on the very same day this piece of writing is being published!).

Visually, Söldner-X is one of the finest shmups out there, there's no doubt about it. Seeing this game in motion is a thing of beauty, and upon taking a glance at a single video I doubt any real shmupper would resist trying it. It takes great advantage of the HD capabilities of the PS3, boasting some jaw-dropping moments and cluttering the screen with so much stuff it's sometimes hard to focus on all possible threats to the mercenary spaceship that departs with the impossible mission to save the earth. For those who’re into it, this mission is narrated in a very cool fashion from start to finish. I couldn't care less about it, in a game that's this enticing my only interest was always to dive right in and blow things up.

One of the aspects that struck me when I started playing was the cheesiness of the game’s narrator, who yells things like “you fight like a maniac, keep it up!”. It’s awkward and funny, but the cheese factor eventually fades as you get deeper and deeper in the heat of the battle. Sound effects are great and definitely enhance the animation (explosions!), whereas the music is pure bliss, definitely one of the best soundtracks to grace the genre in a long, long time. 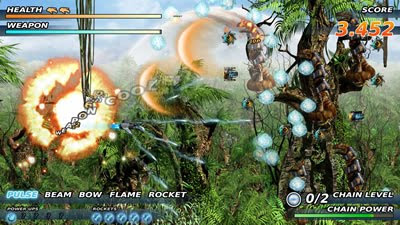 The game does feel a bit complicated and cluttered at first sight. It takes more plays than usual to learn how to deal with the five main weapons. Pulse and Beam are always available from the start, while the three other weapons (Bow, Flame and Rocket) are acquired with icons and have limited ammo, which can be replenished by new icons or by the "weapon cooler" power-up (except for the rockets). This "weapon cooler" is also used to refill the Pulse and Beam weapons, since they can "overheat" and automatically provoke the switch to the next one. This means that whenever one of them is used for too long and the weapon bar is depleted, the next available weapon is automatically activated so the overheated one can cool down. All weapons are very distinct from one another, and most of the challenge in the game relies on finding out which one is better for each situation, or for the most efficient chaining strategy. And contrary to popular beginner's belief, the Beam weapon (the lightning cloud) is very, very useful in certain parts of the game.

Chaining is important not only for scoring, but also for getting new power-up items. The good thing is that the chaining technique is very simple: (1) the chain bar gets filled by destroying enemies; (2) when it gets green, switch the weapon; (3) repeat. Power-up items are released randomly by selected enemies, but items triggered by chaining can be foreseen on the left side of the chain bar. And there are so many it might take quite a bit to get used to all of them: multi shot (the basic item to increase weapon spread range), fast shot, shield (temporary), armour breaker, speed-up, shock wave (smart bomb, only one at a time), weapon cooler, weapon protection (if you have it you don't lose weapons/power-ups when you die), option (the best of them all), extra points, chain level up, enemy freeze, score multipliers, health, 1UP, speed-down and death bombs (don’t get these!). It’s an overwhelming array of items, and the only way to know them all is to play the game over and over again. Since there's no rank, all initial efforts should be directed towards not getting hit and not dying, or at least grabbing a new weapon protection item right after dying. Being stripped down to the basic ship is really not fun in later stages.

After I grasped the basics of the gameplay I was able to admire the graphics and keep my focus on the stage layout. Doing this was important not only because the graphics are beautiful, but also because it was critical for survival during the 2nd stage. That's where things start getting nasty, with lots of walls, narrow passages, exploding mines, foreground objects and screen acceleration. Enemies and scenery sort of blend into each other, creating a chaos maze that's very criticized by lazy, picky players (strangely enough, some of them being the same people who idolize stuff like Battle Garegga). To make things even more taxing, the 2nd boss was extremely frustrating during my initial runs. That beast just wouldn't die! It took me a little while to know he can only be harmed in the neck by the spikes from the ceiling, and a great further deal of observation to learn how to make those spikes fall at the right moment.

Scoring well in this game revolves around killing as many enemies as possible and finishing bosses fast. Stage performance is ranked from S (ultimate) to G (lousy). Everybody should pay close attention to the rockets fired by the mechas, which fly through walls and are very hard to see. Brute force is key to survival in places like the asteroid belt, so try not to miss the armour breaker, rapid shot and option items to obtain maximum firepower. For the mine field during the 4th stage, the only advice I can give is practice. Then practice again. And then practice a little bit more.

A full Söldner-X run lasts way over an hour, which is nothing less than an epic shmup undertaking. The game carries some of the expected online features, such as worldwide scoreboards and trophies/achievements, but no online co-op. What really bugged me here is the fact that in order to have access to the 5th and last stage you must collect 4 of 5 secret keys in all previous levels. These keys are always hidden, sometimes in places where it's impossible not to die getting them, so prepare to waste a few credits in any difficulty setting of your choice. Extra continues are unlocked with time, but credit feeding is totally discouraged by the punishing difficulty of later stages. Speaking of which, the only difference from a difficulty setting to the other is the amount of damage you take when hit – keep in mind you have to beat the current harder setting to unlock even harder ones. Beaten stages can be played separately for practice, while the main game can be played with a tutorial mode activated.

The only glaring flaw I see in this title is how unbalanced it feels when you decide to play strictly for score, since luck plays a huge part in how power-up items are obtained. There’s a great difference, for instance, between entering the asteroid belt with the armour breaker/rapid shot/option winning combo and facing the barrage without it. However, since Söldner-X is such a rewarding challenge, the fun factor will always be there regardless.

My 1CC high score on NORMAL is the one highlighted here: 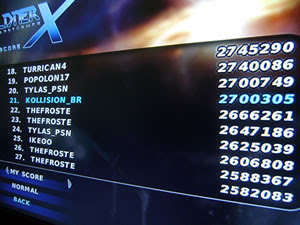 And below is my current global ranking in my Söldner-X profile (be sure to check their webpage for hints and other great material). Future improvements, if any, might appear directly is this stylish little box.