The first Zero Gunner was a tilted arcade vertical shooter, much like Silpheed, and did not see any release for a home console. Zero Gunner 2, the sequel, was promptly published for the Japanese Dreamcast right after hitting the arcades. It was a lot different from the first one and a great improvement in many ways, and together with Cannon Spike and Dragon Blaze it certainly pointed to a bright creative future for developer Psikyo. Unfortunately, Psikyo folded in 2002 and fell under the wings of X-nauts, ceasing to take part in the dwindling shmup scene. It's debatable if it can indeed be considered the best one, but in my opinion Zero Gunner 2 remains at least as the most enjoyable and fun shmup Psikyo ever developed.

Reasons for the above statement are many. What we have here is a very polished and cool-looking title that makes great use of the best known Psikyo concepts while offering a refreshing take on the shooter formula. The four initial stages are always shuffled, so you rarely follow the same path in consecutive credits. On top of that, the implemented rank system will demand that you learn how to play all of these stages in their various dynamic difficulties. Of course this is absolutely no news for Psikyo-initiated shmuppers. Regardless of any previous familiarity with their work, what sets Zero Gunner 2 apart from other Psikyo outings, or any contemporary shooters for that matter, is its unique arena gameplay. Because, you all know, there aren't many scrolling arena shooters out there. 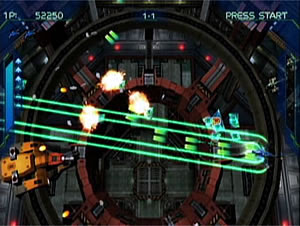 The Comanche helicopter in action against a deadly rotating turret

There are three helicopters to choose from after hitting start. They all reach maximum power after three power-ups collected, and the main difference in their weaponry is side reach. In order to turn the chopper around it's necessary to press an auxiliary button so that a crosshair will appear for the player to use it as a fixed rotating point. It may sound tricky just by reading this, but it's actually very functional and effective.

What makes each chopper unique is definitely its special attack. The Apache releases an extremely powerful short-range set of homing blades, the Comanche deploys a fixed minion that keeps shooting for a short while and the Hokum model (my favorite) enables a series of options that follow it around and add greatly to the chopper's firepower. Stocking special attacks (6 maximum) is done by collecting floating diamonds left by killed enemies. Doing this effectively is one of the secrets to win the game, and that's why letting go of the firing button sometimes is important, since this will make all diamonds/power-ups home in directly on the helicopter instead of straying away. Most importantly, diamonds also add to the score (the only extra life in the game comes with 600.000 points).

I can imagine how much of a breath of freah air Zero Gunner 2 was during the time of its release. And the fact that it retained Psikyo's style while at the same time being so much fun is remarkable (not that Psikyo games aren't fun, it's just that they're dry hard and mostly intimidating whenever you aim for the 1CC). With the exception of the music, it's really hard to be picky with this game: there's a great intro, stage design is varied and never repetitive, bosses are mostly huge Transformer-like beasts that evolve from military vehicles and the difficulty curve is much more forgiving than the average Psikyo game. You could even say the first stages are kind of relaxing, be it flying high above over a metropolis or approaching a marine base. Enemy design/placement is so well done that you don't even notice that all background graphics during the cloud stage are... just plain clouds. In other words, this is nothing more than simplicity geared towards top notch results. Another example of this are the brief animated cut scenes that connect the main sections in a stage: they can be instantly skipped with absolutely no interruption or delay (developers take note: this is the correct way to handle cut scenes in shmups). Simply put, there are no loading times in Zero Gunner 2.

This last couple of weeks wasn't the first time I played this game. I had beaten it in the default difficulty (4 - Normal) a while ago, but recently I found out the correct setting should be 5 (Arcade). Going just one step up in this setting gauge wasn't as easy as I had envisioned though. Bullets get a bit faster, but the trickiest aspect of all is that the safe point blank distance gets severely reduced in later stages if you don't die. I sincerely considered - and even find it feasible if one's aiming for a 1st-loop clear only - to suicide at the beginning of the 6th stage. This kept things much more manageable for me to reach the last boss without dying again, because dying in the middle of the 6th stage leaves the chopper with a low stock of special attacks. Besides the change in the color palette and the increased difficulty, the second loop also comes with suicide bullets for every single destroyed enemy, with no point blank safe distance at all.

Credit feeders won't be able to "beat" the game right away, but it does add extra credits with repeated plays. As for the extras, I'm really fond of the little ones provided by the Dreamcast port. First of all, you're allowed to record replays. Secondly, reaching the end of the 1st loop will unlock a replay with a complete run for both loops. Yay!

So here's my high score in Arcade difficulty (5), playing with the Hokum until stage 2-1: 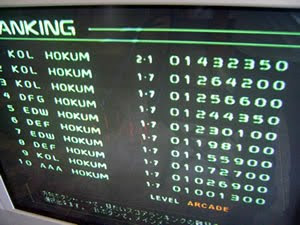