On the verge of finally entering the 16-bit video game scene, Nintendo surely had a lot going for it when releasing the SNES back in 1991. Several companies were more than keen on investing in this new and groundbreaking console, and Taito was surely one of them. After all, the SNES was their choice to run the first exclusive Darius game developed for a home console. Not only that, this was the first console Darius that allowed two people to play simultaneously, just like in the famous arcade counterparts. I remember fondly of images and footage of Darius Twin being advertised side by side with heavyweights such as Super Mario World and F-Zero, and while I wasn't a shmup nut back then I know my dormant shmupper self was definitely smiling at the possibility of playing such a cool looking game.

It's been nearly 20 years now, and finally getting the chance to experience Darius Twin to the fullest is something I cherished to a great extent (for whatever reasons I hadn't done it yet). As such, I was more than prepared to be exposed to new doses of space fish blasting, exciting pursuits for that beautiful golden shield and more epic showdowns against massive marine creatures. With the exception of this last part - wimpy bosses all around :( - I believe I got what I hungered for. As seen in the game's attract mode, many years passed after the last battle had ended, and planet Darius is once again attacked by Belser's evil forces. What's left but to draft all Silver Hawks in another mission to bring peace back to the galaxy? 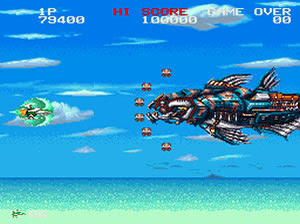 "Finally I am the main boss!", roars Killer Hijia as he approaches the Silver Hawk

Darius Twin is a special chapter in the series for various reasons other than what I just mentioned above. Let's start with the power-up system. It bears a close resemblance to the one adopted in Darius II, in that you collect single power-ups only. All power-ups are carried by waves of cubes — those same pesky ones that appeared if you took too long to beat the bosses in previous games — and come in different colors. The red one powers up the main shot, the green one powers up the bomb/laser (bombs develop into lasers) and the blue one powers up the shield (classic green → silver → yellow). There are extra icons for 1UPs, instantaneous smart bombs and a special one that's responsible for "switching" the style of the main weapon from the energy beam to the wave shot and vice-versa. It only appears twice throughout the whole game, but it's advisable not to get the 2nd one because the wave shot is a lot more powerful than the starting shot type.

Now for the most unexpected of all changes: with the obvious exception of the shield, you don't lose power-ups when dying! Isn't that great for those people who always complain about being stripped down to nothing when they die? Indeed, great it is! At least until you get to the last stage, where you'll be swarmed by lots of mid-bosses/captains who will put your shield to the test and crush you as if you were an insect. You can only get two extra lives with the 1UP icons, so your best chance to survive is getting there with all four spare lives, a powerful shield and exquisitely developed/trained reflexes.

Scoring in Darius Twin is very straightforward because, unlike previous games, there isn't any bonus for killing complete enemy waves. I read somewhere about the fact that the design in this chapter is mostly comprised of leftovers from Darius and Darius II. That, my friends, is correct. With a few expections, every stage is a somewhat more colorful version of previously seen backgrounds. At least the enemies are more diverse, but they strangely don't fire that much at the player. Actually, bullet count in this game is extremely low, and all most dangerous enemies will prefer to ram into you or blindly attack with bulky fireballs. The hitbox suffers a bit from the "expanded boundary syndrome", so it's necessary to get used to that awkward feeling that the enemy wasn't close enough to kill you during that nasty collision. Hardcore Darius geeks might also frown upon the reduced number of stages, with only one final level to play as opposed to the multiple final battles that were possible in previous entries. On the other hand, the music is quite faithful to the well-known weird quality from Taito's Zuntata development team.

Maybe as a compensation for the letdown of having only one final stage, Taito included five different endings in the game. Unfortunately, the way to achieve any ending beyond the regular one is quite lame, since you must remain restricted to one path only (ACDFHKL). The endings differ according to how many lives you lose, with a special version for timing out against final boss Super Alloy Lantern. He is, by the way, one of the wimpiest final bosses ever. In fact, almost all bosses are revamped versions of pre-existent Darius bosses. Alloy Lantern's sidekick Killer Hijia, for instance, was promoted to boss of area A, while Great Thing resurfaces with an updated movement pattern as Hyper Great Thing in stage L.

This game surely doesn't set any Darius fan's world on fire, much less the average gamer's. Nevertheless it does remain true to the atmosphere of the whole series, representing a fine console link between the Darius games of old and the more demanding Darius Gaiden. As a bonus, this is the first instance where you're able to play with a green Silver Hawk (single player mode only, you can only play with the classic red/blue ships in co-op). The good news, at least for me, is that the green ship is back again in Super Nova/Darius Force, the next chapter of the series and also on the SNES. Yeah, Taito did show some love to Nintendo's 16-bit console, didn't they? 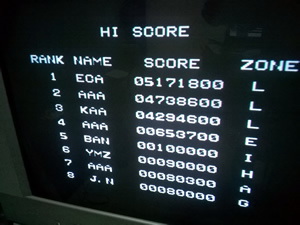