Undoubtedly, Zero Wing is much more famous in the Mega Drive than in any other existing format, including the original arcade game. The only other version of one of the finest Toaplan shooters is this one for the PC Engine CD, and while it does not live up to the standard established by the earlier Mega Drive port it's still a decent shmup all around. Some people might even consider it superior due to some juicy extras thrown in with the package - which is not my case.

No, there's no "what you say" here. The famous Engrish intro is exclusive to the PAL Mega Drive version. The PCE CD port has lots of cut scenes that try to concoct a story for the game, for which I have absolutely no clue at all as to what it's supposed to mean. These cut scenes are what you'd expect from a 16-bit CD based system, but I really wish there was some accompanying music to them. They all go by with only dialogues and absolute silence, so boredom certainly ensues for those who can't understand a word of Japanese. Board your "Zig" spaceship and cruise through 10 stages of old school shooting fun! Wait... 10? Yes, this port has two extra stages included right in the middle and at the end of the game. The first new level comes after Aquese (4th) and Submarine Tunnel (5th, now 6th) and is called Deeva. It seems to be a set of background/enemy leftovers from both Zero Wing and Hellfire, Toaplan's contemporary flagship horis. It takes place in a scarlet rocky planet, and towards the end it serves as a preamble to the more claustrophobic Barricade Zone (now displaced to the 7th stage). The last level is called Vacura, and consists of a single fight against a new final boss - maybe an attempt at giving the game a proper climax since the original final boss always escapes in his pod if you're not bold enough to take him down.

Basics of the gameplay remain the same. Destroy carriers to release power-ups. Despite increasing the level of the vulcan weapon, the first red power-up spawns two satellites above and below the ship. The blue icon changes the weapon to a laser beam, and the green icon activates the homing weapon. Almost all enemies can be captured, used as a 1-hit shield and released forward with the tractor beam, a feature that's very useful during crowded sections. It's like a simplified version of the force from the R-Type series, with the difference that it cannot be latched to the back of the ship. At times a special bomb will appear: keeping it attached to the ship works as a more powerful shield, which in contact with any enemy (or after absorbing too many shots) will go off in a great explosion

The last icon available is the speed-up. Getting the same weapon power-up three times will max out the ship's power, and every subsequent icon of the same color will be worth 5.000 points. A new life is awarded for every 100.000 points, and I did not see any 1UP or the much famed super-ultra-rare-power-up from the arcade/MD versions.

Compared to the Mega Drive port, this version is just slightly inferior. Graphics seem sharper, but they lack lots of the detail that's present in the MD cartridge, let alone almost all of the original parallax. The PCE game is overall easier, except for the 8th stage boss - if you die there you might as well reset the game, because his roaming spheres cannot be thrown with the tractor beam (hint: carry a bomb with you). Finally, the most unexpected difference between versions is the music, which one would assume to be superior in the CD version. Something very wrong must have happened though, because with the exception of the song for Aquese (stage 4) all BGMs sound far better on the Mega Drive. All compositions are still catchy because they're just genius, but I just can't believe how Naxat Soft was able to trash the arrangement for the BGM on the Submarine Tunnel stage. It reminds me of 8-bit music, honestly! Moreover, sound effects are too loud and make listening to the music a bit difficult while playing.

On a final note, Zero Wing for the PCE CD does not loop. The high score display has a minor malfunction where it will not register the score you achieve when fighting the last boss (it's no big numbers anyway, but I figured it would be interesting to mention). Scoring higher might depend on exploiting checkpoints and the many extra lives you can achieve, but I didn't venture into this kind of strategy. For now, my new high score for this game is a rough 11% improvement over the last one I had. 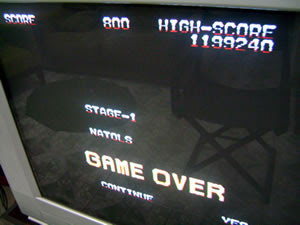 Now would any brave developer be up to the task of making Zero Wing 2? If only dreams came true...
Posted by Edward at 2:02 AM