Mamoru-kun wa Norowarete Shimatta! is the complete name of this Japanese release, and translates to something like "Mamoru-kun is cursed!". Given its name, nobody should take the game for granted as far as its Japanese quirkiness goes. This is a very, very weird shmup, one that doesn't really abide by the rules we all know and love but still manages to hedge itself deep into the genre. The structure isn't conventional, the scoring system either, and the leap of faith it demands to be appreciated is huge. I couldn't really connect to it. I played it on and off for weeks, never feeling the urge for that extra credit and never willing to actively improve my score.

Something isn't quite right when the strongest quality in a shmup lies in the character design. Quoted from the game description by the fellows at NCSX: "Mamoru-kun follows the adventures of a lad named Mamoru Tomoka, who's been involved in a car accident. After he's hit by a speeding vehicle, his soul is immediately spirited to the underworld by a priestess who calls herself Fululu Jigokudani. As the story goes, the gateway to the underworld is under attack and the spirits who reside there have been cursed by malevolent forces. Since Fululu can't fight the oppression by herself, she has summoned Mamoru and three other heroes to fight on the underworld's behalf."

The above story is somehow conveyed by a cool sequence from the game's attract mode, and immediately hints at a cute'em up aesthetic soaked in vibrant colors and marred (for us Westerners) by lots of Japanese text. That's really odd considering all menus and options are displayed in English. 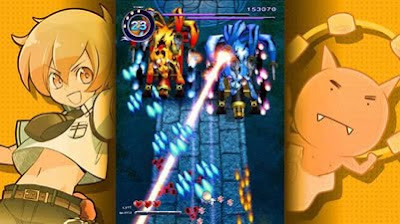 Damn, which one should I curse first?

There are only two buttons to be used in this game. One of them shoots, the other one fires a "curse" circle. You can aim where you're going to shoot in a 180º span in front of you, never behind you. Your fire direction is locked while you're shooting, so if you want to aim at another direction you have to stop shooting, aim and resume. Enemies and chests release colored stars that add to a combo/chain meter, and that's where the curse attack comes in, since it's the heart of the scoring system in Mamoru-kun. You can either drop a local curse or charge the curse in order to shoot it forwards. It lasts for a short amount of time only, but every small enemy that gets inside this circle gets cursed, becomes darker and plummets towards you while shooting many more bullets. Casting charged curses in small enemies kills them intantly, but larger enemies will block the curse and increase its radius, affecting every popcorn enemy that gets close to it. All items dropped are sucked into the character automatically if you briefly stop shooting.

Regardless of how you curse an enemy, all of the bullets shot by cursed enemies will turn into stars when they die - and that's the key to longer chains and higher scores. To keep the chain going you must do one of the folllowing: (1) get a star approximately every 2 seconds, (2) cast the curse in a larger enemy or (3) curse yourself. This third maneuver is done by dropping the curse and stepping inside its radius. While cursed you turn red, get faster and have an increase in firepower, but once the curse time is up you need to wait for it to recharge in order to cast another curse. Rank goes up depending on survival time and chain progress. The higher the rank the more enemies are spawned, thus you get more opportunities for an even higher score.

Another major concern when you play Mamoru-kun is time. The game doesn't scroll automatically, so if you want to just sit still and do nothing it's up to you. However, upon start you get a 5 minute timer. This is the time you have to reach the final boss. To increase the time you have left you can collect items and speed-kill the bosses from the unlocked "missions", recovering more than what you usually get by playing a regular stage. These missions are unlocked after you beat a stage, and are just boss battles with increased difficulty. If the timer runs out before you reach the final boss, indestructible death heralds will materialize and painfully kill you. Managing time is very important because depending on how you do it you won't play all stages. In fact, it's possible to beat the game by playing just one level, ending it with a low timer and going directly to the last boss fight. Speaking of which, there are two of them. Final Stage B has a huge battleship as final boss, whereas Final Stage A has this gigantic evil flower. I couldn't figure out the exact rules to get each one, but it seems that you have to play most of the game if you want to fight last boss A.

As I said, this is a weird game. I don't blame the convoluted scoring system for not liking it, my problem was actually with the controls. I didn't like the way you deal with aiming at all. And why not let the player shoot backwards? Another issue here are the loading times, which aren't really optimized and can get on your nerves. Some of the voicing is also childishly annoying, it would've made me uncomfortable if an adult saw me playing the game. What I did like is the art design and presentation, even with all the Japanese text getting in my way until I could figure out stages from missions.

When starting a game in Arcade mode you select between a tutorial and a prologue stage where you can already rack up some points (and also lose lives). Besides Mamoru and Fululu, the other characters available are Mayuno, Kinya and Beniko. They are all followed by these tiny demons that appear when you collect power-up pills, behaving differently for each character. There's the spread pattern, the forward pattern, the Gradius-like option style, etc. There are also two downloadable characters (Nowa and Luchino), but I didn't check them because I refuse to pay for something that should've been already on the disc or should be given for free to everyone who plays the damn game. This really pisses me off.

The game itself comes with the original Arcade version and a Story mode, where you play with all characters amidst lots of dialogue, rearranged stages and a score that's limited to a star counter. In Practice mode you can adjust rank and character power level. The Xbox 360 limited edition also comes with an arranged soundtrack CD (7 tracks in 25'08") and an Insanity DVD with some expert plays, including a speed run with Fululu and a high score run with Kinya. Watching this footage made me feel like shit with my rock-bottom 1CC high score. :(

My favorite character is sexy Beniko Higatera. Her adjustable spread pattern won me over. In the run below with her in full defaults (diff. 3, timer 5:00) my world/stage order was 4/M4→1/M1→2/M2→3→Final stage A. I could never get to the 5th world in time, but maybe that's for the best because the game gets nasty if you survive that much. 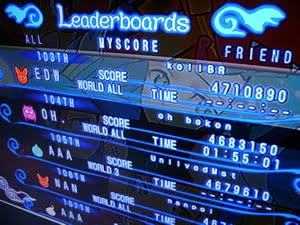