Such a cool name, and yet such a wimpy game... That's Stahlfeder, a german word/expression that means "steel feather". Let's be honest, guys, don't you agree that both the name and the package ooze coolness? They won me over completely as I was trying to select a new Playstation shmup to play last week. I just didn't think I would be completely done with it in less than two days, but I guess that beating the game in my first credit wasn't really a good sign of challenge, was it?

Let me be honest and tell you all up front that this is one of the easiest shmups in the Playstation library. If you want to get a 1CC blindfolded look no further, Stahlfeder is the game for you. It's an extremely watered down mix of some very well known series such as Raiden, Strikers 1945 and 19XX. In its default settings, it's that kind of game that takes you by the hand and before you know it you've reached the end. Most of the time you're heavily overpowered, you don't get punished when you get hit and a handful of health recovery items should help even the most inept shmup player to conquer victory. That's a real shame because the game's artistic values are kinda decent, and for most of the time the music is excellent. 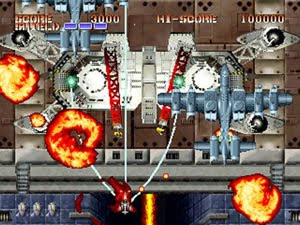 Lippenstift unleashes her bomb over the 1st boss

All four available pilots have unique characteristics to the standard attacks. Each one has a wide shot and a laser, both fired with different buttons and powered-up by icons of different colors. This is cool because there's no hassle to keep selecting the weapon you want to use, just pull the trigger and be happy. The third attack is the smart bomb, which as expected melts bullets and makes you invincible for a few seconds. All items, including health recovery cells, color-cycling power-ups and extra bombs, are brought by a carrier that has to be destroyed. Both wide and laser shots have five power levels, and each one must be properly upgraded by taking the related power-ups.

The most interesting trait regarding the graphics in Stahlfeder is that all the terrain area is sprite-based, while bosses and big structures are all made of polygons. There's nothing outstanding about them, but the combination of both techniques isn't a disaster either. The game has some mild parallax and uses zooming effects to a great extent, which is neat, but bosses could've used a little bit more animation. Slowdown ensues generally when you're using the wide weapon and there's too much enemy action going on. However, the real failure in this game occurs for a completely different reason, and that's the lack of challenge. It materializes in several different ways: lack of enemy bullets, main character gets too strong too soon, quite a few dead zones where absolutely nothing happens, too many health aids, too many extra bombs, etc. In the NORMAL difficulty, an extra health point is granted at the start of a new stage, and you never lose your power level when you get hit. Rarely have I seen such forgiving gameplay in the shmup genre.

Part of the difficulty - or lack thereof - can also be related to the pilot you choose. Blau stern has the best wide weapon (vulcan from Raiden), a decent laser and five health cells. Lippenstift has a good wide shot (3rd level pod weapon from Axelay, without the bending), the strongest laser and three health cells. Both Weiβ nacht's weapons lack side reach, but he's the fastest pilot, with four health cells. Schwarz Wind flies the slowest ship and has shitty weapons, but comes with seven health cells. For obvious reasons, my favorite characters are Blau stern and Lippenstift.

Scoring higher is dependent on surplus power-ups and end-of-stage bonuses. If you're maxed out in one of the items (bombs are stocked to a maximum of 8), every new icon will yield 5.000 points. Get through a stage unscathed with lots of bombs and your bonus will be bigger. The rest is simple: kill everything. Stahlfeder is so easy that even in the HARD setting it doesn't give much trouble. In this mode bullets get just a little faster, you lose one power level for the weapons whenever you get hit and there's no health recovery between stages. You do get a bulkier no-damage bonus, so at least the possibilities for scoring are better on HARD.

One of the reasons why some people still remember Stahlfeder is the fact that it lets you change the color of enemy bullets to your liking. There's nothing wrong with the default color scheme, but it's pretty neat to see a few pink bullets flying everywhere. Other than that, the game is pretty much forgettable. I know the only thing I'll probably remember in the future is that it has good music. And that it's stupidly easy to beat, unlike Santos's other Playstation shmup Airgrave.

I got my highest score playing the game on HARD. It was a perfect run, I din't get hit even once. Didn't I tell you this was easy as hell? 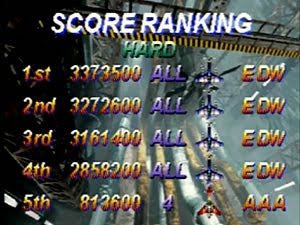