In the beginning of February my good buddy Jorge (aka coffeejoerx) and I decided to select an XBLIG shmup for a friendly competition during the whole month, and our choice fell on Xona Game's Score Rush, the prequel to one of the most anticipated titles by all shmuppers these last months, Duality ZF. Duality ZF has created a considerably warm buzz within the community, but since its release has been barred by whatever problems the developers are having with its publishing, Score Rush is here to quench the thirst created by the sequel. And I must tell you people, it suceeds in every possible level.

Score Rush is definitely one of the best shmups you can get for 80 Microsoft points (~1 US dollars), which is the most common figure you find in the XBLIG service as of now. I wasn't impressed at all by Xona Game's earlier effort Decimation X, so when Score Rush came out I didn't feel enthusiastic about what seemed to be another Geometry Wars clone. However, after talking to some people and checking a few videos here and there I thought it would be nice to try it. Needless to say, I was pleasantly surprised by this sparking, color-heavy, intense and fluid twin-stick shooter that's nothing like Geometry Wars. It's got a soul of its own, lots of charm and an incredible potential to provide genuine shmup "rush", as its name clearly implies. 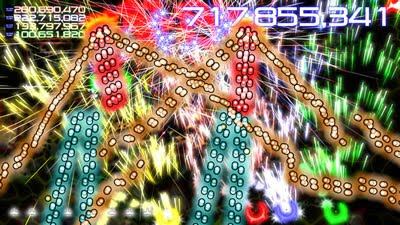 For a title that's so simple, the depth of the gameplay is nothing short of astounding. There's absolutely no bullshit in Score Rush. It's just you and your electrically charged shot, 100% benign power-ups and non-stop action from start to finish. It's so non-stop that you don't even see any indication of progress (i.e. stages) besides a report for the time you take to beat each boss, shown in detail when you get to the GAME OVER screen. These bosses are named by alphabet letters from I (first) to A (last) and blend seamlessly with the mayhem of bullets and colors amidst a plethora of abstract enemy spaceships, a design decision that seems odd but ultimately works really well within the graphical style of the game.

Following the concepts of the bullet hell school, the ship in Score Rush is just a few pixels wide. Weaving through countless streams and patterns while having a multidirectional shooting capability seems to be the natural way to go for twin-stick shooters, and is definitely my favorite take on this particular control scheme. The smooth HD overload of colors, bullets, shards and electrical sparks provides the perfect environment for a quick burst, but this intensity comes with a minor downside, especially if you, like me, enjoy playing very close to the TV screen: the game becomes very taxing to the eyes after about half an hour of playtime. As addictive as it is, I must warn people who have or are prone to have eyesight disorders to approach Score Rush with caution.

There are two types of power-ups in the game: one of them increases shot power, and the other adds trailing options. When maxed out, every extra power-up causes a localized explosion that nullifies nearby bullets. Every credit comes with three smart bombs that must be used wisely. Dying strips you off some power, just so you have to collect a few more power-ups to regain your previous destructive status. If you manage to survive long enough, at some point you will come accross a single 1UP to help you achieve the final goal. While the overall challenge level feels just fine, the scoring system is what makes Score Rush special. It uses a very simple risk-and-reward technique, in that higher score bonuses come with faster kills, be it for popcorn enemies or huge bosses. That's why memorizing patterns and places of enemy spawning is the key to a better performance. The closest you are to the enemy the more damage you cause, which leads to faster kill times.

Abusing point blank for faster kills will eventually lead the player to take advantage of screen shakes. When a mid-sized or large enemy dies, the shaking effect gives you a brief window of invincibility, which is invaluable to overcome bullet barrages and escape tight situations. This becomes more and more important as you unlock harder difficulty modes and face more dense bullet curtains. There's only one difficulty available upon start (Normal), and to access further difficulties you must complete the game on the hardest current one. Above Normal we have Hard, Expert, Crazy, Insane and Godlike. Enemies have higher base values in higher difficulties, providing for higher scores. Unfortunately, the high score table doesn't do any distinction between the difficulties - this is the only criticism Score Rush truly deserves.

Complementing the high definition graphics, the music in Score Rush is great and puts the player right in the mood for instant blasting. The game caters to the sensibilities of hardcore players and, for starters, represents an excellent introduction to the bullet hell style of gameplay. It's possible to play cooperatively with up to three friends, just bear in mind that score/lives are shared between everybody.

I was able to beat both Normal and Hard modes, unlocking Expert. It's important to mention that each difficulty has its own limits and rules (the highest the difficulty the highest the score). My best 1CC score on Hard was 276.091.912 points. Since Jorge and I concentrated on the Normal difficulty, my highest score in this mode was the following: 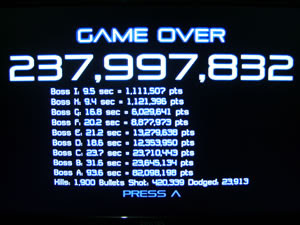