Finally, the third chapter of the Sengoku Ace series, an exclusive release for the Playstation Portable! Behold, Koyori’s voluptuous cleavage is yet again in display for some more welcome fan service (of course she’s back, a Sengoku Ace shooter without her isn’t a proper Sengoku Ace shooter). Even though it can be argued if Sengoku Cannon, also known as Sengoku Ace Episode III, is able to live up to the standards of previous chapters, it is common sense among everyone who has played it that the game is a letdown. I think this is only partially true - the problem with it is that the pros are certainly outweighed by the cons.

Sengoku Cannon retains the overall feel of Sengoku Blade, the previous chapter. It’s a horizontal shooter, and some of the same characters return in order to fight a new Dracula-like villain. While apparently the same from the outside, diving into the game will instantly make some (bad) things very clear. The most important issue is the frame rate, which isn’t ideal and makes the game harder than it should be. Then there’s the background graphics, which are all rendered in 3D and for the most part look sparse, poor and unpolished. Due to the complete absence of ground enemies, the game can be seen as a horizontal version of Shikigami No Shiro. The music is the least aspect prone to criticism, but there are parts of it that feel kind of displaced (one BGM reminded me of T. Hawk’s theme in Street Fighter). In the end, it’s clear that even though the Psikyo brand is stamped all over the game it’s not easy to see the company of old in the material delivered through the X-Nauts label. 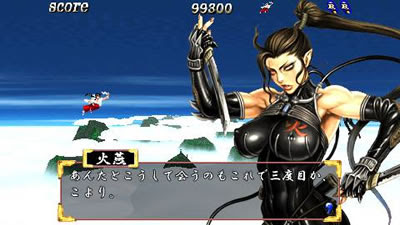 Going beyond the weaknesses, it’s important to mention that the gameplay in Sengoku Cannon does boast a new style. And guess what - it works. Gone are the charge shots of before, as well as the familiars who generated them. It’s only you flying alone in the vastness of the skies. And here there’s no stunning effect when you crash into an enemy, doing this will incur in instant death. Each character can use four types of attack: rapid shot, concentrated shot, cannon and bomb. Tapping the main fire button results in rapid shot, while holding it down results in the concentrated shot, but both are also mapped to different buttons. The concentrated shot drastically reduces the character speed so that you can move better against tight bullet patterns. Bomb is the usual panic attack, and cannon corresponds to a more powerful burst of energy with lower (manual) firing rate.

Not only is the cannon attack more powerful, but it is also the key to scoring. Killing an enemy with a cannon shot turns all its bullets into coins and extra points, but only if you haven’t hit him with a cannon before. Popcorn enemies die with just one cannon, but larger enemies must first be weakened and only then wasted with a final cannon shot so that all their bullets are turned into coins/points. If an enemy is hit by a cannon shot and doesn’t die you lose the chance to collect his bullet bonus. The good news is that the health bar on the lower right corner helps to know when the enemy is about to die, but the bad news is that this bar is shared between all enemies, so it becomes difficult to use it when there are multiple ones on screen at the same time.

Trying to properly kill the maximum amount of enemies with cannon shots is what defines the challenge during the stages themselves. I had good fun doing it. For this reason my favorite character is Mizuko the teenager, apparently a disciple of Tengai the monk. She has the fastest recovery for cannon shots, a decent compensation for being the weakest of all characters. Playing with her also comes with a cruel disadvantage: her concentrated shot is a pink beam of energy, and pink is also the color of 98% of enemy bullets. Guess what you have to deal with during boss fights? Speaking of which, gone are the huge transforming mechanical beasts of before. The only exception is the first one, all other bosses are just super-powered humans who spew more and more bullets as the game draws to an end. Mid-bosses are frequent and can be as difficult as bosses to defeat.

Other important gameplay aspects are power-ups (P increases the power of rapid/concentrated shots, B adds one bomb to the player’s stock) and extends (400.000, one million and for every million points afterwards). Bonuses for completing a stage are awarded based on cannon usage, fast boss kills and no-missing.

Stages in Sengoku Cannon have a fixed order. There are only five of them, but they get increasingly longer and harder, with no looping. Don’t judge the game on the first three stages alone, there’s a bit of the trademark Psikyo patterns deep into the last couple of levels. I only wish there was a better balance for the character’s speed - I can’t help but feel that when you’re using the rapid shot you’re too fast, and when you’re using the concentrated shot you’re too slow (bad frame rate!). Shifting between these two speeds during a heavy bullet shower is almost always fatal. All other characters are well balanced and stronger then Mizuko, but their successive cannon attacks aren’t nearly as efficient as hers. Tengai the monk appears possessed in the final stage, and is unlocked as a playable character by finishing the game with continues. To unlock Junis you have to beat the game without continuing (she seems to be on par with Mizuko regarding cannon shot ratio).

X-Nauts was kind enough to include a practice mode in the game. However, you can only practice the stages you reached with the characters you have already played with. Likewise, a Hard difficulty is unlocked only for the character you beat the game with. Why, I wonder? Forcing replay value with such dictatorial devices is just stupid.

If you’re able to overcome the bad frame rate and the ugly graphics, Sengoku Cannon might be an enjoyable shooter for you. I admit I liked it more than I think I would, based on what I had read about it prior to playing. I feel a bit guilty for not choosing Koyori this time around, but Mizuko was a much better scorer for me. The result below was achieved with her. 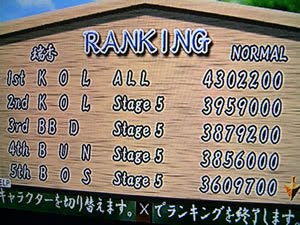