First the good things about Firepower 2000. Graphics and music are decent. Very nice boss explosions. Short albeit cool introduction sequence. Ability to play with two different “ships”. A little variety in the weapons department. Given all these positive aspects, it wouldn’t be expected for someone to not like the game, but in the current state of my shmup affairs I found it just plain boring. And I shall disclose the reasons why in some of the paragraphs below.

Spiritual sequel to the much better Silkworm and the computer based only SWIV, Firepower 2000 preserves the main idea of playing either with a helicopter or an armored jeep (or both in co-op) while keeping SWIV's top down vertical style. The game is also known as Super SWIV in Europe, having received a port for the Mega Drive under the title Mega SWIV (an European exclusive release by the way). In any existing incarnation, there’s no doubt that this game looks promising from the outside. In fact, I had already played the Mega Drive version before trying this one, and I honestly don’t recall being so utterly stricken by boredom. This could derive from two possible reasons: (1) I’m older and as a consequence I’m demanding more from my games, or (2) the SNES version just isn’t as fun as the Mega Drive port. Whatever it is, I had a hard time finding the motivation to play Firepower 2000 in the past weeks. I only did it in order to let my fingers rest from the strain of slashing devilish creatures in Sol Divide (material for a future post ahoy!). 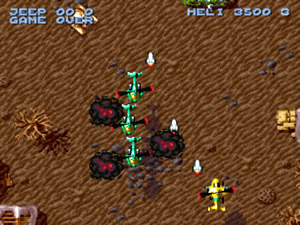 Only three against one? Get serious, please

Upon starting you must choose the craft you want to pilot by pressing SELECT at the opening screen. The jeep is immune to flying enemies and is able to fire in any desired direction, but is hindered by ground obstacles. The helicopter flies over all the scenery but can be destroyed when crashing against airborne enemies. Opting for the jeep will make you play with a boat during part of the 3rd stage, and regardless of your option the 4th stage has a long section where you’ll be flying with a yellow jet. All of these vehicles/aircraft share the same weapons throughout the whole game though. These are activated and powered up by chips released when yellow boxes are destroyed, in five different types: bullets, flame, plasma (blue spread, Twin Cobra-style), laser and ionic (straight shots that split in two when an enemy is hit). They are selected with the shoulder buttons.

Other items include limited special weapons, stars and bubbles. Special weapons are released by the same yellow boxes and are triggered by a separate button: X (straight missiles), S (scorching ring of fire) and H (homing missiles). It's possible to stock lots of them. Stars appear from certain destroyed enemies and are worth 1.000 points each upon stage completion. Once a bubble is sighted, shoot to release it and fly into it to get a temporary shield (12 seconds) or keep shooting if you want to detonate a screen-clearing bomb. Extends are awarded with 50.000, 100.000 and for every 100.000 points after that.

Choosing to go with the jeep or the heli is mostly a matter of personal taste and gameplay style. I prefer the helicopter because I feel more comfortable with it. They both travel at the same speed, but with the heli I don't have to jump when I'm stuck (yes, the jeep is able to jump). Regardless of which one you choose you'll be at the mercy of the same things that irritate me, such as the wide horizontal stretch of the screen, which lures you into sweeping from side to side just to be fried by an off-screen missile or fast jet. The unpredictable pattern of early enemies is also annoying, especially in the first stage, but the design aspect I dislike the most is the sound you hear when your weapon hits something... It feels unfitting and slightly grating to my ears.

I'm rarely prone to such antipathy towards a game, and in the case of Firepower 2000 my attitude seems out of place given its obvious aesthetical quality for 16-bit standards. I know this sounds like I'm being excessively picky, but I can't help myself. I will not dismiss the game for everyone out there though because I know some people enjoy it, and if you haven't tried it yet there's no reason why you shouldn't.

I will comply that co-op play is more fun than your usual equivalent shmup, since each person gets to control a completely different machine. Unfortunately, co-op doesn't go hand in hand with 1CCing habits.

Completing the game will add a considerable bonus to the final score. This bonus is based on the number of lives you have in stock when you beat the last boss, but I wasn't able to figure out precisely how it works. On a minor scale, it's also possible to milk most of the bosses for extra points on popcorn enemies. Regarding the final boss, once you've destroyed the bunker and uncovered a black hole in the ground you have to wait for a special weapon to come in order to beat him (quite like the final shot on the Death Star from Star Wars Episode IV).

Since Firepower 2000 has no continues you're forced to go for the 1CC if you want to beat the game. It's not that hard to do it with the heli, but playing with the jeep is a completely different challenge in itself. I used the helicopter, and I guess my high score was at least mildly decent in face of my overall lack of enthusiasm. 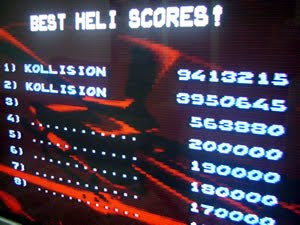