During Easter time I went in a relaxation trip to beautiful Aracaju, one of the state capitals in Northeast Brazil. The flight has two connections/stops, so the problem of finding what to do is mostly solved by reading a good book or playing a good game. Guess which one was my choice this time around? The PSP was fully charged when I left, and the chance to finally try one of the PSN/PSP Minis was at hand. Minis are downloadable games that run both on the PS3 or on the PSP, and if it wasn't for the fact that these games are designed with the PSP in mind you could easily say that they are the equivalent to Microsoft's XBLIG titles. Cheaper, supposedly more simple games to be enjoyed with casual purposes.

In this sense, The Flying Hamster is a perfect fit for shmup lovers who want a quick burst of shooting action. The design is cute, the colors are plentiful and the challenge is pure old-school, so anyone who ever had a chance to play a horizontal shmup will feel right at home. More experienced people will immediately recognize the influence of Parodius everywhere in the game, from the nonsensical story to the multitude of penguins in the egyptian stage. Watch the whole animated intro, get your powerful leaves spinning and expect humorous bits all around. Although a lot less complicated and not in the same difficulty level of Konami's stellar franchise, it's refreshing to know that The Flying Hamster isn't a walk in the park, requiring a reasonable amount of practice in order to be beaten. 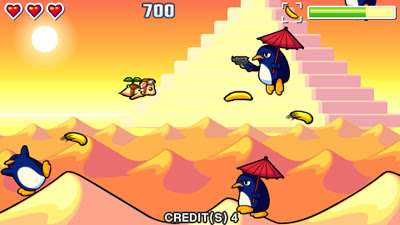 Newton's girlfriend was kidnapped by an evil bird, so he flies off to rescue her. Being a hamster, supposedly a small animal that can't carry any weapon while flying, Newton relies on a single spit-like shot and whatever lies ahead of him, including berries, bee hives, sunflowers, beer cans, bananas, torches, hot food, rose thorns and bird nests. He's also able to fire a more powerful charge shot for all weapons, including his default spit. Special weapons have limited ammo, but all accumulated ammo with whatever weapon you're using is preserved for the next one. Most weapon sources are also respawn after a brief while, so it's often possible to fill your weapon stock more than once using the same source. Getting crushed by a wall means instant GAME OVER regardless of lives left, but the good news is that every stage starts with three fresh lives. On top of that, random refills also provide some welcome recovery aid - you can't have more than three hearts at any given time though.

The inherent gameplay simplicity gets put to the test by a stage design that presents a nice variety throughout. Goofy enemies abound and provide good laughs, with background graphics that include skies, forests, sand landscapes, pyramids, cluttered Japanese streets, stormy seas, underwater vaults and an appropriately named "hamster defense force" fortress in the last stage, complete with undescribable creatures, futuristic machinery and an alien last boss to boot. The scrolling speed picks ups every now and then, with a high speed scramble obviously inspired by Gradius II in the last level. Some weapons are more suitable than others in a few sections, with my favorites being beer and bananas.

As straightforward as it is, The Flying Hamster still has a few secrets. The biggest one is the hidden level accessed by hitting the X spot in the lower part of the pyramid in the second stage. Regarding scoring, it's important to mention that killing bosses fast with powerful weapons results in less points than by hitting them with the default spit shot (try doing this with the mushroom mid-boss in the first stage and see what happens). The penguin boss in stage 2 can also be theoretically milked forever by destroying the concrete beams and the smaller penguins he summons.

Learn how to use the fire weapon, rookie
(courtesy of developer and YouTube user GameAtelier)

With the exception of the hidden stage, all levels can be played directly once you reach them, which is great for practicing. A few parts need solid memorization to be won, and these are probably the bulk of the challenge in the game. Once you beat it an extra Hard mode is unlocked, with a different color palette and much more enemies to deal with. Whatever difficulty you choose, the fun factor in The Flying Hamster is enhanced by an upbeat soundtrack that perfectly matches the relaxed feel of the game. The lighthearted epicness is impressive and makes it a worthwhile investment if you're into cheap downloadable content or just want a solid handheld shmup romp. Thankfully the in-game humor is quite lovely and not nearly as dark as in this heavily warped preliminary trailer.

The 1CC high score below was achieved amidst several cups of coffee while waiting for departure in Brasilia's airport. Props go to my girlfriend for helping me figure out the laser from the feather attacks during the first boss fight! 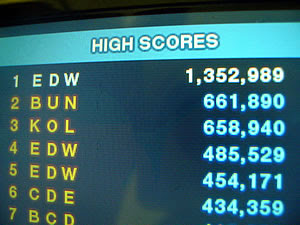