One day someone asked me about shmups which were insect-themed, and the only ones I could think of back then were Insector X and Mushihimesama. I've just now discovered another one: Cyber Core. I would never have guessed insects are all over this game just going by its title or the generic HuCard box insert. As a name, "Cyber Core" is quite deceiving, since there isn't any really strong emphasis in cybernetic stuff or cores for that matter. What you get is an average PC Engine title that doesn't stand out, except for an unfair challenge spike everybody's bound to encounter in the eighth and last stage.

Developed and delivered by a rather unknown company, Cyber Core's main influence is definitely Dragon Spirit, in that the normal shot is complemented by ground shots that are fired at a fixed distance from the ship's hitbox. It works exactly in the same way, and the similarities even extend to the story: in Cyber Core, the huge insect you control is actually a transformed human, the hero who must rid the planet from the alien bug infestation. The intro to the first stage even includes his metamorphosis and the ship's departure into the battlefield. 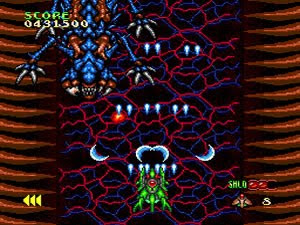 The battle of the bugs

With a default insect-ship you die instantly by colliding with a bullet or an enemy, so don't hold yourself once the green bug that brings power-up icons passes by from one side to the other. Hit it non-stop so that it leaves behind four types of icons: the red, the blue, the yellow and the green. Getting one of those will immediately increase the ship's firepower and add a shield cell to the shield bar. Keep getting items of the same color in order to upgrade the current shot type and fill up the shield bar. By doing this the red weapon will turn into a spread pattern of large yellow circles, blue will result in a thinner but even wider spread, yellow will evolve into straight laser shots and green will add surrounding arches that are capable of stopping bullets. The downside of powering up is that the ship's hitbox increases enormously, making it difficult to dodge and preserve power. Getting hit consumes one shield cell, and when all shield cells are gone the ship starts losing its power-up levels until you die if hit when you're back to default conditions.

What's neat about the power-up scheme is that each one of the four weapon types gives the ship completely different sprites. Some of the final forms clearly resemble a mite, a beetle and a grasshopper. What's not so neat is the fact that once you take a different power-up color you change the weapon but you also get back to just one power level above the default. It doesn't help that power-up items descend quite slowly once they're released, often causing the player to pick one up unintentionally during busy sections.

Other items might appear randomly by killing regular enemies. There are screen wipe-outs, temporary invincibility (15 seconds), extra shield cells and 1UPs. Speed can be adjusted in three steps up and down by pressing the SELECT button.

Pesticide bug-ship to the rescue!
(courtesy of YouTube user Vysethedetermined2)

There isn't much to be said about the background graphics, aside from the fact that they look generic and unremarkable. Unfortunately, the same can be said about the music. The variety in enemy design is a bit better though, with all sorts and sizes of ground and flying bugs to be killed. Some stages have mid-bosses, but both mid-bosses and bosses are overall on the easy side. In fact, the game is pretty undemanding until you reach the last couple of stages. On the other hand, the developer clearly broke the difficulty knob in the very last stage, with all those tiny blue thingies that blaze across the screen at an incredible speed. It took me a long practice session until I was able to get through the whole stage with only one checkpoint. Oh yes, baby, die in the boss and play the whole stage again!

Besides random 1UPs, the regular way to increase life stock in Cyber Core is by winning an extra life for every 100.000 points. Fortunately the game doesn't encourage checkpoint abuse when you try to play for score, since it gives you a substantial completion bonus based on the number of lives you have left. It's amazing how such a simple routine is capable of increasing the replay value of a potentially drab shmup. It takes Cyber Core out of the ordinary and serves as a lesson of basic yet effective design criteria to be adopted by all serious indie developers out there.

All things considered, I can't really recommend Cyber Core except for shmup-nuts or for those who really love the PC Engine/Turbografx-16. Below is my high score, picture taken during the end credits shown after the bug hero managed to save the planet. 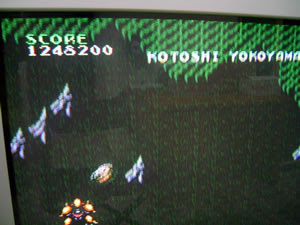