There's nothing like forcing yourself to play a game you hate. Now we all know there are several ways to do this. You can force yourself out of sheer OCD or masochistic tendencies. You can lose a bet. You can be left in an empty room with nothing but the dreaded game to play. Or you can enter a competition where your peers genuinely love the game you hate. This last option is an interesting one, and by now I believe it's the best way to really wade through a game you despise. You might see beyond what frustrates you so much and even come to enjoy it for what it is. Every game has a comfort zone where its reason to exist starts showing itself, and during these last weeks I was able to reach such zone in Sol Divide, one of my early disappointments with the gaming genre I love the most.

Right after my gaming habits shifted completely to shmups, Sol Divide for the Playstation fell on my lap. For whatever reason I gave it a chance, and the experience left me nearly traumatized. It was definitely one of the worst shmups I had ever played, and for me it was hard to contain the disappointment when talking or writing about the game. I saw it as a failed experiment in merging a shmup with a beat'em up, a foray into unknown territory that was nearly unplayable for a newbie such as myself. Seriously, this game haunted me in my dreams.

Today I am aware that Sol Divide requires a very specific mindset to be played. Don't think that shooting will take you where you want to go - this was my main mistake back then. And bear in mind this is a Psikyo game. Though not quite visible to the eye, the company's trademarks are buried deep within, and being familiar with Psikyo in general definitely helps to break the ice here. 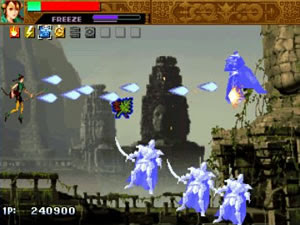 Graphics and sounds are probably the best features Sol Divide has going for it. Characters and bosses are very nicely animated, and the music suits the atmosphere really well. Backgrounds are rich and colorful, even if they don't scroll even one entire screen per stage (by the way, stages in this game are some of the shortest ever designed in any shmup). The rule of thumb is that you must go through just a few enemy waves and then fight the boss. The medieval setting involves a wizard doing all sorts of evil deeds, which prompts the three selectable heroes to fight his army of undead and mythical creatures (the starting stage changes depending on the character you choose). It does resemble an RPG, but the game is actually quite relentless in its awkward pacing and overwhelming challenge. If you're used to only holding the fire button from start to finish in a shmup, be prepared for a whole new experience when trying Sol Divide.

Almost every defeated enemy leaves an item behind, and these can be either magic spells, healing herbs or power-ups for the main shot. All heroes seem to move at the same speed, and besides the main shot you're also allowed to cast spells (selectable with another button) and slash enemies in up-close combat. Learning how to perform the slash combos represents 90% of success in this game, and here's the command sequence for each character:
While Vorg and Tyora have stronger combinations for shot + magic, in my opinion Kashon is the best character not only because his combo feels more natural, but also because he's got the best reach. Performing these combos is also of great importance for scoring, since killing an enemy in the last slash adds a ×4 multiplier to the enemy's base value. Holding slash with diagonals results in different attacks that are powerful but add nothing extra to the score.

Mastering the use of magic spells is another important part of gameplay, but it becomes less critical as you start to get familiar with enemy attack patterns and their related timing. In my final strategy I only used "phoenix" in the stone griffon, "freeze" in the dinosaur form of the last boss and "fire" extensively in several parts of the game. The magic stock is represented by the meter right below the character's health bar and is slowly filled by killing enemies with the slash attack, but it does fill faster when you take potions left by defeated enemies. Not all spells are useful for every situation, and a few of them can only be used once, so knowing when to use them is essential to make progress in the game.

Keeping in mind that it's safe to touch an enemy as long as it is not attacking in any way, a good gameplay strategy is: (1) try to take out everything you can by using the slash combo, (2) shoot when it's not possible to slash and (3) cast spells when things get too cluttered. Performing combos is where the game pisses people off, since the control scheme is pretty clunky and often leads to frustration, especially when enemies close in and overlap their attacks, draining your energy pretty fast. It's because of stuff like this that Sol Divide is prone to giving headaches and rage fits. On its defense one could say the game is ridiculously short, even for shmup standards, so the rage factor gets diluted when playing successive credits. My moment of truth came when I finally nailed how to anticipate enemy moves and block them with combo attacks. And I must confess - because nothing is etched in stone - that I started enjoying the game after that. A game that I used to hate. Yeah, I know...

XS Games ported Sol Divide to the PS1 in the west very late in the console's life, complete with its well known poor quality standards on localizations. Even though the gameplay is intact, the port is aesthetically butchered because it lacks all the brief dialogue that should be displayed whenever a stage starts, while the few remaining texts shown in the ending screens were not translated at all. There is an Arrange mode that focuses on the RPG elements and supposedly increases the game length considerably, but with the lack of any saving functionality you won't be able to preserve stats and checkpoints. I didn't even bother to check this mode.

Going to the options screen allows you to activate the display of in-stage score, which also enables you to see the multipliers you get from slash combos. My time with the game resulted in the high score below, reaching stage 2-2 with Kashon on difficulty 5 (NORMAL). 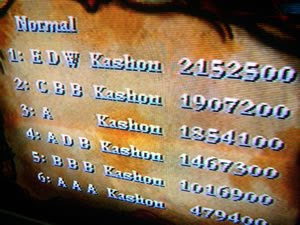