When a prototype spaceship is sent to war, things get more heroic than usual and the sense of accomplishment should achieve a similar status. Somewhere in the near future, Isagoras-001 is the name of the ship, and Crow is the codename of its pilot. Invaders and separatists from other solar systems threaten the Earth and other planets such as Mars. They must not prevail, for the fate of the galaxy rests in your skill and your ability to overcome the insurmountable odds.

And that's the main story of Isagoras, depicted through text balloons and cut scenes as you plow through five stages of widescreen vertical shooting action. I admit I was lured by the concept and by the varied backgrounds from the first level, but the truth is that this game is just painful. With such a cool-looking cover and a name that immediately brings to mind Treasure's overrated Ikaruga, you can't help but feel cheated once you start to realize what Isagoras is all about. There are many wrongs to it, and the saddest thing is that the Spanish developers were probably trying to come up with something different, only to fail miserably in several fronts. As a result, epicness gets reduced to boredom, and motivation is utterly ruined from the inside by stupid game mechanics. 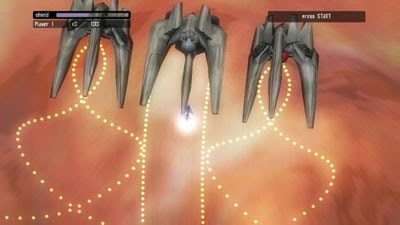 Fighting baddies over the red surface of Mars

Ship sprites draw immediate attention upon start. The ship looks like two smaller spaceships glued together, and I wondered if there was a gimmick behind it reserved for later. There isn't any. The ship fires a single shot that cannot be powered up because there are absolutely no items to collect in the game. Health recovery items for the energy bar you have for each life? Forget it! Entropy is the absolute rule in Isagoras, therefore energy lost will never be replenished, not even when a new level starts. You must also learn how to deal with the rather slow speed of the ship, and memorization is the only way to stand a chance in sections where multiple enemies swarm around you. Each life grants the use of three special attacks, which can be deployed in two different ways: the left bumper slows down all enemies for a brief while, and the right bumper triggers a powerful beam that melts enemy bullets and gives you invincibility while it lasts.

There's nothing special in what I described above about the gameplay, but there's a lot more to worry. When I started playing the game I suddenly noticed that my score in the third stage had decreased from the one I had prior to fighting the second boss. To my horror, I realized that the game punishes you every time you get hit by taking away approximately 5% of your score. In other words, if you have 5.000 points and a single bullet hits you the score drops to 4.750 points. Talk about a frustrating feature! To make things worse, there are instances where you get hit without explanation during those ENEMY ALERT messages that precede boss fights. There are no obstacles anywhere during the whole damn game, and then you lose health and points out of nowhere! Honestly, when this happened I felt like punching someone in the face.

Graphically, Isagoras isn't really bad for an indie release. It uses simple textures and colors with good results for backgrounds, although it falls short when it comes down to enemies, most of them comprised of small formations of drones and ships with erratic movement. Large ships appear from time to time, and are the best targets to achieve more points. Screen tilting is used extensively, but sometimes the game exaggerates and makes the simple act of controlling the ship a real chore. The soundtrack has lots of guitar work but is ultimately awful, and you can tell it's not going to work by the depressing music that plays in the opening screen.

The human race is in danger!
(courtesy of YouTube user TheSandman83)

The only moments where the game offers a small degree of (fair) excitement are during boss fights. They all have these colored spheres/cores as weak points, and come with a good variety of attack patterns. Another glimpse of something that actually works is the meteor barricade of the third stage. On the subject of co-op play, the act of overlapping both ships increases firepower while the controllers vibrate (you can't turn it off). Cut scenes are correctly implemented since you can skip them instantly, but part of the storytelling is annoyingly intrusive. As if bullet visibility wasn't already an issue, sometimes the messages block a good portion of the screen while you're being bombarded from all sides.

Isagoras could've been a great game, but it fails in almost all aspects that matter. There are no continues, but you can practice the stages you have already beaten. The only visible difference between the two available difficulties is that on EASY you start with 9 lives in stock, while on HARD you start with 5.

The default #1 spot at the high score table marks 10.000 points. My target was to top this score, which wasn't easy in face of the idiotic scheme of losing points by getting hit. As you can see below, the objective was surpassed just slightly (HARD). 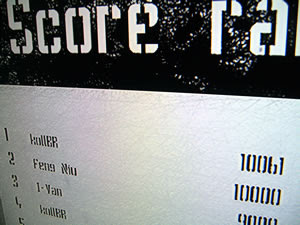