The Japanese anime TV series Macross, also known as Robotech in the west, was rather obscure on TV during my childhood, but I remember watching a few episodes and thinking it was a very cool cartoon. I don't recall much about it aside from that catchy short music theme that plays in every Macross video game ever since they started appearing on home consoles. Almost all platforms have their particular version, but the SNES game is a serious contender for best shmup based on the franchise. However, Macross - Scrambled Valkyrie stands on its own because it's simply an astonishing game from beginning to end, ranking pretty high in any list of SNES favorites, including mine. Fan service and pure nostalgia are also guaranteed by the cool intro and the amusing bits of Engrish.

The story of Macross is about an all-out war of humanity against evil aliens, and was unique in its time for mixing sci-fi concepts with cheesy romance and music. With the exception of the romance you can expect quite the same in this game. The designs for characters, enemies and stages are decently varied, abusing the graphical capabilities of the SNES through gorgeous colors and textures, with heaps of parallax here and there. However, it's the selection of three very different characters and the resulting variety in gameplay that attests the awesomeness herein. Each character has very defined strengths and weaknesses, which demand specific approaches for a player to conquer the game. My choice of character fell on Max, and I will explain why in a few paragraphs. 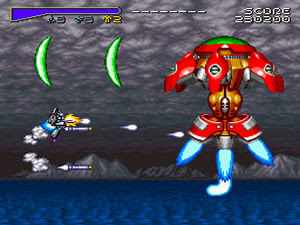 Each pilot controls a Valkyrie ship, a warcraft built upon alien technology that's capable of assuming three different forms: fighter (aircraft), gerwalk (half aircraft/half robot) and battroid (robot). The input scheme is pretty basic and uses only two butons: one to fire, one to switch forms. Firepower is somewhat balanced because the three forms have distinct speeds (fighter is the fastest, battroid is the slowest) and different shot types. Hikaru, the first pilot, has the most straightforward patterns, Max relies on a close-range plasma cloud + homing shots and Millia adds brute force on her battroid blast. Each form has three power levels and is separately leveled up by taking "P" icons left by mini-bosses and red enemies - the currently selected form is the one that will get powered up.

Survival is guaranteed as long as you have energy left in the lifebar, so if it's gone it's GAME OVER. Every time you get hit you consume some energy and lose one power level for the currently selected form. "S" items provide partial energy recovery, but the rarer blue-haired face, found when some mid-bosses are defeated, will replenish the whole life gauge instantly. Even though the game has a limited amount of continues, it's possible to get extra ones by finding the red arrow pointing up, hidden in fixed locations in every stage. They serve a more noble purpose if you're going for the 1-credit clear because each hidden arrow adds a precious chunk of 50.000 points to the score. Another important scoring hint is to get all items you can, since each one is worth 1.000 points.

Playing with all the different weapons is great, but the coolest gameplay aspect of Macross is the ability to capture enemies to fight by your side. Every time you stop shooting the ship will glow (imagine a raw version of the golden shield from the Darius series). While glowing, get close to an enemy and watch it change its color and join the human forces against their own kind, their names appearing to the right of your energy gauge. Not all enemies can be captured, but every captured enemy has its own unique behavior: some will swing back and forth, some will rotate around the Valkyrie, some will move erratically and shoot, some will even fire lasers or home on enemies until they're toast. Not all captured enemies will follow you during boss fights, and some will eventually die (this could be based on your energy level, I'm not sure). My favorite capture is this round minion found in the 4th stage, the one that homes on enemies. After I seize one of them it will follow me until the very end, providing invaluable help against popcorn and bulkier enemies alike.

Note: there are times when it seems you've been hit but you don't lose any energy. That happens because during the exact moment you switch forms you have a nick of invincibility. Even though this seems to be a worthy feature to be exploited, it's not really a good thing to count on it in the heat of the battle.

One of the criticisms I often see on this game is the length of the stages. This sounds strange to me because I think they're not that long, and with seven levels to go through the game length seems about quite right, and on par with most of the other shooters from its era. In fact, Macross - Scrambled Valkyrie does everything right in this regard, with the high speed section of stage 4 strategically positioned to give you a break from the overall slow pacing of the game. As with most good 16-bit shmups, Macross rewards consecutive plays once you've memorized the trickiest parts, and the variety in challenge you get with each available character is great. I like Max because of his battroid homing shot, definitely the best choice if you want to score higher (even enemies behind walls will not escape his wrath). On the other hand, his gerwalk shot (a kind of passive plasma thrower) is really awkward to use, but once you get the hang of it lots of bosses become a lot easier to beat.

Macross - Scrambled Valkyrie is easily one of the top three shmups on the SNES. It's a bit sad that it was never released outside of Japan, which probably hurt its much deserved success. When ranked against Axelay I think it loses by a nose just because of that game's heavenly soundtrack - not that the music in Macross is bad, it's actually quite engaging and atmospheric. I've only had glimpses of other shmups based on the Macross franchise (NES, PC Engine, Saturn, Playstation), but from what I've seen I doubt any of them will top this awesome SNES game.

The ending halts in a last credits screen, forcing the player to reset the console and go to the OPTIONS to check the high score. Here's the result to my 1CC campaign with Max on NORMAL: