Coming out from SNK in its pre-Neo Geo days, Prehistoric Isle in 1930 is a dinosaur-ridden shooter full of creativity and heavily bent on destroying unaware players who refuse to approach the game in a methodical way. On my first sessions, while flying back and forth to Rio, it was excruciatingly hard just to get past the second stage. Sure I could blame the PSP format and its stinky d-pad, but even after I turned on to MAME for practice it took me a long time to feel comfortable with the game and get the confidence needed to return to the PSP.

The SNK Arcade Classics 0 compilation was released in April 2011 for the PSP in Japan, and a first round of testing quickly showed that Prehistoric Isle was the highlight of the game selection - for us shmuppers anyway. It was just too cool to be left aside, and really well made for a 1989 title. If there ever was anything game-related made with dinosaurs that sucked, the people involved should be hanged and sliced to pieces. There’s such a strong and fantastic aura about dinosaurs that even the most lackluster products involving these extinct animals aren’t really a waste. Of course that’s not the case here, so shooter fans who dig great production values and a good challenge will have nothing to complain about.

A biplane (or biplanes in co-op play) is sent on a mission to investigate strange occurrences in the area of the Bermuda Triangle, around a “Greenhell Isle”. The island is dangerous and filled with all sorts of prehistoric menaces, from insects to cavemen and large reptiles. There are no signs of civilization anywhere, and the only help you get comes from inside the flying eggs that carry power-ups. 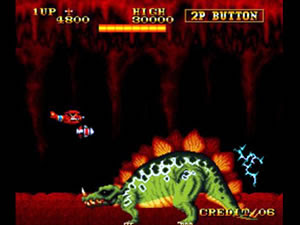 A clunky stegosaur lurks inside the caves of the last stage

One of the most cruel facts about Prehistoric Isle is that it deceives the audience into thinking that the pod/orb you get once you collect your first power-up will be there to help you throughout the whole game. You're allowed to rotate it clockwise around the plane at the press of a button, taking advantage of its R-Typeish nature of blocking most incoming fire, damaging enemies and providing extra firepower. However, after a certain amount of beating the pod will lose its color (some people say it "rusts"), and the next damage taken will make it disappear. To restore the pod's health you must either take another power-up or collect a specific special item (keep reading). Problem 1: once you reach maximum power (5 Ps), power-ups cease to appear. Problem 2: the special items are random and sometimes don't appear at all.

Once the pod disintegrates, power-ups start showing up again. Then the whole process of activating the pod and further increasing its strength restarts, but depending on when this happens you're pretty much overwhelmed and screwed beyond belief by the prehistoric creatures and unforgiving bosses. It's sincerely disconcerting to see a great credit end in sheer desperation due to the loss of the pod. This realization is the bane of the gameplay in Prehistoric Isle: all the player's efforts must be aimed at preserving pod health. Let it take hits only when extremely necessary, such as during the fight against the second boss, and pray for one of the healing special items to appear at key points in the game. Besides power-ups (P) and speed-ups (S), destroyed eggs also bring money ($, worth from 100 to 1.000 points), a 5s time-bomb, a rapid-fire powerful cannon or an all-encompassing pod shield that makes you virtually invincible. Now here's the catch: only these last two items (the cannon and the shield) restore the pod to its full health once their temporary effect has passed. They may appear only at certain points in the game: twice in the 1st, once in the 3rd and once in the 4th stage. Sometimes they do, sometimes they don't, it's actually very common to play the whole game with none of them appearing at all.

Without the pod there's no chance at surviving in the game. Its protection function cannot be used when you're at full power, but the extra weaponry it provides should be exploited at all times. When pointing forward, it will replace the normal shot with a powerful cannon; diagonals down will release bombs like in Darius; pointing up and down unleashes a fire wave that bounces on surfaces; and diagonals up shoot energy balls in 45° that also bounce back. Anticipating the danger is the best way to use the pod's capabilities and have a chance at winning. Factor in the timing when moving the pod and you have yet another gameplay aspect to deal with, since turning it past the point where you want it to rest can be fatal. On the PSP you can configure the buttons at will, but unfortunately it does not offer an autofire option. We're talking about hardcore portable shmupping at its best here!

Though very hard, not everything in the gameplay works in favor of difficulty. Touching walls will only make you bounce slightly, and it's impossible to get too fast by taking successive speed-ups. Extends are score-based and come with 100.000 and 200.000 points only.

Watch out for the brachiosaur's bite!
(courtesy of YouTube user DarkMurdoc666)

Some hints to score higher: kill all enemies in a single wave to get an extra bonus; certain enemies spawn smaller versions of themselves or generate insects, so letting them live is advantageous; wait to collect money until it's about to leave the screen, since it's always worth more points this way; rank is related to survival, and more enemies are generated the longer you go on without dying.

Prehistoric Isle in 1930 has tons of variety in its enemy and stage design. With the exception of the quick second stage all levels are quite long, with bosses and mid-bosses that are described by brief stat messages before they enter the screen. Cavemen will try to bring you down by grabbing the plane and inducing an extra amount of weight, never mind the lack of proportions between them and everything else you see. Every stage is unique in its setting, the use of color is outstanding, sound effects of animal growls abound (there's even a nautilus that barks!) and the music is so good and fitting it could be used in any Land of the Lost episode or remake with excellent results.

On the SNK Arcade Classics 0 disc, SELECT pauses the game and calls up the menu, and START initiates a credit. Prehistoric Isle can be played in its original resolution or stretched, and either one is fine. Extras include a sound test and a graphic gallery with posters and arcade flyers for all titles. I played the game with the PSP connected to the TV, and cleared it losing two lives in the last section of the caverns, just before the tyrannosaurus (the same one that growls in the game's opening screen and isn't as tough as a few of the previous bosses). Sequel: Prehistoric Isle 2. 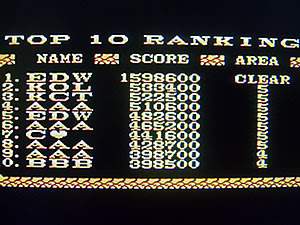