Not too long ago my video game routine wasn’t restricted to shmups only, and platform and run’n’gun games were also an active part of my hobby. I can’t play them for the life of me these days, but I still cherish each and every one of my old achievements.

Recently I was able to reminisce those days by playing another genre hybrid. No other console has as many shmup hybrids as the NES does, and Xexyz is probably one of the most balanced mash-ups of platformer and shooter, in that it combines each genre in equal proportions in a story that takes place in the year 2.777. Xexyz is the name of the kingdom that represents what’s left of humanity. You play as Apollo, a lonesome fighter who battles an alien mechanical menace to save Xexyz. Heroic, you say? Sure, but we all know his real motivation is none other than rescuing a beautiful princess. And you still doubt the fact that women are behind every single act in a man’s life?

Going back to the ancient dynamics of jumping and shooting was nice and brought back some unforgettable memories, such as pit deaths. They’re all over Xexyz, especially from stage 5 onwards, where I would often lose lots of lives by badly timing my jump against the droplets falling from the ceiling. Exploration is intense, and the adventure side of it demands that you talk to a handful of characters and dealers in order to increase your firepower and advance to the next areas. I admit I was a bit scared of being overwhelmed by this aspect of the game, but fortunately it never felt like grinding – in that regard, the length of the adventure is fine and makes for a good old fashioned gaming session. 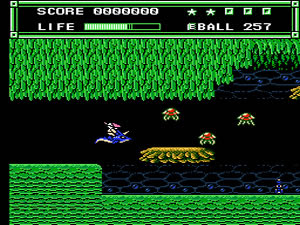 The quest takes place in 11 worlds/stages. Odd numbered stages start as platformers, where Apollo needs to battle enemies and take a hidden Force Star from a demon in order to have access to the mechanical castle. Once inside, he needs to go through a series of chambers, a brief interlude comprised of two to three sections of horizontal shooting, a few more platforming rooms and then the boss, for which he'll receive a flying platform for a shooter-style fight. Even numbered stages are short shmup levels where you fly a cyborg rider given as a gift by the people you just freed in the previous world. The boss has to be fought on this cyborg rider as well.

In the platform stages Apollo is allowed to jump and use weapons (shoot) and magic. The basic weapon is pretty weak, but better ones are revealed later: 45B Ball (appears already on the first stage), the wave ball (3rd stage), moon ball (5th stage) and the laser (9th stage). Even though the laser is the most powerful weapon, my favorite is the moon ball because of its built-in “crouching whip”: just duck and press the shot button once, and a short-range moving whip will materialize around you. It’s great for protection and powerful enough to take down all enemies. Magic can appear as foot wing (jump higher and fall slower), mirror (add a mirror image over Apollo’s head and double firepower) and typhoon (9 second invincibility). Foot wing and mirror disappear once Apollo takes three hits. Remember that it’s regularly possible to reach higher platforms by pressing ↑ at the same time you jump.

Every life comes with a health bar, and the game starts with a stock of 50 E-balls. E-ball is the currency/money used to buy items. Defeated enemies release E-balls for immediate pick-up, as well as L items for health recovery. Health is automatically restored before a boss fight and maximum health is increased right afterwards, when a new cyborg rider is boarded. By the end of the game that health gauge is completely full. As for money, it’s possible to get it faster by playing the mini-games found in some of the floating or the ground doors (press ↑ to enter). The doors also allow the hero to interact with other characters, which include fairies giving warnings, generous people who will give away magic, new weapons or money, a weapons/magic dealer, a healer frog, a lady that charges 40 E-balls to power-up your weapon and a useless information seller (he never got a dime from me). The mini-games can be a bet, a chest draw or a challenge to beat an enemy in order to free a captive lady/fairy (the girl in the hot tub is one of the greatest sights in the game). Now for a little trick: every time you go into a door with a luck game or a new weapon, return to it again to play the game one more time or to have said weapon powered up (you only power up once).

Compared to the platforming areas, the shmup parts are much more straightforward. During the odd stage interludes every section ends in two doors. One of them will lead to the next room, the other will loop Apollo back. Collect S for speed-ups and P to increase power. Every cyborg rider has its own weapon features, evolving either into a spread pattern, a 45º auxiliary shot, an additional rear shot or a plain upgrade in the forward shot. All shmup parts are self-contained, so you always have to power up again once a new section starts.

Xexyz is heavier on the platform side, but that happens only because that’s where the real challenge lies. Other than those dreadful pits, finding the hidden star in the scenery in order to reveal the gate to the demon was the most demanding thing to do. Fortunately there’s only five of these in the whole game. Every stage adds new enemies to the previous gallery and subtle graphical details are pretty cool, such as the way Apollo changes color according to the weapon he’s wielding. Pit deaths and random items from killed enemies reminded me of the Mega Man series, and the round blocks in stage 5 seem to have been taken out directly from Alex Kidd in Miracle World. Shmup sections are very easy, and with rare exceptions so are the bosses, huge creatures with easily foreseeable patterns (that cheap shark got me once). Some of the brightest and coolest graphics appear in the shmup parts, and while flicker does kick in (mainly during boss fights) it’s never that much of a problem. I only experienced slowdown with the moon ball weapon during busy platform parts.

An extra life will be granted every time you score 500.000 points, but you can only see the number of lives when you die or when a new stage starts. Even as an adventure game, I wish the disregard towards scoring wasn’t so pronounced in Xexyz. There’s no time limit anywhere, enemies respawn aplenty during the platform parts and the last glimpse you’ll ever have of your score is in your final conversation with the elder god prior to the fight against final boss Goruza. For such a fun little hybrid it’s not such a letdown, but it’s obvious that taking the score system for granted is a sad, sad loss. As with any other game, a minimum concern with score would have boosted replay value way beyond the simple ideas of fun and amusement. And although not bad at all, the lack of variation in the musical score makes it sound as if the same tunes are playing over and over.

Once Goruza is dead you’re presented with a final showdown against the enemy’s base, in a Galaxy Force fashion. The aiming reticle is extremely awkward but it’s not a tough battle by any means, and the ending gives a nice closure to the game - remember Apollo’s real motivation! Below is my score before I entered the chamber to fight evil Goruza, playing with a turbo controller. 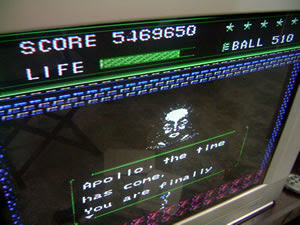