Back in 1990/91 I was 14/15 years old, and the crushing majority of Mega Drive games that appeared on rental shelves close to my place were awful-looking pirate copies, with the exception of a few titles from Japan such as Jewel Master and Darwin 4081. You could find originals of them everywhere, and I remember I really liked the texture of the Japanese boxes, which were a bit different and smooth on the tips of my fingers. However, in the presence of stuff like Sonic the Hedgehog and Streets of Rage these games were promptly ignored, especially Darwin 4081, which by that time was already considered by the kids around the block as run-of-the-mill material, unworthy of our precious time. Ah, kids...

Indeed, explicit technical highlights aren't to be found anywhere in this game, a port of Data East's arcade title Super Real Darwin, which in turn is the sequel to Darwin 4078. I think the name change was supposed to include the Mega Drive version in a series that eventually fell into the realm of the obscure. Despite its lack of punch and the somewhat generic graphical style, Darwin 4081 shouldn't be taken as a failure - if it sounds unimpressive, the arcade source is to blame. Sega did a very good job with the port, preserving the graphic quality, downscaling the difficulty and even improving the music, which is more varied than the arcade version. The excellence of the porting process is also hinted by the absolute lack of slowdown, something that very few 16-bit shmups were really capable of achieving (other notable mentions are Gleylancer and Wings of Wor). 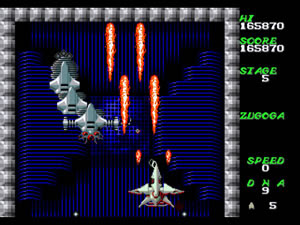 Darwinism and sci-fi are actually very close to each other as a wealthy foundation for artistic creations, and this connection is what drives the gameplay in Darwin 4081. The ship evolves as the player collects the so-called E-evol power-ups. These items are released by specific enemies, each evolution leap comes with a new main weapon and a visible change in the ship's sprites and the more you evolve the bigger the ship's hitbox gets. A secondary and rarer power-up called B-evol will apply a special upgrade that changes the ship into a whole new form depending on which evolution phase was originally active. Further evolution phases beyond the starting one are time-dependent, so if you do not take another E-evol item in a certain amount of time your ship will devolve one phase. Getting hit while evolved will send the ship to its weakest and most basic form, and any damage in this condition (or in the +1 starting phase) means death and restart at a previous checkpoint.

Building upon the classic ideas of Xevious, basic gameplay in Darwin 4081 is comprised of a main weapon and a secondary shot to care of ground enemies. This ground shot does not change, what evolves is only the main firepower. Extra items consist of speed-ups (S) and 1-hit shields (Ar). Just like power-ups they are always released by the same enemies, so after a while it gets easier to spot where they're coming from. They will wander off pretty quickly, and if you're not fast enough you'll lose them. Actual speed is indicated to the right, and its maximum value is 3. This happens because speed-up items cease to appear once you get the third one. There's no need to refrain from taking speed-ups since the maximum speed doesn't feel too fast and is actually quite useful against a few bosses.

Some players hate checkpoints in shooters, and the good news is that this game lets you power up instantly when you die. In order to do that you must collect DNA left from special ground enemies such as worms and lizards. Each DNA is worth 300 points and adds one evolution phase to your form as soon as you respawn after dying. If you manage to stock the maximum value of 9 DNAs you'll be boosted up to the second-to-last upgrade (the flame shot).

Graphics in Darwin 4081 aren't anything special. There are no special effects, no parallax and no huge explosions. However, one of the levels is quite remarkable for letting you fly over a landscape full of circuit boards and microchips that come to life all of a sudden. The music is decent but the sound design is definitely the standout, with specific sounds for each weapon and a rich set of the most varied sound effects. The game flows smoothly and keeps you on your toes without being too taxing, and with one glaring exception the stage structure is always the same. This exception is in stage 6: it has just one checkpoint (die in the boss and get back to the start of the level) and comes with the hardest boss in the whole game. The only way to hit him is with ground shots, and it's no easy task at all. In fact, this particular part of the game represents an odd peak of unbalance, especially when you consider the fact that most bosses are a joke if you reach them with full power. Sometimes they will die in less than 2 seconds!

Besides a justified albeit not too severe complaint on bullet visibility, other game aspects also contribute to impair enjoyment in Darwin 4081. I absolutely loathe the B-evol power-ups. The first bad thing about them is that it's really hard to distinguish these unwanted "offers" from the regular E-evol items, and I always end up taking one by mistake. The second bad thing is that they're mostly useless, giving the player more trouble than actually helping... Even the dragon that shows up in the start screen isn't worth a damn, and I curse the game whenever I activate that spider-like form that spits bubbles. If you manage to survive with one of these crappy weapons you get sent back to the weakest regular form once its lifetime expires, not really the best way out of an already awkward situation.

Getting past all of these little annoyances isn't really necessary to enjoy Darwin 4081. The interesting upgrade scheme with over 15 different ships/weapons makes it fun, and the fast paced action is sure to please those who always thought Xevious was too slow to begin with. The game is also very generous on the extends, which are given every time you score 50.000 points. A useful gameplay advice is to remain in the bottom of the screen when ground enemies start becoming more aggressive. They will all stop shooting once they've scrolled 2/3 of the screen, and that makes it easier to take them out if you're patient enough.

Since the starting difficulty setting is EASY, I went to the options screen and switched it to NORMAL in order to play the game. I'm not ashamed to say that I exploited stage 6 for a higher 1CC score, dying at the boss multiple times to capitalize on my life stock. Some missed opportunities didn't allow me to get a higher figure, but this one isn't too shabby either. 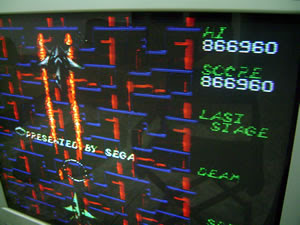 Note: this text was cross-posted with minor changes on Sega-16.
Posted by Edward at 8:01 PM