Although it’s perfectly fine to give up on a game you’re trying to 1CC, avoiding the feeling of personal failure isn’t easy. This is mostly related to the fact that we try to bite more than we can chew, and for some time now I believe the best way to deal with it is to step away for a while. I can’t stress this enough, but I’m into the hobby for fun and amusement, and continued sessions in a game that’s destroying the player aren’t healthy at all. Plateaus should be respected as an alert that you either need help or that you need to get better as a player (let’s not even talk about burnouts). For me Shienryu is an example of a successful comeback from one such moment.

About a year ago I was trying to play Geki-oh - Shooting King, Shienryu’s incarnation on the Playstation. It didn’t take long to reach a point where the game became impossible, I wasn’t even able to get past the fifth stage. Fast forward to STGT 2011 and the week I spent swearing at my laptop while playing Daioh, Shienryu’s spiritual prequel. I had the same issues and gave up halfway the competition, afraid of eventually throwing the computer out the window. According to some modern lines of thought it’s a given fact that the universe conspires to your advantage if you’re surrounded by positive stimuli, so here I am fulfilling something I set out to do more than a year ago. Granted, it’s in a different system but possibly the best option if you have to play it on a home console.

Shienryu was developed by some of the same people who worked on the arcade shooter Daioh. Both games share a lot of similarities, including one of the most punishing rank systems I have ever seen. Their main inspiration is Raiden, so if you’re into Seibu Kaihatsu’s classic you’ll most probably enjoy Shienryu as I did, provided you follow some very basic rules. 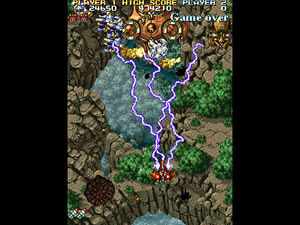 The power of thunder and lightning

One of the similarities with Raiden is in the stage structure, where the first four levels take place on Earth and the last four in outer space. Graphically the game is great, with good variety, fragments flying off destroyed enemies and bosses full of multiple parts that can be taken off one by one. Ship designs are similar, but fortunately in Shienryu you can abandon the sluggish initial speed of the ship by taking speed-ups. Three weapons can be used and switched with colored icons: red evolves from a forward single shot to a vulcan spread pattern, yellow equips the ship with a mixed set of straight and homing missiles and blue activates a lightning discharge that homes on everything that takes damage. Take P items to power up and B items to increase bomb stock. By the way, each weapon has its own bomb animation: red results in an energy beam that funnels from the sides to the front as it dissipates, yellow produces a localized blast and blue deploys a series of vertical laser bars aligned with the ship. All of them carry the ability to block bullets, but the red one is the best for panic purposes.

Checkpoints are implemented only during the stages themselves. With the exception of the last boss/stage, you respawn right where you die during boss fights. Also used in Taito's Gun Frontier, I think this is an interesting alternative for those people who hate checkpoints. Scoring devices appear as surplus power-ups, which are worth 5.000 points each, and end-of-stage bonuses for level completion, bomb stock and number of candles collected: some enemies will release these tiny items that look like candles, colored in red or blue (a few sources refer to them as LEDs, but they’re still candles to me). Each blue candle is equal to ten red candles, and the more of them you collect the higher the bonus.

Shienryu has a rank system that makes enemies shoot more bullets with increasingly faster speed as you make progress. Now for the crucial quirk: you can’t accept anything the game gives you that (1) nets you additional points or (2) gives you any extra protection. If you do take weapon items of the same color or power-ups in excess for those nice 5.000 points each you can expect a further difficulty increase that will never subside, not even when you die. In a similar fashion, you cannot take the rare pink power-up that gives you instant maximum power and puts a 1-hit shield on the ship’s nose (or splits into a plethora of other power-ups once touched). If you increase bomb stock beyond the initial three you will also be incurring in an irreversible rank boost. What’s the catch then? In order to keep the game manageable never collect any item that yields points once you reach maximum power, never have more than three bombs in stock and never, ever take the ultimate pink power-up. This last point is very important because once the pink power-up disappears natural rank will be reduced by a good margin. No worries on candles, they do not add to the rank logic at all.

By following the above recommendations Shienryu goes from a freakin' nightmare to a really enjoyable game, with fair bullet patterns and no walls of any kind. Provided you don't take repeated items it's possible to mess with the weapons at will, and eventually I chose the lightning (blue) for the first half of the game and the vulcan (red) for the second half. The missile (yellow) is nice to look at, but it's quite unreliable in that there's always one enemy that emerges from the firespray armed with a deadly bullet. Lightning is the weakest of all weapons, but it's actually the best one for scoring because it will take down anything in front and behind the ship, also netting more points by damaging larger enemies.

Music in this game starts out pretty corny, but it does get better as you play later stages. Even though it never reaches bullet hell status, at times Shienryu comes close to it because it's heavily bent towards twitch dodging. The last boss is one of the coolest I have ever seen in this respect. In one of his attacks the screen is forced to zoom out so that you can completely glance the epicness of the battle against a massively huge dragon robot. Another highlight is the 6th stage, which flows as a boss rush with at least four large spaceships to be destroyed before you face an skeleton-like mecha boss. It's pretty cool stuff and a testament to good game design. The crab enemy in the boss rush is the only one that will always give away an extra life (1UP). Other 1UPs (or 2UPs if you're lucky) can appear randomly, with score-based extends achieved at 1.5 million points and then for every 2 million afterwards.

The Saturn port is the superior choice for everyone since it comes with save functionality and an option for TATE mode + pad rotating. Moreover, it's virtually free of the slowdown that appears in the PS1 version. Shienryu is also present in a double pack along with its sequel in The Shooting - Double Shienryu for the PS2, and it's interesting to note that in the European release the game was renamed as Steel Dragon.

Props go to fellow shmupper Battletoad for enlightening my journey with a great post about Daioh on his blog. As pictured below, in my best credit I managed to reach stage 2-6 (NORMAL): 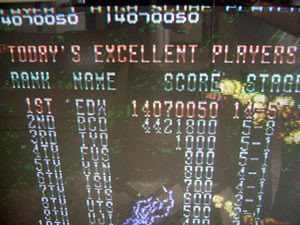