I love the name of this game, it rolls off the tongue nicely despite its impossible phonetical self. And I don't know why exactly, it gives me this fuzzy feeling related to freezing, ice-cream and food. It's one of the least known games published by Irem, and it's relatively obscure within any gaming community, probably due to the US NES release being outrageously expensive. I wouldn't say it's rare, unless we're talking about complete copies.

Sqoon is as much a natural evolution of Activision's Atari 2600 classic Seaquest as a predecessor to Irem's own In the Hunt. All these games have one thing in common: the fact that you control submarines in a shmup setting. In Sqoon the backdrop to the action involves aliens from Neptune raiding a submerged planet Earth in search of humans, which are imprisoned and used as livestock for their nutrition (the documentation refers to them as "man-ham"). The only hope for mankind is this pink submarine, whose captain is supposed to be a rogue pirate or something. And even though the game takes place completely underwater and features lots of marine enemies it's not nearly close in gameplay to anything related such as Darius, Submarine Attack or Deep Blue.

Each stage is a sunken city, and my guess is that some huge cataclysmic event must have happened to the planet because there's no separation at all between them - you just navigate from one city to the next with no interlude whatsoever. It all starts in Hawaii, then proceeds to China, India, Egypt, Greece, England, the North Pole and New York. Frankly, the graphics don't do much to help you distinguish the places, and with so much going on chances are you probably won't pay attention anyway. 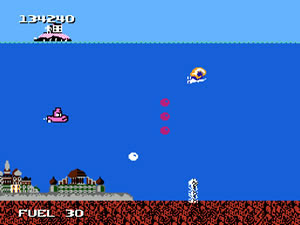 A submerged India overruled by Neptunians

Being developed in the mid-80's, Sqoon was influenced by all the ideas that were still boiling in the shooting gaming scene, not all of them acceptable in the shmupping world of today. Besides shooting and rescuing human hostages, it's also necessary to manage fuel. The fuel concept makes the game really busy, and forces the player to devise some sort of strategy to survive in the long run.

There are two types of attack, the regular shot (button A) and the ice ball (button B) that goes down in an angle of approximately 45º. Fuel for the submarine lasts approximately 60 seconds and goes down in steps of 10, blinking fast when the reserve is about to run out - if this happens you lose a life. To get more fuel you must do three things: (1) rescue at least one hostage, (2) hit the pink crab with the ice ball and take the golden fuel cell from it and (3) approach the surface ship that appears once you've rescued the hostage and taken the cell. The surface ship will then drop a bubble that refills the fuel. The trickiest part in this process is the pink crab, which doesn't come by very often and allows only a brief time window for you to get its fuel cell. If you take too long to get it you might die because the crab will reappear in its place without notice.

Hostages are freed by hitting their bunkers with the ice ball. They're easily spotted in the scenery, but once the hostages come out they might be taken and eaten by the tiny orcas that swim around. These sharks are harmless to the submarine, so the only danger they really pose is eating all of the desperate humans before you're able to rescue them. The rest of the enemy gallery (shrimp, squid, turtles, mines, drills and all sorts of different fish) is hazardous and sometimes arrives in very crazy patterns, taking you off-guard with a series of sudden moves. In Sqoon there are no bullets fired from enemies, they're the bullets themselves.

Another instance where you can have the surface ship appear besides exchanging one hostage for one fuel bubble is after you rescue 9 hostages. Dock with the ship, keep pressing the fire button to deliver the hostages and a power-up will drop, upgrading the regular shot and renewing fuel supply at the same time. There are two upgrade levels, and in the final one you get a spread shot that's great to take down multiple enemies. Dying will downgrade one power level. You have to memorize how many hostages you have rescued because it's not shown anywhere in the screen, nor is the number of lives left. To increase speed just power up or hit the + signs that move back and forth over some of the large underwater bases.

Dude, why didn't you take the gold from the crab to refuel?
(courtesy of YouTube user nenriki86)

Starting from the 2nd stage the screen halts so that you have the chance to destroy the weak point of the boss base. As far as enemy formations go, the second half of the game (stages 5 to 8) is basically a slightly harder repetition of the first half with swapped color palette. Despite the primitive look, flat colors and tiny sprites, Sqoon is still a graphically charming game that hits a perfect point when you nail down the gameplay, especially how to preserve fuel (don't refuel if you don't have to, the surface ship will not go away unless you approach it). However, the game does get repetitive quickly afterwards, with no actual increase in difficulty during the second loop. On top of that there is only one tune that plays over and over, with brief interlude music between stages. Heavy slowdown happens briefly when you have the spread shot and there are too many fast enemies on screen.

Some advice to better enjoy Sqoon: don't be too close to the left when you resurface to refuel, sometimes the fuel bubble or the power-up will be unreachable when it falls; the only way to destroy mines is with the ice ball; be on the lookout for extra lives (the cross at the church in the first level and all kinds of weird objects such as a panda, smiley faces, sea tokens and even a surfer on the top of the screen); hit the snail that appears once the level starts for more points; after a few shots the snail will turn into a necklace, so stop shooting and take it for an extra life; if you keep shooting the snail will reappear, and if you manage to get the necklace again you'll get more than one life from it; don't lower your guard though, getting more lives is cool but it's just as easy to lose them in a snap; if you have a turbo controller use it, the game has no built-in autofire.

When I looped the game I thought things would collapse fast, but it didn't happen. In the run below I moved along and things fell apart from boredom in stage 2-7. I'm sure it wouldn't be like this if Irem had been the developer. With no real prestige in the shmup scene, Home Data's only other contributions to the genre are the obscure rail shooters Cosmic Epsilon and Tetrastar The Fighter, released only for the Famicom in Japan. 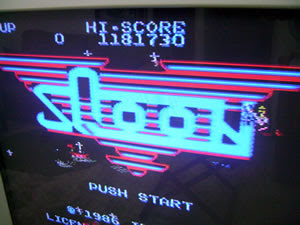