P-47 - The Freedom Fighter is a port of the arcade game P-47 - The Phantom Fighter. In the realm of shooting games with a World War II theme this one isn’t as well remembered as US AAF Mustang (Fire Mustang on the Mega Drive), which came afterwards and practically eclipsed Jaleco’s earlier effort. The PC Engine version isn’t that faithful to the arcade but still manages to retain its main aspects, at least in a way that makes it recognizable as a legitimate port. Though not in the same league of Fire Mustang or UN Squadron, P-47’s obscure arcade origin is what ultimately puts it above similar PC Engine offerings such as Power Gate and Hawk F-123.

According to Wikipedia, the P-47 Thunderbolt was one of the main US Army Air Forces fighters of World War II, and served with other Allied air forces such as France, the UK and the USSR. Mexican and Brazilian squadrons fighting alongside the US were equipped with the P-47. I don’t know if I would’ve played it with more enthusiasm if I knew this beforehand, but the game is decent fun regardless. It doesn’t have any sort of smart bombs so the player must rely exclusively on his/her skills and the assortment of special weapons provided. There are no power-ups available for the main gun, therefore gameplay emphasis is completely shifted to these special weapons and how they work. 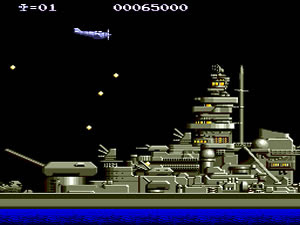 Yamato unleashes its fury in the middle of the night

Items are released by small helicopters or by hitting secret spots during the large battleship stages (4th/8th). These can be speed-ups (S), extra lives (1UP), continues (C) or any of four special weapons: radial blast (E), downward shards (T), air-to-ground bombs (B) or straight missiles (M). Each special weapon can be powered up three times if you stick to the same item, while dying will power it down one level. Missiles and shards have natural autofire, but the same doesn't happen to the ground bombs. And since the autofire for the main gun isn't enough to take care of all enemies during busy parts, activating the turbo function for both buttons (if available) is quite welcome.

P-47 is colorful and boasts some decent parallax effects. The sound design puts the regular stock of PC Engine explosions against a set of easily forgettable tunes. While the action is severely lacking during the first couple of stages it picks up nicely by the time you reach stage 4 and have to deal with a large battleship full of turrets and deadly cannons. From that point on the game starts demanding some memorization and a speck of strategy to be properly won. Nazi planes arrive in larger numbers and overlap their attacks with tanks coming from both sides of the screen. Some special weapons work better in certain situations, even the apparently useless shard shot that shifts direction briefly as you move and rests at a downward 45º angle (T) has good use in later stages. In fact, picking up the wrong special weapon for any given section can make the game a bit harder since enemies start mounting like flies, at times incurring in a little harmless slowdown. It doesn’t happen often, but bullet count can overwhelm the player if a few selected enemy flocks aren’t taken down fast.

Even though there is enough substance to keep both PC Engine and old school shooter fans interested, P-47 is a bit lazy for repeating the 4th stage with only a color swap in order to turn it into a night raid. It’s not shown anywhere, but every group of two stages is supposed to take place in a different location around the world. All enemies are at the service of the Third Reich.

Despite being obviously easier than the original arcade game the PC Engine version is still enjoyable in its own terms. There are no intricacies with scoring, no item or power-up bonuses to be found and no secrets to be unveiled. The constant supply of 1UPs is completely absent in the second half of the game so it becomes important to preserve as many lives as you can if you want to survive the onslaught of the fight against the last battleship. The C item is very precious while learning the game and practicing because it provides one more continue to be used besides the initial two you're given when starting a credit.

Unfortunately P-47 - The Freedom Fighter is also one of those annoying shooters with no high score buffering and no possibility of pausing right after a boss dies. The end credits halt at a still of your plane and soon you realize the only way to see it gone is by resetting the game (RUN + SELECT). The picture below was a lucky one, and the 1CC was achieved with the turbo function activated. 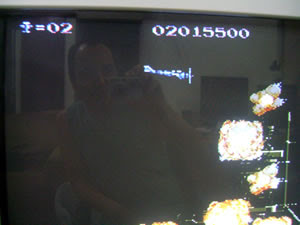