One of the latest games released for the Dreamcast and also one of the most beautiful designs ever conceived in the shooter genre, Under Defeat saw the light of day in 2005. Back then it was remarkable for swimming against the tide of the bullet hell style, as it brought old school shooting back to the spotlight for a brief while. When I played it for the first time I never imagined how much of a beast this game really is, in every technical aspect you can think of. I often think of myself as being in the middle of the 1CC × score debate, but the urge to perform as best as I can always takes me over when a game like Under Defeat falls under my radar. Playing just for survival doesn't cut it.

Being taught the meaning of defeat is rarely as much fun as it is while playing this game (the joke is irresistible but it's actually quite true). Once I got sucked into Under Defeat's pace and mechanics it was hard to let go. Beautiful graphics, simple yet addictive gameplay and an excellent presentation makes it an outstanding title that's often compared with Psikyo's Zero Gunner 2, the other staple helicopter shmup available for the Dreamcast. Both are excellent and very different in their core, that's why I feel any opinion will lean towards personal taste instead of pure technical achievements. Zero Gunner 2 is more over-the-top in its colorful design, while Under Defeat sticks to a grayish palette and more realistic compositions.

One of the trademarks of Under Defeat is the bullet sprite fired by enemies, a single thin shot used in several deadly and organic formations. "Organic" is my way of seeing how these bullets are generated (based on rank) and how random certain gameplay aspects turn out depending on your performance. And much like in Rayforce the ground shots seem to have a life of their own, taking some time to reach your altitude. With the slight tilting applied to the vertical axis this leads to a unique style that's pleasing to the eye but at the same time extremely deceiving: death comes with a crushing explosion that seems to freeze the screen for a split second, and when I learned the game had absolutely no extends or 1UPs I realized that the word "difficult" had found a new home. 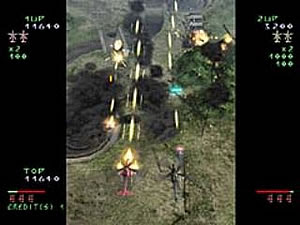 There are no upgrades available for the main weapon. What you're allowed to manage is the type of special weapon currently in use: vulcan (yellow), cannon (green) and rocket (blue). Certain enemies release items that bounce around the screen cycling through these colors and also red (extra bomb). Upon starting the game you need to choose between Normal or Reverse control for the helicopter inclination, which is adjusted by moving left or right as you refrain from shooting. The act of shooting locks the helicopter in place, allowing the player to strafe safely while the fire button is kept pressed.

Unlike the main gun, special weapons work in a different manner. When a special weapon is deployed it fires automatically until its ammo is depleted, recharging right afterwards provided you stop shooting. Vulcan is the weakest and recharges faster, rocket is the most powerful and takes longer to recharge. Special weapons will initially lock onto the target that's closer to a tiny red crosshair in front of the chopper, and it takes a bit of practice to aim correctly. While rocket is a one-shot attack, vulcan and cannon will automatically chase the closest enemy around the screen towards the direction of the helicopter once their initial target is destroyed. Destruction caused by vulcan and cannon is localized, whereas hitting something with the rocket results in an explosion that's capable of hitting everything in a wider radius. All enemies killed with a special weapon have their base values doubled (multipliers appear briefly under the score display) - this is one of the keys to score higher, and the main reason why rocket is the best special weapon overall. Another nod to the superiority of the rocket is that hitting more powerful enemies till they barely break and then using the rocket to make an adjacent kill allows the destruction of multiple foes at once. On top of that, every single shot landed on something is also worth some points.

A score bonus is awarded when a stage is completed, based on time left during the boss fight, bomb stock and contribution %, which is close to but not really the same as destruction ratio. Not all enemies need to be destroyed, but losing one of the essential ones won't let you net that precious 100% contribution number. Crush all major turrets and watch out for the tanks that shoot three bullets in a row (the ones with a slightly different color). Do not kill them by bombing. Beating a stage with 100% adds a ×2 multiplier to the contribution bonus, which is then multiplied by the number of times you died (!). How do you feel about suiciding for the chance of getting a higher score?

Attention to detail is what makes Under Defeat a real gem. This goes both ways, in that the player must refine his/her gameplay to the standards set by the game. In other words, the more you advance the more important a good strategy becomes. Death awaits in every corner, often ruining a perfectly planned run due to the slightest mistake imaginable. Some of the most frustrating things are running into a stray bullet or missing the target with the rocket. This last one spoils the strategy completely, either incurring in risky moves to get things back together or in the use of a bomb. However, getting a 100% contribution ratio based on a well-executed plan is a wonderful payoff. It makes you feel powerful in a way very few other shmups are capable of. The fact that the pilots are fragile girls speaking German is nothing but the apex of a non-loli teasing contrast.

Under Defeat is loopable, but the second loop is only activated if the player gets a contribution average of at least 95% over all five stages. In a rather unique twist, besides being a lot harder the second loop also has mirrored levels and a less grayish color palette, leaning towards green fields and sunset shades. Once the first loop is beaten you unlock a start option for the second loop on the main menu.

Of all graphical goodness the one that stands out the most is definitely the smoke effect. Bunkers, tanks, battleships, surveillance towers, helicopters and turrets of all shapes and sizes go out in clouds of debris and beautifully rendered smoke. But graphical polish isn't the only thing G.rev nailed in the head while developing the game. The soundtrack might not be that great when listened out of context, but it fits the game like a marriage made in heaven. The Dreamcast port is what every hardcore shmupper desires: several screen resolutions available at the press of a button (R), an outstanding practice mode that breaks stages down to 8 sections and allows rank adjustments in steps of -10 to +10, information on play time and the ability to watch and record replays of individual stages in practice mode. Even the VMU is made useful by showing the current contribution percentage (you'll know if you screwed up before the stage ends). With the addition of a gallery mode, arranged BGM and limited credits that eventually evolve to free play, Under Defeat for the Dreamcast ends up being one of the most complete porting jobs I've ever seen. Some of the extras have to be unlocked, but there are no stupid prerequisites whatsoever.

My copy of the game is the limited edition, the one that comes with a CD of the arranged soundtrack. In my best run I looped the game with 100% contribution on all levels except one: after so much practice I still don't know why sometimes I can't reach 100% contribution on the 3rd stage. I reached stage 2-3 on NORMAL difficulty with Normal controls, red helicopter side (player 1). 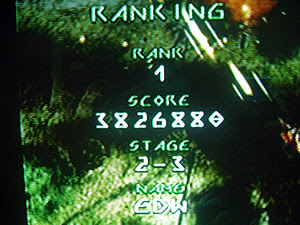