I always wondered who that grandpa in the cover of the US version of Phalanx would be within the game. “Maybe he’s the pilot of the spaceship”, I once thought. A quick glance at the manual dismisses that and gives absolutely no clue of the elder’s presence in the artwork, so I conclude he should represent the people saved by the heroic efforts of the pilot that’s sent to a colonized planet to fight an alien race that’s possessing humans to fulfill their evil deeds. Grandpa’s probably playing a victory chant in the honor of the A-144 enforce fighter ship that’s taking to the skies in the background. Its codename is Phalanx and its mission is called Operation Climax.

Originally released for the Sharp X68000 computer in 1991, Phalanx found its way to the SNES one year later. A horizontal shooter with a rather imposing length, it drew inspiration from other titles to offer a wide variety of outer space environments. This is by far the most positive aspect of the game, in that every stage doesn’t feel like the previous one(s) at all. You can count on levels amidst clouds, levels over dead landscapes, organic and robotic caves, underwater passages, descents towards alien planets, a high speed scramble and a mandatory huge spaceship that needs to be blown up from the inside. There’s even a dark area ridden with outer space advertisement boards. At times the third stage will halt in a screen with three passageways between the rocks: each one of them will make the level unfold in a different manner (take the upper one twice for an extra high speed challenge).

Phalanx isn’t aesthetically outstanding but it’s not lacking either. While the graphics do not exhibit any outrageously shiny effects (mode 7 is reserved to the intro and end-of-stage stats only), the parallax in a few levels is nicely done and the overall amount of details and color is quite pleasing to the eye (the ship changes sprites as it cycles weapons). On the other hand visibility can be an issue for some people due to the reduced size of most enemy bullets. Slowdown is a constant gameplay companion especially on bosses, but the interesting thing about it is that it’s not abrupt or jerky at all. It’s as if the developer had either deliberately applied slowdown (like in modern danmaku shooters) or adapted the game’s engine to the SNES well-known slower processor in order to obtain controlled slowdown. In any case, the result isn’t gamebreaking but does make the game easier. 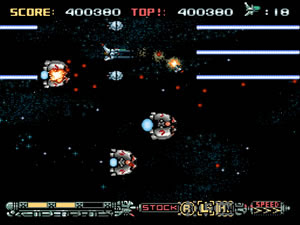 There are two types of weapon items, one for the main shot and another for missiles, all of them being designed by letters. Three types of missiles can be used according to A (homing), B (straight) and C (guided, follows ship movement). Shot types appear as L (laser), H (homing/hunter), E (energy charge) and R (ricochet). The P capsule is the power-up that upgrades one level of the main shot and refills one cell of the energy meter of the spaceship. A life is lost only when all three health cells are depleted. It’s quite clear that this health bar is a concession that takes away the pressure of the 1-hit death, but there’s a counterpoint to that. Depending on how you stand when you eventually die the ship will be too underpowered and the game suddenly becomes a painful chore.

Controls use four buttons: shot (A), speed selection (R), weapon selection (X) and special attack (B). There are three speed settings, and all of them are equally useful. Once more than one weapon is acquired choose the one you want to use with X (missiles aren’t selectable and are normally fired with the regular shot). Triggering a special attack unleashes a brief stronger attack animation for the weapon currently in use, sacrificing it in the process. The weapon is then gone and no longer available.

Everything is fine with Phalanx’s weapon system until you have to stock more than three weapons. The awkward weapon stock rule isn’t that complicated, but unless you have extreme familiarity with the game it leads to constant error in the heat of the battle. Take note: with three weapons already in stock, taking a fourth one will make the leftmost weapon in display disappear. It works as a FIFO stack (first in/first out), so in order to preserve the oldest weapon acquired you need to get rid of one of the others before taking any new weapon. That’s when the sacrificial special attack comes in handy. Since these special attacks are mostly useless they serve no other practical purpose, and it’s just ironic that the most powerful special attack comes from the most useless weapon, the energy charge (E).

All this talk about preserving weapons is just to justify the most important advice for those who want to play Phalanx: under any circumstance don’t lose the laser (L). If you’re on your last energy bit and you’re about to die select any other weapon, for the only weapon you lose when you die is the one that’s currently active. Dying will strip you down to almost no firepower and can be pretty tragic during boss fights, thus making the game even longer than it already is. My approach was to get laser, homing and ricochet and stick to them for the whole game, avoiding any other incoming weapon offers. Laser has rear shots in full power and will pierce through anything, inflicting double damage if you align at least two of its streams over the enemy. Homing is great for popcorn stuff and ricochet is the best at point blank distance. As for missiles, my favorite type is the homing (A).

There are slight design unbalances throughout the game (length/difficulty of boss or mid-boss fights), but they are completely overshadowed by the fact that you’re doomed if you die. Therefore it’s no surprise that the game gives away extends as if they were cheap candy. The first one comes with 10.000, the second with 30.000 and then there’s another one for every 30.000 points afterwards. The less you die the better it is for scoring because extra lives and credits are converted into substantial bonuses upon game completion, which are also influenced by difficulty. The hidden sections in stages 2 and 8 don't contain much in the way of scoring, but they’re a nice addition for those who dig finding secrets. That last one with the girl is a bit bizarre!

Almost all levels in Phalanx seem to last longer than the average for a 16-bit shooter, some of them have up to two mid-bosses and the forced delays in between stages (loading?) are totally uncalled for. However, people who are keen on longer shooter campaigns generally consider Phalanx to be a fun game. It was a bit too long for my taste, but nonetheless it’s a worthy entry in the SNES shmup library. I personally liked the way the game often makes the player move around the whole screen in order to survive, even when you’re fully powered. The soundtrack does its job, with the highlight definitely being the BGM for the last stage. Despite never having received any sequel, Phalanx was recently honored with a makeover in a WiiWare version. It also appeared with less stages under the name Tiny Phalanx, a hidden game within the obscure Playstation brawler Zero Divide, also developed by Zoom Inc.

I played on NORMAL and finished the game on one life with the result shown below. I chose the middle path in stage 3 and didn't get into any of the hidden areas. Note: the starting difficulty is EASY. 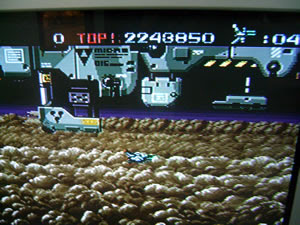