Some of the most intriguing shooting games are those of the versus kind. The Senko No Ronde series is today's most recognizable take on the formula, but since Space War started it on the outset of the genre other games also contributed in bringing something new to this rather obscure table. One of the most popular titles in Japan was Twinkle Star Sprites, a vertical shooter that was born on the Neo Geo and received several ports across multiple platforms over the following years. Even within the most dedicated shmup community it never had much of a fanbase outside of Japan, and having played it for a couple of weeks now I can understand why. Just like the latest iteration of Street Fighter, Twinkle Star Sprites is aimed at versus combat and that's where the whole fun and the real juice of the game lies. On the other hand, the solo campaign is nothing more than a feeble and easy accomplishment marred by an unpredictable AI.

In Twinkle Star Sprites a roster of cartoony characters battle over colorful backgrounds of pastel shades and cute surroundings in a split-screen setting. The Saturn port includes the original arcade game with all the slowdown intact and also an exclusive "Sega Saturn" version. Both versions include three modes of play: in Story mode you play as Load Ran, the blonde heroine; in Character mode you can choose from any of the 10 regular characters to tackle the game's seven stages; in Versus mode two people battle each other to see who's best. Story and Character modes are the same and even share the same high score table, the only difference is that Load Ran (misspelled as Load Run in the Saturn version) gets more detailed cut scenes in Story mode. Since I couldn't find anyone willing to learn and play it with me on Versus mode my time with the game was spent mostly on the arcade game's Character mode.

From the quick rounds I had at the Sega Saturn version it plays just like the original arcade game with minor gameplay differences, a few graphical enhancements and fully voiced extra cut scenes thrown in, as well as considerably reduced slowdown. That alone makes this version a lot harder than the arcade original. The nicest addition is that in Character mode it's possible to choose all bosses from the start (arcade version requires a button code). Saturn version also has an exclusive new character called Meirin, a Chinese girl who rides a panda and shoots colored chalks. 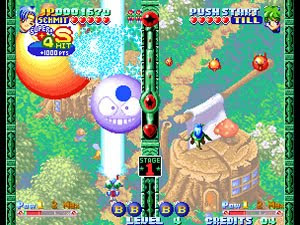 Arthur Schmitt under pressure from one of Realy Till's special attacks

Two buttons are used to control the character: a shot button and a bomb button (the Saturn port also offers a very handy autofire button that overrides the regular shot button). Gameplay basics involve killing waves of incoming objects so that fireballs and special attacks get sent to the other side of the screen to create mayhem and consequently hit the opponent. As a rule of thumb, a destroyed object creates a localized explosion and each explosion creates another explosion if an object or a fireball is close enough, with successive explosions resulting in a chain/combo. Every stage has a specific type of object (birds, clams, snowmen, chests, stars, etc.) which might require more or less shots to be destroyed depending on their color (purple > blue > green > yellow > red). Therefore, careful shooting is important to weaken stronger waves and prepare them to be obliterated at once or in succession for longer chains (the color changes according to the inflicted damage). Sometimes objects arrive with shields, which must first be destroyed before you can actually make the kill. The longer the chain the higher the number of fireballs sent to the other side. Reflecting fireballs in succession can generate special attacks like the ones achieved with charged shots.

The better you play the faster a three-stage charge gauge fills up. Level 2 charge shots that hit something will produce special attacks on the opponent's side, small creatures that behave according to the chosen character. Level 3 (MAX) charge shots will generate boss attacks, which are larger creatures with several attack patterns that flee if the opponent isn't able to destroy them. Charging time varies from character to character and often expose the player to more danger because it halts shooting. Fortunately creating special attacks and boss attacks is also possible by chaining and reflecting multiple fireballs back to the opponent. Because of this I rarely used the charge shot. I would only do it if I was attacked by a boss, so that my first hit could be a level 2 or MAX charge blast on its nose.

Bombing works like in all standard shooters: use them to escape when you're about to get hit. Getting hit by an object takes away one heart from the player's health, while an opponent's blow depletes three hearts. If the player collides with an object he/she is "stunned" and frozen for a brief while, at the mercy of further enemy attacks (bombs don't work when stunned). After recovering, the player is still impaired in speed and firepower for a few seconds. If the player is in his/her last heart object collision won't inflict any more damage, so the only way to die is by getting rammed by an attack from the opponent. Half of any lost health is immediately sent to fill up the opponent's health bar.

Whenever two exclamation signs appear one of two things might happen. If a glowing blue orb arrives within a formation, hit a nearby object to explode it and activate "fever" mode. While in fever you fire many more fireballs per explosion. If a flipping coin appears and starts bouncing against the edges you can either opt to take an extra bomb, a star or a score bonus. The star removes all shields from the present objects. The first $ sign is worth 10 points, and provided you catch all subsequent coins while showing the same $ sign they will grow in value to 100, 1.000 and 10.000 points. After that all next $ coins are worth 10.000 points, but missing just one coin or taking the extra bomb or the star will reset the next $ bonus to 10 points. This is the first and only hint for a concrete, actually doable scoring strategy. Exclamation signs (hence more fever and $ opportunities) appear faster the more efficient you are in your kills: get higher combos and kill object waves without wasting any shot, for which a message saying PERFECT will flash for a few seconds. If the fight drags on death will appear alternately for both players, getting stronger and descending increasingly faster until it touches one of them and executes and instant kill.

Everything about Twinkle Star Sprites is cool until you start playing it for score. The 1CC comes easily (on Arcade mode at least), but scoring higher is quite a tricky task. There is no consistency to the 1-player game, it's just too random and unpredictable to be tackled on methodically. In the first stages your opponent behaves like a retard, ramming into stuff and dying almost out of nowhere. Later on they seem to be on constant overdrive, speeding up their special attacks with almost no time for you to react. This is mostly true with Mevious and Memory, respectively the sixth and seventh (last) opponents. And even these last enemies wuss out sometimes, dying with ease when they should show more resistance. The only bonuses you get in a round are for maximum chain and time remaining, so there's no motivation to achieve a flawless victory or to speed kill the opponents. Therefore scoring higher happens when fights last longer and you reach the end without losing any round (losing a life). Extends are given for every 500.000 points, and remaining lives are worth 100.000 points each when the game is completed.

All characters are given grades for speed and power, ranging from 1 to 3. Some of them have stronger shots or charge shots. The efficiency of special sttacks and bosses is pretty much irrelevant when you're playing alone, so I won't comment on those. My character of choice was fluffy Nanja Monja because of its reasonably powerful shot, medium speed and, well, furball fluffiness. None of the slower characters were really my cup of tea, but other good choices to play were Load Ran and Tinker & Linker.

The Saturn port of Twinkle Star Sprites is an excellent package that includes a second CD with lots of extra material about the game, which by the way received a whole new intro in the Saturn version (besides the original one included in the Arcade mode). Character dialogue is all in Japanese, so it's a bit hard for Westerners to enjoy the story bits in all their humorous glory. Harmless loading times precede stages and cut scenes, voices and art come in typical Japanese anime style and the music is equally anime-charged. My favorites tunes are the ones that play in the 3rd and 4th stages.

I cleared the game on both versions in the default difficulty (4), but I spent most of the time with the arcade mode. Saturn mode was cleared with Meirin and Arcade mode with Nanja Monja, with the results shown below. 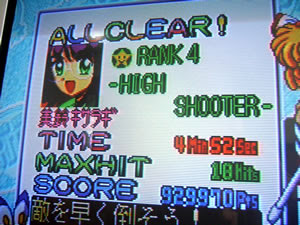 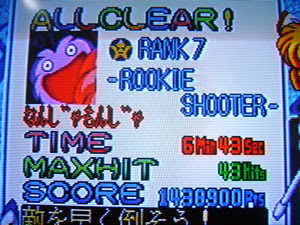