No home version of Heavy Unit was ever released outside of Japan, and in this case in particular probably for reasonable marketing reasons. The original arcade game seemed to be quite obscure, and both home versions aren't anything to write home about, technically speaking. The Mega Drive port is more beautiful all around, but the PC Engine version is more faithful to the source material. If that's any indication of port quality it's up to the player, but on graphical merits alone Heavy Unit for the PC Engine is a poor one. Most shmups that came out at about the same time look better. The good news for PC Engine lovers is that on gameplay merits it is the undeniable winner when compared to the Mega Drive version that was released later. It's harder and offers more action per square sprite on screen.

Heavy Unit is about a spaceship that's able to morph into a robot as if it were a legitimate Decepticon. There's nothing memorable about it, in fact it's rather unimpressive. There seemed to be a compromise to be met while keeping the game faithful to the arcade game, hence the tiny sprites and the lack of parallax. Considering the lack of graphical honey and how hard the first stage is when compared to the rest of the game, the entry ticket is a bit taxing if you're the kind of shmupper who digs eye candy and a few generous thrills from the get go. That's why first impressions about this port of Heavy Unit are often disastrous. It certainly takes a bit of endurance and good will to start seeing whatever positive experiences it might offer. 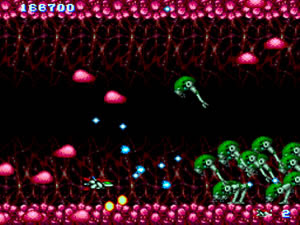 Cave worlds are pink and inhabited by robotic toads

Controls are simple: use one button to shoot the main weapon and another to shoot missiles. While in spaceship form you're able to shoot a spread pattern and drop missiles up and down. Once in robot form firepower consists of a more destructive narrow pattern and homing missiles. In order to increase their power it's necessary to take P power-ups left by selected enemies or by a small carrier that needs to be destroyed. Other items include speed-ups (S), extra lives (E), shields/barriers (B) and the much needed transforming icon (T). It's the T that triggers the transformation between spaceship and robot and vice-versa (it's not possible to switch at will).

Mixing the sci-fi theme with bio-creatures and devilish motifs is the main reason why the arcade game is visually interesting. However, the adaptation on the PC Engine port drags it down a good notch due to the resulting lifeless environments and washed out colors of certain sections. What's left for players to enjoy is pure straight gameplay, provided they are able to surpass the initial section with the large block and the serpent heads. Whereas the Mega Drive version lacks in action the PC Engine game excels with plenty of enemies to kill and a lot more bullets to dodge. Maybe in order to balance that the shield in this version is much more effective, sustaining a higher number of hits and even allowing the character to go through walls (something that's deadly on the Mega Drive port regardless of shield strength). A lot more maneuvering is needed to defeat bosses, as well as a few regular flocks of enemies.

One item that needs special consideration is the speed-up. The initially awful low speed of the ship is gone once you take the first speed-up, and every subsequent one doesn't seem to add much (or any) speed at all. Thought it might seem so from the first half of the game, ship's speed does reach dangerous levels by the time you go through the power-up rain of the fifth stage. Perhaps it takes ten S icons to see some actual increase in speed, but it eventually happens. Since every icon is worth 100 points the temptation to get them all is there for those who crave higher scores. The good news in this case is that the game loops in a higher difficulty and adds suicide bullets to a few enemies. Yes, you heard it right: suicide bullets in a 16-bit shmup! I guess most people don't expect this from such a poor-looking game, huh?

To be honest, the only thing that sets Heavy Unit apart from a shooter with NES standards is the decent lack of flicker or slowdown. I love those huge serpents that break down in pieces that bounce above the ground and the green toads jumping inside the bio-cave of the fourth stage. Although it's also severely downgraded the music is still amusing for the most part, an obvious merit of the original material. The starting difficulty is to blame for scaring most people away, but those who are able to get the shield item and beat at least the first level will certainly find the rest of the game reasonably balanced, even considering the checkpoint system. Choosing between the spaceship and the robot isn't such a big deal because the robot's not that large, especially when compared with the Mega Drive version.

There's a boss rush in the fifth stage, where you fight all bosses from the previous levels one after the other. In my best run I died on the fifth stage of the second loop, on the rematch against the 3rd boss. Game was played on NORMAL (to access difficulty selection press ←, button I and RUN). 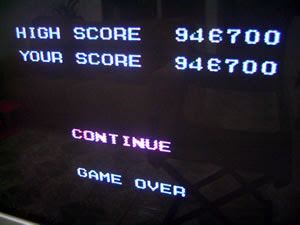