It came as a surprise to me that Over Horizon had a release outside of Japan, but on European shores only. I couldn't find much info on that one, but I assume it's just as obscure as the Japanese version. The Japanese cartridge is also a rare item, not often seen in auctions or retro game resellers. Developed by Hot-B, whose name I only associated with Mega Drive's Insector X, Over Horizon is an inventive horizontal shooter that clearly follows on the footsteps of the Gradius series while adding a few fresh concepts to the gameplay. As with many other shooters the title is somewhat cryptic because the whole game takes place in outer space environments. I guess a more suitable title would be "Beyond the Horizon" or something along those lines.

Check the resemblance both in the box cover and the game itself, the ship in this game reminds me of the ship from Toaplan's Zero Wing. That tiny and goofy ship would lend itself perfectly for a cute'em up, but this game has nothing of cute across six stages of well-crafted 8-bit shooting action. Vegetation ridden platfoms are followed by corridors with deadly turrets. Just before fire-breathing gargoyles appear ice blocks will need to be moved around so that you can safely pass, then a sewer-like factory will throw the ship around due to strong water currents. A mission outside and inside a huge spaceship leads you to the heart of evil in a final fight of cosmic proportions. Okay, you might take the cosmic part out of the sentence, but it's still impressive nonetheless. There isn't much in the way of color, the game's appeal is much more related to stage design and gameplay. 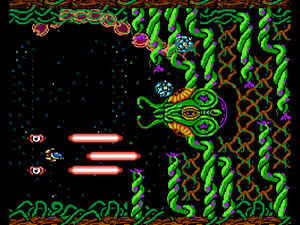 Power-ups emerge from these tiny capsules that appear from the right. Destroy them to take an option or a character item that cycles and changes the weapon type: L stands for laser, M for missiles and H for homing. Up to two options can be grabbed, appearing above and below the ship. The control scheme in Over Horizon is quite original, in that you need to use both buttons in the controller to properly fire your weapons and choose the way options should be handled. Press A if you want to shoot to the right and B if you want to shoot to the left. While pressing one of these buttons push the other one to change the position of the options (either close or away from the ship). If the other button is kept pressed the options will keep moving up and down in circular patterns. In order to increase the weapon power stick to the same character item, eventually the shot from both options will also be powered up to the maximum level. Important: options can also block most enemy bullets!

The last aspect of gameplay is speed control. There are four speeds available but there's no clear indication of which one you're using (the screen is devoid of any displays whatsoever). You choose the speed by pressing SELECT, after which a brief burst animation is shown: if it appears at the ship's rear it means the speed is going up, if it appears at the front it means the speed is going down. The default speed when you start the game or when you're respawned after dying is 2. There are occasions where higher or slower speeds will be preferable, so keeping track of how fast you are and how fast you want to get is essential for better chances at survival.

Even though the control scheme is considerably rich and intuitive, it also tends to cause confusion when the screen gets too cluttered (and it will) and you want to take care of enemies from both sides of the ship. If you're shooting to the right and suddenly you want to shoot left you need to release button A first and only then press button B, otherwise you'll just move the options around if you press B while button A is held down. Over Horizon often calls for quick reactions and swift shot direction changes. The third stage in particular is a great example of this - you need to move the ice blocks around to get through, but it's also possible to crush enemies by doing that.

Pausing the game allows you to know your score and life stock. Extends are awarded with 100, 300 and 700 thousand points, and every stage has at least one extra life to be (easily) found. Scoring is straightforward and is ultimately made pointless by the fact that you can use one of the teleport doors in the last stage to loop back and score more points while getting a 1UP over and over. This teleport door is the lower one in that screen with two doors to the right. I guess it was left there so that you could power up the ship if you happened to be low on firepower, but they could at least have excluded the repeated 1UP appearances. The ending credits will halt on your final score for a brief while before showing the final boss's embryo fleeing and swearing revenge. The final message (YOU HAVE WON THIS TIME BUT I WILL BE BACK) only disappears when you reset the console, but unfortunately this also resets your high score.

Thanks to the varied design, the right degree of challenge and the unlimited continues, which helps practicing and successfully avoids frustration, Over Horizon is really fun and can definitely be labeled as a highlight of the NES library. The difficulty ramp is adequate and the game keeps you on your toes most of the time. Stages 5 and 6 come with extra bosses and will certainly demand some continues until you can safely deal with all the alien hazards. Level bosses are preceded by a WARNING message (one of the tiny bits of influence from Darius) and are often marked by easily recognizable movement patterns. Controls are spot-on, with built-in autofire and fair hit detection. The only possible gripe involves the weapon system - it's severely unbalanced towards the laser shot, so missile and homing are ultimately useless. A little bit of flicker and slowdown should be expected in key areas, thankfully with no negative impact on the game as a whole. If you stop shooting the music will gain an extra layer of bass, one of those smart moves to get the most out of the audio capabilities of the NES.

EDIT: there's an "edit" alternative at the start screen that allows you to reposition the ship's options to your liking, as well as mess around with the weapon's power levels.

My final score is the one below. Before entering the last chamber to deal with the brain boss (it's as if the final boss from a Gradius game could actually pose a fight) I warped back twice on that lower teleport door to max out my lasers. 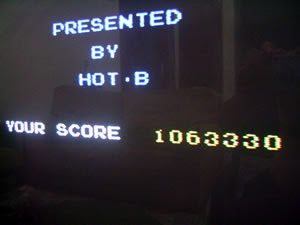