Those who’ve been there know that R-Type presented the outset of an intergalactic struggle, a desperate mission to free enslaved solar systems from the evil clutches of the Bydo empire. As expected (for us anyway), the Bydo weren’t really gone after the heroic actions of the first chapter, so in R-Type II we have yet another chance to kick their asses. A couple of weeks ago the time came to finally continue the battle against the evil clutches of doom, in more of the same alien, claustrophobic outer space landscapes filled with deaths in every corner. Yes, the style didn’t change a single bit, so players should prepare for another glorious dose of strategic memorization in order to fully enjoy the wonders of R-Type II.

It was with pleasure that I dusted off the R-Types compilation for the Playstation, a must-have package that includes arcade-perfect renditions of R-Type and R-Type II. Are you a shmupper and Playstation collector but still don’t own R-Types? Shame on you, my friend! If you’re one who enjoys extra stuff in your shmup media, you’re also missing out on a neat animated intro and several bits of valuable information about the enemies for both games, as well as a comprehensive glimpse at the Bydo backstory.

As a sequel, I feel that R-Type II doesn’t get much credit today. As far as sequels go it isn’t as well regarded as Gradius II, for instance. This probably stems from the fact that it doesn’t really offer a huge step-up above the original (unlike Gradius), but it should also be mentioned that further games in the series helped eclipse it because of their wider improvement leaps. Nevertheless R-Type II is just as much fun as the original, and for the regular bystander it might even surpass R-Type because of a few factors that make it a slightly easier challenge. 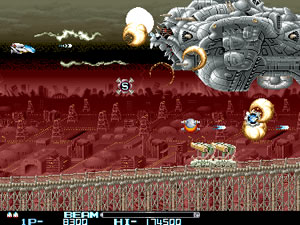 Classic gameplay: it returns intact from the first game. The new R9C (C for custom) is capable of firing single and charge shots, as well as missiles acquired with M items. By taking any of the weapon power-ups a force pod will appear from the left. The force is an invincible device, causing damage by contact and shielding the ship against regular bullets. It can be attached either in front or at the rear of the ship, with the detachment process being controlled by a separate button. A second power-up item will activate the selected weapon’s capabilities, and a third one will max it out, also granting maximum power to the force pod. Bits are tiny half-spheres that hover above and below the ship and carry some of the force pod power, providing extra firepower and protection. And let’s not forget about the ever so important speed-up (S). All items are concealed inside these tiny mechas that bounce around and leave the screen if they’re not destroyed in time.

New aspects of the gameplay include exclusive additions to the weapon gallery. Alongside the classic wave shot (red), bouncing lasers (blue) and crawling streams (yellow) we now have a forward laser that “bends” with mild homing ability (green) and exploding clusters (gray). An alternative to the regular homing missile type (red M) is the new ground missile (blue M) that explodes along the surface it hits for a brief distance. The charge shot has a secondary charge level that generates a wider, even more powerful blast. To trigger it you need to release the button at the correct time because the charge gauge keeps cycling over the initial charging round.

R-Type II is comprised of six loopable stages with two checkpoints each. Even though this might indicate the game is short, all levels are a bit longer than in the original and do not incur in any severe recovery problem – an aspect that killed R-Type for many people, since it was more reasonable to restart the game than to go on if you died in the last couple of stages. This alone is reason to qualify R-Type II as an easier, more approachable game. The design builds upon ideas of the original and blends them with graceful taste, such as in the baby aliens and the breakable serpents of the last level, or the moving blocks that create/destroy a living maze in the fifth stage prior to a boss that sounds a little familiar. The huge spaceship level is expanded to a deadly fleet of smaller battleships that move around the whole screen in a continuous attempt to corner and crush the player. And not everyone knows that to uncover Dobkeratops, R-Type’s iconic first boss, you need to actually blast the nose of the first boss in this game.

More intense from the get-go, R-Type II boasts an energetic BGM on the first stage, which follows a brief animation sequence that shows the R9C departing for battle. As in all games of the series, atmosphere is king and dictates the tone of the rest of the soundtrack. My favorite song has to be the one that plays during the 4th stage, I even decided to switch from wave shot to laser halfway through this level just to listen to it more clearly. You see, wave shot is still the best weapon to play the game, but the downside is that it’s too noisy. Its sound effects easily overshadow whatever is playing in the background.

Speaking of strategy, after taking wave shot in the first stage I stick to it until stage 4. Then I grab it again briefly during the fifth stage, but the game practically forces you to retake the laser in order to go through a vertical passage. Wave shot is again the key to safely get through the destructible net prior to the last boss, then the laser is once again shoved down the player’s throat. From the new weapons my favorite is the bending laser (green), the gray one is awkward, slow and its short reach doesn’t help at all. Missile type is mostly irrelevant, but it’s much better to have ground missiles during the whole battle against the space fleet of the third stage. One thing that bothered me is the score you get from the second boss: for reasons I yet don’t know, sometimes you lose points instead of getting the 7.000 you deserve for killing the creature. Maybe its moving penis is sensitive to something the player does, I can’t be sure (insert Giger-esque sexual imagery reference here FOR GREAT JUSTICE).

One thing in R-Type II that’s clearly tougher than in the first chapter is the second loop. It’s balls-to-the-wall hard. I wish I had gone past the first stage when I looped the game but I didn’t. I guess this serves as a hint that Irem actually listened to its audience when developing the game: make the first loop more manageable, but release the Kraken in the second loop. Extends come with 200.000, 350.000 and {probably} for every 150.000 points afterwards. Note that the Playstation disc allows the player to map a separate button for shot autofire (which makes a perfect control setup), as well as position the HUD wherever you want on the screen.

R-Type II was partially “ported” to the Super Nintendo as Super R-Type. This isn’t a pure port in that it only retains a few stages while adding new ones and replacing bosses. Another way to legally play the original arcade game is in the R-Type Dimensions compilation, released for the Xbox Live Arcade in 2009. My final score on the Playstation version is below (NORMAL, loop 2-1). 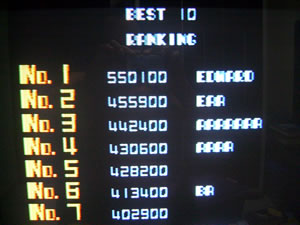