An alien race has been spreading terror throughout the galaxy, and it's up to a spaceship called R-9a "Arrowhead" to blast off and strike this evil empire. This brief and classic premise has been revered and dissected by shooter fans since 1987, when Irem unleashed R-Type upon the arcade world. Instant success and one of the most important shmups of all time, soon the game was ported to a variety of different computers and home systems, including NEC's PC Engine. Newcomers are often confused as to why there are R-Type I and R-Type II, when we all know the second game was never brought to this particular system. In fact, in Japan the original R-Type was split into two HuCards: R-Type I has the first four stages, whereas R-Type II contains the second half of the game. It seems this was done because of limitations regarding the HuCard memory capacity at the time. The limitation was bypassed later on, when the port received a Western localization for the Turbografx-16 and appeared in a single card.

So how are we supposed to play the complete game with two HuCards in our hands? It's simple! Once you finish stage 4 you're given a passcode. Take out R-Type I from the console, start R-Type II and press SELECT + START. Insert the code and voilà!, you're starting stage 5 with everything you had when you beat the 4th boss. After you complete the game a new passcode appears, and if you want to tackle the second loop just go back to R-Type I and insert this new code after pressing SELECT + START. And so it goes, two HuCards working together for the good of the universe against the Bydo empire. 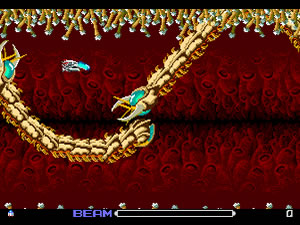 These days the gameplay in R-Type is unknown only for those who are COMPLETELY new to the genre or have been living under a rock. The classic drill is as follows: a spaceship must battle across eight stages of exquisitely crafted design, collecting items to increase firepower and defensive capabilities. Tapping the shot button fires single pea shots, holding it for a while charges a powerful beam that’s fired upon release. As for special weapons, three main colored pick-ups are available: red (straight wave laser), blue (ricocheting 3-way laser) and yellow (crawling energy streams). Upon picking the first colored item a “force” pod will appear from the left, which can be docked to the ship’s rear or front as you please. Besides being the source of power for the currently used weapon this force pod is invincible, damages enemies by contact and protects the ship against all regular bullets. As you collect two additional power-up items its size will increase accordingly and the weapon will reach maximum power (further power-ups have no effect besides adding 400 points to the score). The force pod can be detached and sent forwards /backwards by pressing a dedicated button, but while detached weapon firepower is disabled and replaced by common shots fired in a K-shaped form. Pressing the same button again will summon the force pod back to the ship so that it can be re-docked to one of its sides.

In addition to the main items described above, there are also auxiliary pick-ups such as S for speed-up (at least one is needed to make the ship maneuverable), M for guided missiles (fired in pairs at regular intervals) and bits (small semi-spheres that hover above and below the ship, presumably made of the same type of energy of the force pod). If you play well enough you’ll have a fully powered ship by the half of stage 4. However, if you die you lose all power-ups and get sent back to a checkpoint. Is that the Achilles’ heel of R-Type? Many people think so. However, giving up is not an option for a real shmupper, is it? There are two checkpoints per stage, with the exception of levels 3 and 8 (die there and restart the stage from scratch). Extends are score-based and appear in asymmetrical intervals (50K, 200K, 350K, 500K, 700K, etc.).

The port that came out for the PC Engine is so impressive that at first glance one could deem it arcade-perfect. That’s not really the case, but the adaptation is extremely faithful and keeps the original thrills, if only for a slight reduction in difficulty, a small downgrade in the soundtrack (still awesome though) and negligible details in graphics. A little flicker can be seen here and there, but it's nothing close to what happens in the Master System port. First boss Dobkeratops is just as frightening and easy, and all major enemies and sections are duly preserved. What got my attention is that there are no power-ups within the shower of debris of the 7th boss – I never liked them anyway, you could end up getting an unwanted weapon or another speed-up against your will as the ship scrolled to the center of the screen upon stage completion. A nice exclusive extra is the new boss at the end of stage 6, which appears right after those moving blocks stop coming from the upper hatch.

R-Type is the prime example of a game that’s punishing but rewarding in the same measure, and it would certainly be less revered if it were less difficult. Since it gets excruciatingly hard to recover (not to say impossible), dying in the second half of the game is often reason to give up and restart. Unless you’re aiming at getting the highest possible score, to which milking becomes an “applicable” device in stages 3 and 7, this is a shooter that strongly encourages the 1-life clear. Besides its unmistakable well-crafted design, that’s probably an underlying reason for why it’s regarded as an absolute classic: the simple yet larger-than-life nature of the challenge bestowed upon the player.

Owners of the CD add-on can enjoy the full game in a single package by means of R-Type Complete CD, which unites both HuCards, comes with an arranged soundtrack and adds cut scenes to enhance the storytelling. In its core it’s exactly the same experience, with the striking difference that it does not loop.

Given how the PC Engine handles the game, I must confess I didn’t switch HuCards when I died in its second half... I didn’t want to stress my precious Turbo Duo, so I just restarted from stage 5. Once I beat the game I did have a single go at the second loop, dying on the rematch against the battleship. Unfortunately there is no high score buffering in this version, so the picture below shows the score I had on me as I started stage 3 in my last life. Note: for the first time ever I managed to beat the final stage after dying on the last boss. My codes were CKL-8033-MI (stage 1-5) and EEA-5007-DM (stage 2-1). 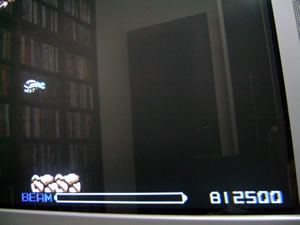