Line of Fire for the Master System is a second generation port of Line of Fire, the arcade game developed by Sega. I like to call it second generation because the game switched genres from one platform to the other, going from a light-gun shooter to a vertically scrolling shoot’em up. What’s really interesting about the conversion is that despite the genre alteration and the fact that it’s a totally different experience the Master System port actually follows the same basic outline and stage settings of the arcade original. Don’t get your hopes up though, it’s an extremely downgraded and watered down vision to the same story, sort of a much slower and poorer cousin to Thundercade on the NES.

Coming to this game after being exposed to fast shooters can be a shock. The Master System is no powerhouse but it surely has faster games, and Line of Fire feels even slower than usual. I have no idea if the hidden 3D mode has something to do with this (hold buttons 1 and 2 as you power up the console), but adapting to the game’s slow pace takes a little while. Graphics and colors are very basic, and since the repetitive music follows the same quality standard it’s easy to see why the game isn’t technically remarkable by any means – at least without the 3D glasses, which is how I played it.

The game’s premise is established by a nice opening with huge fonts and a quick intro that presents Jack (you), supposedly a combat expert who happens to come across a super weapon inside an enemy base. How you got there in the first place doesn’t really matter, so it’s up to you to escape and take the super weapon back to your allies. A map shows your progress before each stage starts, and as you make your way through several areas around the original starting point you need to take control of different military vehicles such as a jeep, a boat and a helicopter. 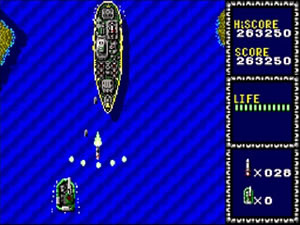 A boat against a ship

It doesn’t matter which craft you’re controlling, they’re all able to fire straight shots from a machinegun (button 2) and missiles (button 1). The machinegun has unlimited ammo, but missiles are limited and start with a stock of 50. Don't fire them away at will, if you do so and you get to the second boss without missiles you'll be in deep trouble. Gun and missile attacks behave differently for each craft: for the jeep and the boat the machinegun will only hit ground enemies, with missiles being used against enemies in a higher level/altitude; for the helicopter it’s the opposite, naturally. Missiles are a little tricky to use, in that they follow your lateral movement and can make it either hard to hit moving obstacles (enemy helicopters and bosses) or easy to destroy turrets (plan your sweep or lean against a wall to “direct” the missile to its target).

One of the design decisions that immediately springs to mind as unusual in Line of Fire is that you're only allowed to move at around 40% of the screen. If you keep pressing up at mid-screen the scrolling will only accelerate a little, therefore you can't plan any dodging strategy that involves the upper half of the playing field. It isn't advisable to stay glued to the bottom of the screen either because sometimes you'll be surprised by trucks or jets coming from behind, or even the item carrier (ground missions only, levels 1 through 4). This carrier will stop for a few seconds as it appears, so wait until it moves up a little to destroy it and take either the missile round (30 missiles) or the first aid item that regenerates 1/3 of your health (each life in Line of Fire has a 20-point health meter). In aerial missions (levels 5 and 6) items appear from regular enemies, such as incoming jets or train wagons.

Though short and simplistic, the game comes with a few features that are strange to shmups in general, such as the ramps in the jungle stage or the bridges that need to be taken down in the river stage. You need to take the ramps to jump over the ravines, and when you do steer the jeep to the left or you’ll inevitably crash. Ramps will also appear during the boss fight, meaning you can use them to reach the enemy’s altitude and hit him with the machinegun – a risky and unnecessary possibility that’s there just for show actually. Use missiles to destroy the bridges in the river stage or you’ll crash, don’t get close to them until they have collapsed or you’ll get hit. By the way, hit detection in Line of Fire isn’t really a problem, but you can lose energy if you’re too close to a boss when it explodes or when the abovementioned bridges fall. You also get hit when you go over one of the falling rocks of the fourth stage after they’ve already stopped rolling.

Caught inside the enemy base
(courtesy of YouTube user fakeplasticball)

Upon completing a stage you’re given a bonus based on destruction ratio and remaining health. On the merits of challenge there isn’t much to say about Line of Fire, at least until you get to the last boss. All previous bosses have easy and predictable patterns, but the secondary form of the final fortress poses a much harder challenge simply because it overwhelms the player with bullets, kamikaze jets and quick lasers that drain a lot of health. The first time I got there I panicked and died all my lives in a snap. Then I used the two available continues to practice and do better next time.

I had to beat the game once to find out how sloppy the programmers were with the high score buffering: all points achieved in the last stage aren’t added to the high score that’s permanently shown in the top of the HUD (even if you beat the game the highest score displayed is the one you get at the end of stage 5). It’s only possible to see your total score for a few seconds while the bonus for the last level is being computed, after that you’re treated with a relatively nice ending and the final credits. A few more plays later and I was able to register the 1CC result below (Normal). Note: Europe and Brazil were the only regions where Line of Fire was released. 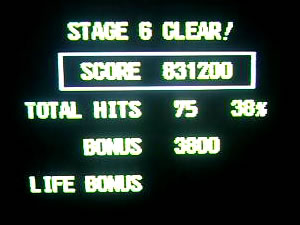