Back in 2009 Cave decided to port one of its shooters to the Xbox Live Arcade service, so the company ran an online poll to get feedback from the STG community. The winner of the poll was Guwange, seconded by ESP Ra.De. (Progear was my choice and finished in 4th, also losing to DoDonPachi). I admit that I didn’t have that much enthusiasm for Guwange at the time of its release, and the little scandal that followed didn’t help either. Long story short, the game came out with forced widescreen on all resolutions, no HD graphics and no real 3:4 TATE mode. Of course only die hard shmup fans really cared about these contradictions, but fortunately they were properly addressed by Cave a while later.

Okay, but how about the game itself? It’s difficult to judge its appeal if you’re not into the genre. Guwange is probably the most unique title within Cave’s library, in both aesthetical and functional ways. It doesn’t play like a normal shooter, yet the company's style is written all over it. Also it doesn’t look like the rest of Cave’s output due to the basic influence of classics such as Commando or Gun.Smoke, yet the art design clearly establishes ideas that would be used in later titles such as Espgaluda. As the player, you must choose between three characters and walk your way across several villages of ancient Japan in order to take down an evil wizard. The story is supposed to take place in the 15th century and has more complicated and darker undertones, but I won’t delve into those. Suffice it to say the whole game design reeks of the Japanese culture of old. No visual frills should be expected, but watch out for some of the most gorgeous 2D sprite artworks ever designed for a shooter.

Playing Guwange is a different shmup experience because of the dual control gameplay scheme. Regular shot is complemented by the so-called “shikigami” attack. The shikigami is an entity/spirit that possesses the character and can be deployed to attack enemies at any time. When the shikigami is summoned you’re able to control where the spirit must go around the screen, but your character is restricted to horizontal movements at a slower speed and can't use the regular shot to full effect (only sparse bursts will be fired if you keep the shot button held). Besides attacking, the shikigami is also capable of slowing down enemy bullets and wiping them out if they’re close to the explosion of a destroyed target (bullet break). Once you let go of the button the shikigami gets sucked into the character and you’re again free to move around at regular speed and resume using the regular shot. Boss fights work differently because the shikigami will remain permanently deployed even if you don’t use it (it just sits there and waits). The third and final control input is the bomb, which makes the character float as a huge burst of energy is discharged from his/her chest. Invincibility is in effect during the whole bomb animation. 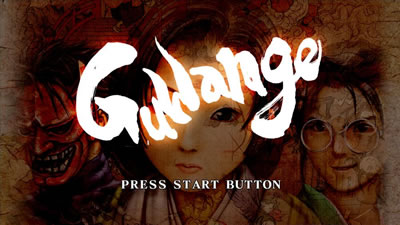 Coming to grips with the unusual control scheme is good for survival, but essential for scoring. The challenge in Guwange is built around the combination of regular shot + shikigami. As the game unfolds enemy placement and bullet patterns increase in complexity, often leading to overwhelming situations where taking damage seems unavoidable. Lives are implemented as a health bar consisting of three “lives” and a chunk of health per life. Three kinds of refilling items can be triggered at specific points in the game to recover lost health (all other items are power-ups, scattered upon death). Damage is proportional to the size and the consequence (health/life loss) of the bullet that hits you, and that also applies to the coin chain/counter, the main objective of all people who accept the challenge of playing this game for score. Collecting coins builds a multiplier than can be carried over from one stage to the next and even maintained during the whole game if you’re skilled enough to do so.

In order to not lose the coin chain you need to keep the skull meter alive. This meter measures how stable your chain is, and depletes as long as you’re not killing anything or holding at least one bullet with the shikigami attack. Once the skull meter is depleted the multiplier is reset. If the meter is kept at a flashing state (at least more than half full), killing ground enemies with the regular shot makes them leave coins behind. This is, in fact, another hint on how to extract more coins from enemies: regular shot works better on cannon fodder, but the shikigami is definitely recommended for all enemies that fire more than a couple of bullets. It takes a good amount of practice to come up with the best mix of shot + shikigami for optimal scoring possibilities. Beware though, the higher your chain and the longer you survive without being hit the harder the game gets (rank!).

Even though the nature of the shikigami attack seems perfectly suited for defense, using it aggressively and according to a good plan is the best way to go. Knowing when enemies are about to fire their weapons is excellent because then you can just park you shikigami over them and reap all those shiny coins. Besides, all coins generated with a shikigami attack are automatically sucked into the character. Other advantages of shikigami usage: it collects all coins standing on its way wherever it goes; if the skull meter is full, additional coins are steadily added to the multiplier. However, the primary rush in Guwange’s scoring system is reserved for when you get more than 1.000 coins, because then you gain even more coins just by hitting an enemy with shot. Additionally, bosses can be milked by keeping the skull meter flashing and hitting them with shot – a technique that works really well by keeping shot pressed at all times (autofire) and tapping shikigami to constantly switch between a flashing and non-flashing skull meter. This is also indirectly useful to induce slowdown and achieve extra speed control when dodging certain bullet spreads.

In keeping with the ancient Japanese mythology theme, the creepiest bosses are also the most fun to battle and milk. The caterpillar (stage 2) can be milked for the side worms it expels when parked vertically on either side of the screen. In one of the attacks of the catspider/spidercat (stage 3) the spores it releases leave behind a trail of coins if you destroy them accordingly. All boss strategies must take into account the fact that each successive attack gets increasingly harder the more it loops. It’s important to note that during boss battles the lower half of the skull meter depletes at a slower rate, which is good to breathe when you need more time to dodge at regular speed. Skull meter depletion relates intimately with bomb usage, since whenever a bomb is used it’s impossible to fill the skull meter. If you don’t want to lose the chain while bombing, get the skull meter as close as possible to maximum and only then use the bomb. In the case of Guwange panic is only an option after the coin chain has been lost, but here's a good treat for survival play: all extra bombs you get aren't lost when you lose a life, and every time you die your next life comes with two new extra bombs. Thanks, Cave!

Yet another case where the real thrills of the game lie deep within the gameplay, I believe Guwange is often bound to disappoint the casual player. Despite the good atmospheric music and the exquisite 2D graphics, the price of admission is a bit too high and demands a lot of dedication, either when playing for survival or playing for score. I loved how absorbing it is, but for me losing the multiplier before the demon/zombie section leading to the final boss is always extremely frustrating (watch out for the food item that refills the whole life meter, released by killing the spiders in the horizontal corridor of stage 6). Gensuke, the 15 year-old teenager, was the character I chose to play the game. He’s got a straight wider shot and is the slowest of the bunch. Shishin, the oldest one, wears a demon mask and his weapon bends towards the side he’s moving to. Kosame, the 17-year old girl, is the fastest character, an archer endowed with a thin straight shot. Shikigamis follow character’s speeds but differ slightly in size and shape, and each character also has his/her own start sequence and ending.

Besides the main arcade game, Guwange on XBLA also comes with a special arcade limited release called Guwange Blue and an exclusive Arrange mode with twin stick controls, developed exclusively for the port. Different gameplay and scoring rules apply to both extra modes, but the Arrange one is severely toned down in difficulty, almost like one of the Novice modes included in retail Cave releases. For other hints on how to approach Arcade mode and gain a better understanding of the game's details I recommend reading this excellent article.

On the XBLA port you can't input your initials when the credit is over, but in each game mode the Score Attack option allows you to register your results and upload replays to the online leaderboards. At least all Japanese text/numbers were duly translated into English, so there's no more need to decipher the high score screen (as is the case of the original arcade release). As for the game itself, there are lots of display tweaks available, sadly buried in a series of extremely unfriendly menus. You can adjust position, zooming, smoothing, transparency, rotation, etc., but the only setting I cared about was the one related to TATE on a CRT set. I had a hard time doing it right, here’s my quick guide on how to do it: go to Settings → System Settings and switch Wide Mode to OFF; go back to Screen Settings → desired game mode → Extra Display → Preset 5 and  push button A; go to Game Window, push button A again and adjust the zoom as you wish (the ideal setting for my TV was 1,76). The same setting can be used in any other game mode just by selecting Preset 5 in Extra Display. It's complicated but it works perfectly, the only problem is that features such as high score tables and replay screens get chopped off on the sides.

As planned, I finished Arcade mode with Gensuke. In this 1CC run I lost the chain stupidly before the spider corridor in stage 6. Since it's so damn easy, I also 1CCed Arrange mode on my very first try, also with Gensuke. Note: in the arcade original you couldn't see your 1CC result until you got to the high score screen, and this also applies here. Several bonuses are added to the score you achieve when you beat the final boss, based on things such as maximum coin chain, remaining lives/bombs, etc. My final result for the Arcade mode is highlighted in blue below (run uploaded to the online leaderboards): 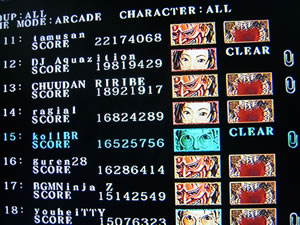