A little after I started playing Raiden II on the Playstation I caught myself imagining a developer conversation at the Seibu Kaihatsu headquarters. “So people thought Raiden was easy?” “Yes, they did say that, boss.” “That’s inadmissible!” “Some people said the first loop is a piece of cake, boss.” “Nooooo…” “Don’t worry, boss, we’re working on making Raiden II much harder.” “Harder??? These people don't know the meaning of harder yet!” And then I resumed getting slaughtered over and over... Long story short, I have absolutely no doubt that Raiden II is one of the hardest shooter sequels ever designed, comparatively speaking. The increase in difficulty is so steep that going back to Raiden right after beating Raiden II made the first game look like child’s play, with everything running in slow motion. Therefore, if you ever hear people complaining about the over-the-top nature of today's bullet hell shooters, tell them to go play Raiden II. I mean it.

The above comparison is restricted to the titles contained in the US release of The Raiden Project for the Playstation when played at full defaults (Colonel). There are lots of shady information about different difficulty settings even in real arcade boards for Raiden II, so I’ll just assume that whatever we get in the Playstation port should be at least close to the original experience, especially when the game is played in real TATE. Note #1: the “TATE” option that’s present in the disc isn’t actually the real deal because it also rotates the controls, so in order to get real TATE you need to insert the following precious cheat code with a Gameshark device: 80050BAC 0003 (it works perfectly for both games and can be permanently saved in the memory card). Note #2: real TATE is included in the Japanese version of Raiden Project, but that one is botched because it comes with mandatory checkpoints for Raiden and for the blue ship in Raiden II, and that alone is reason to go for the North American version. Note #3: if you still want to have checkpoints in the US disc, set "start back mode" to ON in the options.

Really, what a mess, Seibu! Everything considered though, The Raiden Project is simply a must have title. It comes with an animated intro, two soundtracks for each game (original and remixed) and several configuration/display options. And if you can input the special code above for TATE you pretty much gain access to an arcade at home. 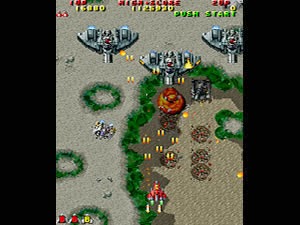 A desperate fight against the Cranassian armada

Raiden II is in several ways similar to the first Raiden. There are eight stages, five of them taking place on Earth and three in outer space. The ships are still the same, mk-II (red, player 1) and mk-IIb (blue, player 2). The mechanized aliens are still the enemy, I just don’t have any idea of the story behind everything. Even though the themes in all levels reflect those of the original game, in Raiden II graphics and explosions are noticeably more detailed. Shrapnel and debris fly all over the place, and you can even see pieces of enemy aircraft falling to the ground with varying impact sizes. Additions to the basic gameplay appear in the form of a brand-new weapon, a new bomb type and a few tiny differences in how scoring bonuses are applied.

Besides the vulcan (red) and the laser (blue), a third new option to use as main weapon is the latching laser (purple), also known as the infamous “toothpaste” laser. Upon initial firing it works like the blue laser, but then the streams merge and the magic happens: whenever this weapon connects to one or more enemy it bends, ricochets and rebounds all around, creating a spectacle that can be directed but not really controlled by the player’s movement. Some people believe it has homing abilities, but the truth is that it will only fulfill its purpose when the player directs it to a proper target. Weapons are selected by collecting a power-up that cycles colors in a fixed sequence (red → blue → purple → red), and in order to increase the weapon’s power you need to stick to the same color. As for bombs, in addition to the regular nuclear bomb (red B) we now have the cluster bomb (yellow B), which is less powerful but is deployed with almost no delay, covers a wider area and lasts a tiny bit longer. Player 1 (red ship) starts with three nuclear bombs in stock, whereas player 2 (blue ship) starts with three cluster bombs. Released by little ground buildings, missiles can be straight nukes (M) or homing (H). And that’s it, use one button to fire and another to drop bombs (all controls are configurable, autofire included).

Scoring devices haven’t changed much. Gold medals are still worth 500 points, with new blue medals worth 3.000 points each. The number of these medals multiplied by the bomb stock × 1000 corresponds to the bonus at the end of a stage (watch out for the last hidden medal that appears one or two seconds before the stage ends once the boss is destroyed). Sometimes a miclus appears instead of a medal, giving 10.000 points but being excluded of the medal count. Once you’ve maxed out power, every extra power-up item is worth 5.000 points. Extra bomb bonus: if you manage to max out bomb stock with bombs of the same type (all nukes or all clusters) every extra bomb of the same type results in precious 50.000 points.

None of the above requirements for higher scores is worth the risk if you die. Raiden II is a cruel shooter, and the lack of checkpoints has no bearing at all in difficulty. There’s no breathing room whatsoever upon dying. Mercy is a term that has no meaning here, enemies are out to get you from every possible position/angle and every foe will fire at least one bullet before biting the dust. Unless you know what you’re doing, standing still is a free pass to end the credit horribly - however, flying around desperately won’t help either. Once the player has memorized enemy placement and established a safe route, slow tapping is probably the best strategy during most of the time. There’s a “rhythm” according to which enemies will fire, dictated by a characteristic reload window, and moving back from a sweeping maneuver must take place during that time when enemies are not allowed to shoot. Getting the hang of this rhythm is essential to survival because you need to squeeze that ship within dangerous spreads from bosses, amidst sniping floaters and across barrages of tanks coming from below. Raiden II stings, and it stings hard. Maybe more so than any other shooter, it taught me to be more humble and less greedy. Being sniped at the peak of a great run is devastating, if I had been photographed every time this happened we could write a tragic comedy with the pictures.

Mission accomplished for the 1st loop of Raiden II

Persevering is half the battle of beating Raiden II. The other half comes from adapting to the merciless gameplay and exploiting a few little advantages here and there. One of them is the fact that every enemy needs to be seen to fire anything against the player, so leaving them out of your sight is a good – and sometimes necessary – move. Beware though, those floaters are fond of sniping you from the sides blindly if they have already crossed the play field in one piece. There are no score extends, only two 1UPs that require some ability to be obtained (3rd stage: when you’re leaving the harbor don’t destroy the silver box, instead let the tank coming from below do it; 6th stage: blast the central bunker that guards the crystal quickly, bombing helps). Uncovering and taking fairies (10.000 points) in stages 1 and 4 guarantees a wave of power-ups upon death. Unfortunately since the game is so punishing, most of the time extra lives or fairies aren’t really useful unless you’re already facing the last boss. Trying to make some sense of the power-up shower brought by the fairy while being massacred from all sides is almost a bad joke. There are also other consequences when dying, such as the screw-up of the item spawning routine. Depending on where you die the game starts mocking you by sending bomb after bomb after bomb when all you need is power-ups or that precious P for maximum power (it only appears from stage 5 onwards).

In my opinion, entering the sea area of the third stage marks the first difficulty spike, which culminates in one of the toughest boss fights in the game (the only one where extra enemy ships appear to make matters even worse). The second difficulty spike is in the fifth stage, where enemy shots get crazy fast and gaps between them become even smaller. Sniping hell awaits those who let flying enemies live long enough. Stage 6 is pretty much the same, stage 7 is kind of a breather provided you don’t get greedy for medals or power-ups (these keep floating at mid level, teasing the player all the time) and stage 8 resumes the final phase of the onslaught. My favorite weapon for the stages is the toothpaste laser, but I do switch to laser (blue) on the 3rd, 6th and 7th bosses for its sheer power and fast destruction rate. I feel sorry for the vulcan weapon, in Raiden II it’s just a shadow of what it was in Raiden. Since homing missiles are so weak below maximum power, I only take them prior to the fight against the second boss.

With so much going on to make the experience such a hard one, is the game actually any fun? Hell, yes! Raiden II is such an incredible challenge that every stage won feels like a victory in itself. Whenever I’m playing it I’m on my toes all the time, senses on the tips of my nerves, eyes all around the area looking for snipers. Let’s not forget about the music, which starts in a slightly corny tone but evolves to some rather epic BGMs in the last half of the game (so epic that they served as basis for the soundtrack in Raiden IV).

I need to thank the wonders of emulation for allowing me to practice the game, without it I would never be able to accomplish the 1CC. After completing the first loop I reached stage 3 again and went out in a blaze of greed with the final score shown below (Colonel difficulty). Unlike in Raiden there’s no advantage in choosing the blue ship here, so I went with the classic red mk-II. Note about my TATE experience: the resolution on Raiden II was a little too wide for my screen, so I couldn’t see a span of approximately the ship’s width when leaning against the sides (Raiden was okay though). Aside from that, I should note that in later levels a fully powered toothpaste laser causes slowdown in key areas, such as the last boss. 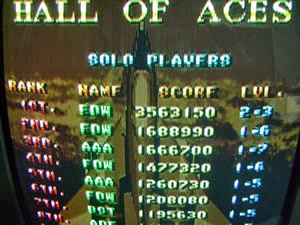 Raiden DX, the next installment in the series, seems to be an even greater challenge than Raiden II. We shall see!
Posted by Edward at 8:39 AM