In the realm of console titles that allow users to develop their own games, I'm sure some of the most famous ones are those from the Dezaemon series, dedicated exclusively to the classic shooting genre. Throughout history there were other more obscure attempts made for shmups and other genres as well, and in the case of the FM Towns computers/consoles the shooter representatives are Shooting Towns and Super Shooting Towns. Recently I spent some time with the latter, which is much less rare than the first one and is advertised by the developer as a "super shooting tool". Printed in the initial pages of the thick instruction manual is "welcome to the game factory", so if you're able to read Japanese feel free to start building your own shmup with it.

I have already thought about designing my own shooter, but no matter how willing I might get from time to time I certainly won't be using Super Shooting Towns to do that. Not only are the disc and system really old by now, but there's also the language barrier and a handful of hardware details that I'd have to learn prior to starting the journey. Therefore, as a shmupper the fun I could extract from Super Shooting Towns came down to the sample game, a very short demonstration of the engine's development capabilities. This sample game is so bare-bones in its presentation that it doesn’t even have a name, options or any other expected complements such as an attract mode. Just boot the disc and play it. By the contents of the manual I guess you can use the editing tools to tweak this sample game as you wish. 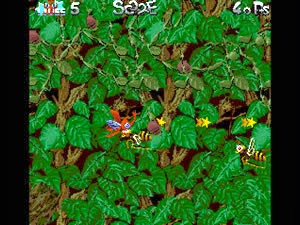 The nicest thing about the sample game in Super Shooting Towns is the choice the developer made for the overall design: everything is insect-based. I love insect-based games, and even though this one serves more as a collector’s diversion it’s still a valid entry into a gallery that includes titles such as Insector X. Here the player controls a red beetle and travels through two stages with horizontal scrolling and two stages with vertical scrolling, fighting other insects of varying sizes along the way (use button A to shoot). As a rule of thumb you don’t die by colliding against enemies of your own size, so besides dodging the star-shaped bullets you’re also supposed to avoid large foes.

Multiple planes that move at different speeds are what immediately attract the attention in the sample game. The sheer number of parallax layers creates an appealing atmosphere, especially in the dense forest of the first level. While that’s a neat demonstration of the capabilities of the construction engine, I can’t state the same about the frame rate. The scrolling and the animation aren’t exactly on par with the parallax and the abundance of colors, which results in the gameplay being slow, murky and a little choppy. That said, a couple of bosses are the graphical highlight of the game, even though they don’t get even close to the awesome bosses seen on the Mega Drive port of Insector X. That’s only a hint at how underwhelming Super Shooting Towns is if you consider it’s running on a 32-bit platform. The only aspect in the game that can stand on its own is the music, which is mildly amusing.

On the actual gameplay, soon you notice some bugs are invincible to your firepower. That happens because they’re of the same species as you! Most of the time they cruise the screen in straight lines, bringing power-up items behind them. Just shoot to release and take the items. Distinguishing between them, however, is a task in itself, especially with the upgrades and options: you can either have a forward increase in power or a rear shot, and you can either get up to two fixed options or two rotating options (they look like little versions of the protagonist beetle). Finally, a heart-shaped icon is equal to an extra life (plus there's also an extend for each defeated boss). Dying strips you off everything, but thankfully it’s easy to recover firepower. In fact, the whole experience is extremely light and should only offer proper difficulty for children.

As of now I’ve never been able to see what Shooting Towns is about, so I still can’t assess which is the “best” one. As for Super Shooting Towns, I’ll probably never be able to confirm if it’s actually a “super shooting tool” as the developer puts it, and since it’s far more worth as a collectible than a proper game real players won’t be missing much by avoiding it. In any case, FM Towns fans who dig oddities might feel compelled to check a disc called Excellent 10, which was published by the same company and includes ten games developed with the tools available in Shooting Towns and Super Shooting Towns.

Below is my final score for the sample game in this one. If it had been harder it would've been more fun, but alas... It's more of a collector's pleasure anyway! 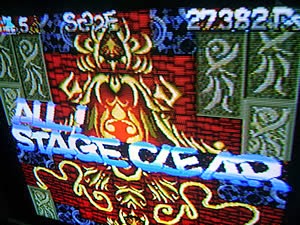