Since I haven’t played at least 50% of it, I can’t say I’m versed in the shmup gallery of the PC Engine. But I do know, as a fact, that the only arcade company whose ports really brought the best out of the console was Konami. Konami’s titles (all four of them) are of consistent top notch quality and stand out easily amongst the outings from other companies, arcade-related or not. But why am I babbling about Konami when the subject of the text is Side Arms? It's simple: this version of the game leaves nothing to be desired when compared to the arcade original developed by Capcom, therefore placing it in the same level of porting excellence of Konami even though other companies were behind its publishing in Japan and in the West.

As a game, of course Side Arms isn’t in the same league of Parodius Da! or Gradius. Practical evidence of that is the arcade board never being as famous as Konami’s and the game never seeing any sequel. Forgotten Worlds is as much a technical development over it as Side Arms is to Section Z (which by the way is my favorite of the three). That said, the PC Engine version of Side Arms is impressive in the way it retains virtually everything from the arcade experience, from graphics to difficulty. It even improves it in certain aspects, and the first noticeable one is in the music for the first level. Here it’s replaced with something more energetic and fitting, and if you care about music in a shmup as much as I do you’ll agree that this was no coincidence at all. The first tune in the arcade version is prone to draining the marrow out of the game’s bones before it’s even started.

The battle for survival has started!
(courtesy of YouTube user Encyclopegames)

Side Arms is about a robot on the loose, shooting the hell out of creepy stuff inside and outside of what’s supposed to be planet Earth invaded by aliens. Endowed with the ability to shoot both left and right, this mecha (also called Mobilsuit) is able to fire several different weapons activated by collecting the corresponding power-ups throughout the game. Items are released by selected enemies and cycle through the following when shot at: Pow, bit (an orange orb), SG (spread gun), Pow, MBL (mega bazooka launcher), Pow, 3way, Pow, mirrored Pow (light blue color) and either a star or a yasichi. Contrary to what everybody thinks at start, Pow is a speed-up, not a power-up. It takes three of them to reach maximum speed, and the only way to reduce speed is by taking a mirrored Pow. All other items correspond to actual weapons, which are powered up by collecting items of the same type.

Aside from the absence of a 2-player mode, the biggest departure from the original game is the method to select weapons. In the PC Engine port the player needs to pause the game and then cycle through them (that’s how you’re also allowed to check your speed level). I can’t help but wonder why the developer didn’t choose to have a visible weapon array cycled by pressing START or SELECT, like many other shooters do. Well, at least that makes for a cleaner screen. As for the weapons, the icons for bit and 3way are fairly intuitive (bits circle the robot when the default weapon is being used), all others aren’t. Icons for SG and MBL are very much alike, but these weapons couldn’t be more different: SG is a 5way slow-firing spread, while MBL is a powerful thin laser with low firing rate. The star and the yasichi are worth some points and enable a weapon called Auto, the only one that comes with autofire by default. Of course that becomes irrelevant when a turbo controller is used (it’s definitely recommended to use one).

As the game scrolls you need to be on the lookout for the α/β icon. It’s normally left behind by specific enemies but it can also be found in hidden places. Once uncovered, grab it and watch as a ship comes flying off-screen and docks with the robot to upgrade its armor and provide an additional 8-way shot to whatever weapon you’re using. Never mind the way the robot seems to briefly shrink in agony as he spits bullets from his chest (I always found it awkward). If you get hit while in the upgraded form you lose the extra armor and get back to the original Mobilsuit, and only when hit in that condition you lose a life and the weapon you're currently using. There are just a few frames of invincibility after that, so don’t try to take advantage of a supposedly longer window to ram into enemies. In fact, losing lots of lives in a row because you get overwhelmed upon dying is quite common in Side Arms, especially during the swarms of items and enemies of the later levels. 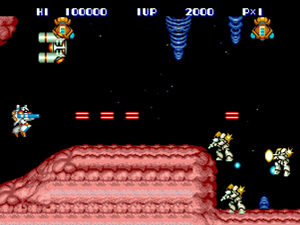 Refraining to take items in order to collect stars/yasichis for more points is the biggest cause of deaths later in the game. Since all items block firepower until you turn them into stars/yasichis, there comes a point where you need to take the items in whatever form they are to clear the screen and destroy potential threats. By doing that it’s easy to collect successive Pows and start moving too fast, which is also another source of danger (for me any speed above the default is too fast to play the game safely). Balancing item collection with speed management is the key to get through the second half of the game, when creatures approach flying and crawling non-stop from both sides.

Looking out for secret places with hidden items is important not only because of the α/β upgrade, but also to find extra lives and bonus points. The latter category appears in the form of strawberries, cows and golden barrels (don’t ask me about the reasoning behind them). Score-based extends are awarded with every 100.000 points, but they stop coming once you’ve made it past half a million.

Vibrant colors and faithful mirroring of all relevant aspects of the arcade game are already remarkable traits, but Side Arms for the PC Engine goes beyond that and even corrects some things that were originally off. Background confusion, traps in the terrain and that brief period of weapon transition upon armor loss are all gone here, qualifying this version as having improved gameplay over the original. The only crucial changes are the spread gun (SG) being capable of destroying enemy bullets and the addition of two brief extra levels – that is, if you consider every boss fight as being the end of a level (there is no separation whatsoever between stages in Side Arms). Other than that, if for any reason this port fails to excite the only one to blame is the arcade original, since the game itself hasn’t aged that well.

Next in line is checking what’s in store for the upgraded Side Arms Special, released later on for the PC Engine CD. My final 1CC result for Side Arms is below. 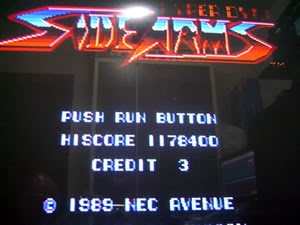