The whole point of having a cartridge or a HuCard game reappear in the CD format was always related to a major improvement in sound quality, at least during the dawn of CD gaming with 16-bit console add-ons. Little or no graphical upgrades were to be expected, so under this point of view Side Arms Special definitely belongs to a special category for going beyond the basic sound makeover of the Side Arms HuCard. While it does come with the same game with a remastered CD soundtrack, it also includes a special arrange mode that might be seen by some as a step-up from the original experience.
Integrating Capcom's early efforts in the horizontal shooter genre, Side Arms expanded on the ideas of Section Z by basically increasing the pressure around the concept of bidirectional shooting in a bare bones sci-fi setting. Players take control of a space mecha known as "mobilsuit", moving through several colorful environments outside and inside an alien planet in order to defeat an evil empire. That said, in Side Arms Special you're prompted to choose between two game variations as soon as the disc is booted: Standard mode is a relatively faithful port of the arcade game, whereas Before Christ mode shifts things around for a completely different Side Arms experience.
Standard plays just like the HuCard version albeit with CD-quality sound. Button I shoots to the right, button II shoots to the left and RUN allows you to switch between the weapons you have already collected (SELECT is used for just pausing). In order to activate or power up your weapons you must shoot at the items released by a destroyed carrier to make them change in a fixed order, picking up the desired one before the item settles into a star or a yasichi (looks like a candy/lollipop), which correspond to the "auto" shot and a few bonus points respectively. The order prior to the latter is Pow, bit (an orange orb), SG (spread gun), Pow, MBL (mega bazooka launcher), Pow, 3way, Pow and mirrored Pow (light blue color). 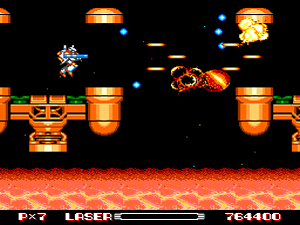 Stage 7 of Before Christ mode
Pow and mirrored Pow are actually speed-up and speed-down. You don't die by touching walls, but you can bite the dust if the mobilsuit gets squeezed by a scrolling obstacle. Upon death the currently used weapon is gone, so you need to pick it up again in order to keep firing it. Other special items might appear from destroyed enemies and by shooting specific locations: strawberries and barrels are worth 3.000 points, the cow is worth 10.000 points, the small mobilsuit gives you an extra life and the α/β icon endows the player with an exoskeleton that adds a constant 8-way pulsating shot to your arsenal while also providing a 1-hit shield. Hidden 1UPs can be found, but you also get score-based extends at every 100.000 points (they stop coming once you score half million points though).
While relatively frantic and even quite demanding at times, one aspect that always bugged me in Side Arms (either the Standad mode or the arcade original) is the fact that regular items block your firepower unless you shoot them enough so that they stop cycling. It's really annoying when you're heavily surrounded by enemies in the heat of the battle. Being a single uninterrupted mission from start to finish due to the lack of stage separation is also kinda weird, but an ultimately harmless deviation from the norm. Nevertheless the count of 12 bosses always meant 12 stages for me.
And then we come to the mode called Before Christ, where stage separation is one of the defining differences from the standard game. You'll see pretty much all original assets (graphics, items and music) rearranged in ten levels with new gameplay rules and brand-new bosses. Another important change is the adoption of checkpoints for the whole level and bosses themselves, but you also need to deal with weapon upgrades in a different manner. Flying speed is fixed and items now cycle automatically through Pow → straight shot → 3way → boomerang and back to Pow (the first item to appear is always random though). You don't need to restrict yourself to the same item to upgrade your weapon, so by the third one you'll already have it at a good level. It will eventually max out after picking up a few more power-ups.
Apart from the three available weapon choices you can also fire a charge shot that behaves just like the MBL (mega bazooka launcher) from Standard mode. This laser beam is the perfect attack to be used on bosses due to the concealed nature of their weak spots, which are only vulnerable at certain intervals. Sure you can inflict damage with your regular arsenal, but once you get the hang of the charge shot it's much better to use it. At least this was my case, so I was always switching the turbo function of my controller on (during the course of the level) and off (during boss fights). Playing with a turbo controller is a must because the only weapon with native autofire in Side Arms Special is the "auto" shot from Standard mode.
Introduction and first stages of Standard mode in Side Arms Special
(courtesy of YouTube user 8-Bit Days a Week)
Before Christ includes a few other interesting twists, such as the need to power up the mobilsuit from scratch in every single level. At first this isn't such a big deal, but since the game becomes more and more demanding as the stages unfold it's very important to find and collect the hidden yasichis whenever possible. Each one adds an option orb that not only gives you a little more firepower but also serves to absorb two hits (upon which it disappears). Up to two orbs can be activated above and below the character. Some boss battles are quite twitchy or bullet-laden, so the extra "health" provided by the option orbs certainly comes in handy.
All gameplay changes in Before Christ mode are definitely a breath of fresh air, but the greatest addition by far is the beefed up scoring system. Hidden bonus items are the same only with different values, and with each successive Pow item collected within the level you get progressively more points, starting with 200 and maxing out at 3.200 from the fifth one onwards. The biggest chunk of the score, however, comes from every remaining life being converted into 320.000 points when you complete the game. This means that in the long run the best strategy to score higher is to just not die. Besides the score-based extends (a total of eight if you manage to achieve at least 2 million points) there are also a few hidden 1UPs to be found along the way.
In all honesty, Before Christ mode is more interesting, fun and engaging than the main game itself, in whatever form you find it. It just makes the standard/original experience stale by comparison, in a rare case of a release with an arrange mode that's clearly superior to the core game.
My final 1CC results for both modes of Side Arms Special are shown below. Standard mode was played on Normal difficulty. The high score in Before Christ mode was achieved in a no-miss run (there's no difficulty selection in this case). 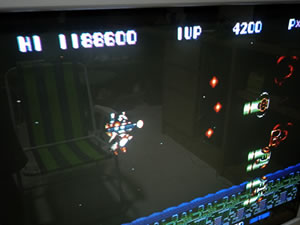 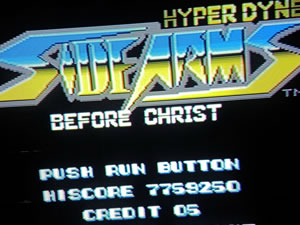