It is true that the top-down view in the shooter genre is pretty much restricted to vertically oriented games. In horizontals you normally see the spaceship/avatar from the sides. Astro Tripper, however, goes against the norm and presents itself as a top down horizontal shmup. You see the spaceship from above, kinda like an elevated guardian angel controlling its actions. I tried to list similar pure top-down horizontal shooters and couldn’t find many, surprised by how unusual the concept actually is. The only ones I could think of are Uridium, The Last Starfighter (none other than Uridium in disguise) and a few levels of the relatively recent Sturmwind.

In the case of Astro Tripper (and Uridium to a certain extent), the fore inspiration is none other than Defender. Both games ditch the automatic scrolling staple of the genre, but whereas Defender allowed unlimited displacement around a cylinder, the stages in Astro Tripper unfold in an enclosed area where enemies materialize in time-based routines, sometimes associated with generators that must be wiped out for the player to proceed – which is in fact a direct influence from Fantasy Zone, by no coincidence another famous cylinder-based horizontal shooter.

Influences aside, Astro Tripper has a style of its own. The spaceship comes endowed with slight inertia, sliding nervously across different alien surfaces as if carried by wind puffs or interstellar vacuum voids. For inertia haters, it’s actually not as bad as it sounds. 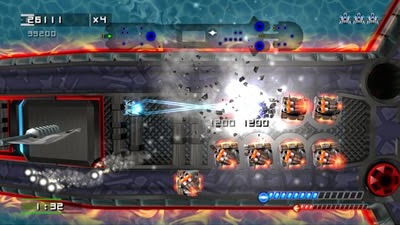 Wreaking havoc over a flying ship

“Adventure game” is where the proper fun is, with 14 stages spread in four distinct worlds marked by trippy platforms, organic environments and deadly corridors. “Challenge game” offers four options for you to play endlessly with random enemy generation in each world of the main game. Gameplay rules are the same for both of them: fire with ×, flip shooting direction with ○ and switch weapons with □. Weapons come in two types/colors: blue is the straight gun and red provides a spread pattern with limited reach. Keeping the fire button pressed will eventually “overheat” the cannons and reduce the firing rate, so the best way to deal with it is by tapping regularly (also note that point-blanking is excellent to take down enemies faster). Leveling up is done by taking the colored power-up dropped by enemies every once in a while. Instead of being forced a particular upgrade, here you can choose the weapon to be powered up just by using it – the power-up item changes its color accordingly.

Silver items are released in between power-ups, and each of these items corresponds to a score multiplier of ×2. However, the maximum multiplier you can reach is ×8 (further silver items are worth 40.000 points each). The secret to get them is to kill enemies in quick succession, as indicated by the kill gauge located underneath the score display (when the gauge is filled the multiplier item appears). Unless it’s a very crowded level, the only way to get to the ×8 multiplier is by letting enemies mount to a good number before going on a killing spree. On the other hand, extra care is needed due to the sheer amount of hazards and the fact that some enemies morph into more unpredictable creatures if you let them linger long enough on screen. Also note how some of them fill the multiplier gauge faster than others.

Waiting to cash in on more enemies is good for scoring, but the player must also take into consideration the time limit in every level. Some of these limits are very strict, particularly on boss fights where you need to clear the screen of all nearby enemies to have access to their weak spots. If the stage times out you die. By the way, whenever you die you need to restart the level from scratch.

So the primordial question is this: how much risk are you willing to take? Initially there are only two difficulty levels available. The only significant difference between them is that on Hard you die by falling off the boundary of the level, which doesn’t happen on Easy. That’s why it’s important to check and trust in the overhead map showing the location of existent and spawning enemies. A credit can be started at any previously reached world, and while that’s good to practice later levels I just wish you could also choose the stage directly (for example, in order to face the boss of the second world you need to play the three previous levels).

I enjoyed Astro Tripper exclusively on Hard, a mode that seems to be balanced around survival, crowd control and power-up strategy, in that order. Bullets are slow and clearly visible, and there’s always room to move around if you approach enemy formations correctly. It’s impossible to power up both weapons to their maximum, so do it wisely if you want to survive the cube onslaught of the Temple of the Gods, the last world in the game. My strategy was to favor blue in the first world, red in the second and blue during the rest of the game, with only one red upgrade somewhere around the third/fourth world. Extends exist and are awarded for every million points scored.

Despite some relatively empty spells in the first levels, Astro Tripper manages to provide decent shooting rush with good production values. The frame rate isn’t really on par with the finest material from PSN, but the graphics are clean and create a sleek sense of moving across a 3D environment. Tilted platforms are an example of how smart the graphic design is, as well as the fitting music and the excellent array of sound effects. The otherworldly sci-fi atmosphere is duly enriched by lots of diverse explosions and noises. Particularly amusing is the whole third world, aptly titled “Insect Infestation” and filled with deadly spores, flying bugs and serpent-like menaces.

What struck me as extremely odd is that there’s no offline high score table of any kind, but if you’re logged into PSN the highest score for all modes is always added to the worldwide leaderboards. At least the highest score is always shown locally as you play, regardless of Internet availability. As of now, the game is also available on Steam for those interested.

Astro Tripper loops on a higher difficulty level once beaten. Below in yellow is my best result on Hard after reaching stage 2-2 – meaning second level of the first world in the second loop (completing the game on Hard unlocks Hardest). Look how my two friends above me performed! 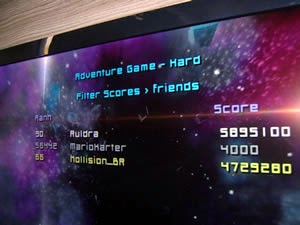