There are people who still remember the Sega CD as the failure with a library made of only FMV (full motion video) video games, and one of the sorriest flunks in Sega’s otherwise glorious history. However, if you think FMV was restricted to ugly simulators only, try taking a look at Novastorm, a rail shooter that comes out as a genuine Star Wars-like adventure in its heart. Originally developed and released for the FM Towns as Scavenger 4, Novastorm landed on the Sega CD without being given much of a chance from anyone, after all the unavoidable visual downgrade was apparently too much for people to bear. For that reason alone many gamers fling to the FM Towns original and the MS-DOS or Playstation versions as if the Sega CD entry didn’t even exist.

Well, all I can say is that if you dig rail shooters ignoring Novastorm on the Sega CD might be a mistake. Not only is the charm of Sega’s 16-bit add-on wrongly overlooked, but considering the fact that this is a game that plays vastly different from one version to the next chances are you might also be missing some precious rail shooting rush. So far I have only tried the FM Towns original, and my assessment is that the Sega CD port has richer gameplay despite the obvious limitations in graphics and color. Sure, you will crash against obstacles with confusing sense of depth or that suddenly shift direction. You will lose energy by scraping seemingly safe surfaces. You will get toasted by fierce boss attacks. On the other hand, cruising across alien landscapes, dodging futuristic architecture and weaving through giant spaceship thrusters is awesome. That’s why rising above the odds feels so great in the end.

It is the future. Once again a computer has gone berserk and is now uniting machines in a war against mankind. It’s up to you to board and pilot one of the Scavenger 4 spaceships on a mission to restore peace. There’s a whole lot of narrated story shown in good old grainy FMV during the intro and between levels. FMV animation is also present in each and every transition within levels, and also prior to bosses and during boss fights. Save for a few post-boss sequences all of them can be duly skipped, and thankfully loading times aren’t abusive. Most importantly, FMV is used to create all environments and obstacles in the gameplay itself while the spaceship, enemies, bullets and a few mid-bosses are purely sprite-based. It’s a combination that works and definitely fulfills the task of immersing the player in an outer space journey.

For each life in Novastorm you get an energy shield showing how much damage you’re allowed to take before biting the dust. The amount of energy you lose upon taking a hit depends on how severe the blow/crash is. Basic inputs consist of shot (button C), plasma cannon (button B) and bomb (button A). Shot works in bursts: hold the button for a quick stream of bullets, and when the ship stops shooting just hold it again (counter-tapping slowly is best). The plasma cannon can be charged for a more powerful blast, as seen by the overhead meter that appears when you hold down the button. As usual, bombs are initially limited to three per life. By shooting down specific enemies or a certain number of enemies in a wave you unlock a set of three items that hover on the top of the screen, of which you can pick only one. Items range from different types of shot to extra lives, however most of them aren’t exactly easy to identify. Shot types include single (default) shot, double shot, triple shot, explosion/split shot, spread shot and wave/cross shot. Other items consist of power upgrade, speed-up, partial/full health recovery (a sort of underlined triangle), temporary options (fixed, circling or trailing), temporary shield, extra bomb, extra life (looks like double/triple shot, only without the “shots”) and random effect (?).

Surviving the challenge of a rail shooter often takes successive sessions and much practice, and Novastorm is no different. Memorizing enemy routes and playing proactively is still the best strategy to win, but here the most important thing is to manage item pick-up as wisely as possible. You should power up the ship as fast as you can, since each one of those dark-blue circle items adds one slice in the upgrade meter (below the cannon charge meter). The benefits of doing that include easier clearing of enemy waves and much faster boss kills. Then there’s the shot type, of which my favorite is the triple shot. Be careful not to take the wrong item if you get your favorite weapon, the game has a knack for sending stupid items such as the default single shot. Temporary items aren't really useful because they last too little and revert your main weapon to the single shot, whereas speed-up isn’t important since the starting speed is fine (even though you cant set it in the OPTIONS). The random item is only a valid alternative in the very first area, where it might immediately give you a triple shot (I assume you must first get double shot and two power upgrades).

Provided they’re not temporary, all upgrades are preserved when you respawn after death. Note, however, that dying on bosses can also happen in a weird, different way: when a boss fight is about to time out an ALERT message flashes on screen, and unless you kill him in the next seconds you’ll die with a nice animation of the boss obliterating your ship as evil reward. Then you’ll be sent to the start of the section prior to the boss. In order to avoid that, pay close attention to the boss health gauge, a thin red line that appears below that useless radar on the top of the screen. Hit him hard on his weak spot and win the animation of victory. And if it's the stage main boss you can rejoice for having your shield fully replenished! 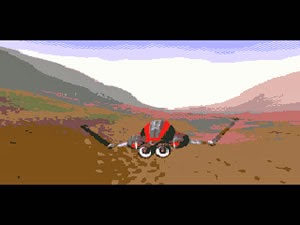 Behold the sleekness of Scavenger 4

Even though the game seems short with only four stages, each stage is divided into several sections with at least three midbosses before the stage boss. Boss designs range from insect-like creatures to high-tech constructions protected by turret arrangements, also including the mandatory robot variations. The first half of Novastorm takes place on a fiery planet and over a desert, with easy surface navigation and few obstacles to dodge. The second half sees you flying over an ice planet and the enemy base, speeding through progressively tighter trenches. Expect to face ice spikes, crystal shards, gigantic towers, wormholes, narrow tunnels, asteroid fields, heavily guarded cities and huge battleships. Just like in all other versions of the game, the visual scope is outstanding and is definitely a sight to behold, so don’t be discouraged by the absolute lack of continues. The effort to get there is totally worth it.

Getting into the third stage with more lives is always a good thing, so watch out for score extends achieved regularly (with 50K, 100K, 200K, 350K, 600K points etc., after that I stopped paying any attention because I was too busy trying to survive). In any case, Novastorm gets more fun the more you learn the importance of powering up and staying away from false safe zones – those areas where it seems safe to go but can actually cause you to lose shield energy. The music is good and the sound effects used throughout are distinct enough to always let you know items are about to pop up (love that sound) or when a boss is being correctly pummeled. On the bad side, the Sega CD struggles whenever the screen is cluttered with enemies, which leads to momentary slowdown. As for the FMV, it's true that the visuals of any Sega CD game that uses the technique will always be an acquired taste. In Novastorm some of them are uglier than usual (that brief scene showing the shaky pilot’s face looks like something straight out of Splatterhouse), but overall I think they’re used to very good effect.

I beat the game on default settings (ship speed 2, lives 3) and got the high score below. Note: Novastorm is the spiritual sequel to Microcosm, which on the Sega CD and the 3DO is also a rail shooter (not on the FM Towns or the 3DO). 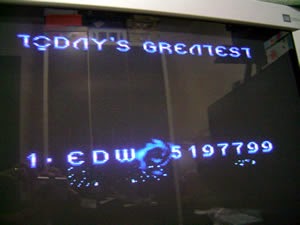